I'm kind of falling into the trap that have been the demise of so many other bloggers...I have a tendency to post pics and blurbs on facebook and then feel like making a duplicate post on the blog is redundant. I have to remind myself that I have blog readers that are not on facebook...plus...I'm a lot more 'wordy' on the blog than I am on FB.

This last couple of weeks has gone well with the horses;

Little John (the new paint horse) is just as cool as I expected he would be. It does feel a little weird to ride such a short-coupled horse and his neck sure does seem short. LOL.

Buddy the TB is actually learning how to w.a.l.k....like a true, flat-footed, 4-beat walk. He is one hot potato though, so the walk doesn't come until we have trotted a couple of laps around the field. That's okay...he needs to work on learning how to just trot too. I hauled him with to a barrel race on Saturday and OMG!!! He acted like he was back at the race track after I saddled him up and hand-walked him to the arena. Poor horse...It's very obvious he was never re-trained on how to behave like a normal horse in public after his race days. I never even got on him. He was too ramped up. I was getting some not so nice looks...could have been because he is still thin-looking or it could have been due to his ridiculous behavior. If they had only but asked right? ;-). I think the few who do know his story think I am a little crazy after seeing him act so goofy at his first public appearance...but that is just Buddy. He doesn't know how to act, so he resorts to 'race horse mode' in times of stress. He's not a dumb horse though. He's very willing to try to learn what you are asking of him. It just takes a few tries for him to get comfortable.

I put Shooter on a regular, every-other day work schedule. At first he thought it was great fun. Now he is not so sure... 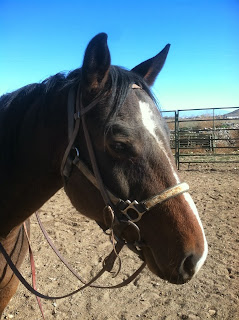 His leg is not all the way healed over yet, but the vet said that light exercise is good. At first, his leg swelled back up and he was sore enough to want to kick my head off when I tried to cold hose it, but the swelling is going down again and I slather it with a mud pack after each work-out which helps. The increased exercise is promoting a little proud flesh growth again, but I just use Proudsoff on the open wound and we are keeping it eat down. 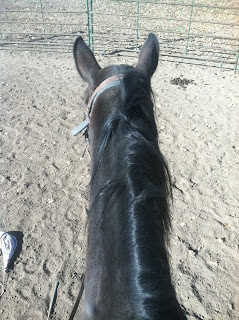 And for the first time in 9 months I got to see the backside of his ears!! OMGeee...Shooter is a long-bodied, long-necked horse anyway...but after being on Little John, Shooter is like a giraffe. Haahaa.

I haven't gotten around to working with Belle (the 2y/o) or Frenchy much. Just some haltering and grooming on them in their pens. Belle is little miss lovey-dovey. Frenchy...well...she is coming around. I moved her to a big pen with her own stall and no other horses in contact and the ear-pinning and defensive behavior is diminishing significantly. A little grain in the morning with her vitamins is helping her decide that people are pretty a-okay. I'm not above bribery. :-D.

The Big Bay is doing well. I really need to start riding him regularly, but really need a riding buddy for a week or two. I have rounded up some help for the weekends and I guess that is a start. If I could just get a couple of rides on him out in an arena, where he doesn't feel as confined as he does in the round pen, he might just be alright.

Beretta cracks me up. She's pretty chubby and she doesn't like it when the cinch is tightened. She humps and grunts around the round pen, but doesn't really have the desire to buck hard anymore. It takes a while for her to get over that portion of the lesson, but outside of that, she is bitting up well and I even stepped up on her. I'm not trying to rush her, but I know the little heifer is going to buck the first few times I ask her to move out and I think I would just as soon have that happen while she is still on the chubby/soft side. She might want to get with it a little more earnestly when she gets in better shape. LOL. And she is made like Little John, pretty short coupled and not a lot of neck. I could see that quick-footed, little monster sucking me over her front-end pretty easily if she got serious.

I took Moon and Frosty to a barrel race (the same one I hauled Buddy along for) and put some exhibitions on Frosty. He is loping the pattern so nicely now but we have had one sticking point...He is lagging on his lead change between 1st and 2nd barrel. As long as I set him and let him break gait he will pick up the correct lead for the next barrel. There is no use asking for any speed out of him until he starts figuring out that lead change cause it just messes up his 2nd turn and then he flounders around on the backside of the turn. I FINALLY got flying lead changes out of him, one each direction, out in the open field. They are obviously not pretty and he was kind of freaking out, but he got them. All that matters is that he got them!! Pretty and finesse will come. I have been pretty ramped up on selling Frosty because I really don't think he has any more speed than the black horse did and that's not quite fast enough for me. :-/. I'd like to get Frosty sold so I can keep Little John, who I think is going to be way cool. But...When he is doing so well...It's hard to want to part with any of them.

And last, but not least...Moon!! He's not in shape again yet, but I have been wanting to try his new bit in a competitive setting and the arena where they had the barrel race is one of his favorite. So I took him to put a nice, easy run on him. He liked the new bit. It's a short-shank curb, just like his old bit, but this one has a chain mouthpiece. It's very mild. It worked exactly as I had hoped it would...The little bit of curb action got Moon to break at the poll, but the mild mouthpiece let him flow through his turns, even though I 'once again' reached too far down the inside rein on his 2nd barrel. Moon was able to ignore me and still made a nice clean turn. He won the race. Yayyy Moon!!!

However, I have been noticing that he has been kinking and wringing his tail again, so I took him to the vet and had flex tests done on him. Stifles again...and this time he didn't test well on his right hock. The vet said he doesn't think that hock finished fusing. The left hock looks good, but the right hock is getting a few little lumps and bumps. I had said when he came up sore the last time (about a year and a half ago) and the vet said his hocks were fusing that I would only inject him if they didn't complete the fuse...Well, that hock didn't complete the fuse and I suspect that is why Moon got to lagging so bad on his 1st turn towards the end of the summer. If it hasn't fused on it's own by now...It's not going to and it is hurting him...So we injected his hocks. The vet also ultrasounded his stifles and found fluid around both of them this time...The vet pinged them and fluid came out...So...We injected his stifles too. I pretty much suspected these problems were the reason he quit clocking late in the summer...and that is why I gave him some time off. But at this point, after 3 months off, and he is still reactive...it's either retire him completely or inject and see if he still wants to run. Obviously, if he's still not clocking and/or acts like he is still sore...I'll just have to retire him. Moon has given me his all and if he's done, he's done, but the vet didn't think that would be the case. He thought it was pretty remarkable that Moon made it all the way to his mid-teens without any help. You just don't see that much anymore I guess, at least not at the level and frequency with which Moon runs. It's a step I didn't know if I would ever take, but here we are and all I can say is, I figured it was worth a shot.

So that's my weekly rundown. It's pretty mundane stuff otherwise, which is never a bad thing when it comes to horses. Maintaining an even keel is not always easy. :-)

Posted by BrownEyed Cowgirl at 11:55 PM

Too many bad things happening on Facebook for me. I'll stick to blogging!

Did you try the cranial sacral work on Frosty yet? I'm curious to see how it works for him.

Oh Thanks for reminding me Shirley...I was supposed to receive the DVD on Saturday, but it didn't show up. Monday was a holiday...so hopefully it is in the mailbox today.

But...in the meantime I looked up some other videos on YouTube and have been doing some work on him...and YES!!! It is helping. I massage and do some accupressure before and after riding and he is almost back to his old self about bridling.

I also realized I was letting him get too stiff in the poll when I was riding him, so I put him into a curb bit and have been making him break and soften at the poll more and working on improving his handle. He's improving tremendously.

Oh OTTBs. Only people who have experienced these horses get it. I wish people asked questions instead of giving judgmental looks. Sometimes they just need the time off before they go back into work, but I think you've got the right idea for him ;) He's in good hands.

I enjoy reading both your facebook posts and your blogs. Keep it up!

I like both FB and blogging, but you are right the details get lost on FB ! You are one busy gal! holy cow!

Keep blogging. I miss some of those who are no longer out there. I blog a lot less in the summer months - just a lot more active but pick it up in the cold months when I am home more. Some of it is redundant with FB so I try to save some pics to share on my blog.

Nice update on your herd.

Sounds like all is going well,some slow (like Buddy, he is a character he seemed to quiet on the ground) but all good stuff happening. Frenchie sounds kinda like Disco when I got her after being not handled as a broodmare for 6 or 7 years (she even got her feet done on a chute) but she had 6 years riding on her first so she came around real quick as soon as I started handling her everyday and using food too :)

what's your facebook handle? I don't think i've added you yet.