Getting Frosty Back On Track

After struggling with Frosty's feet for several weeks, I finally caved and just turned him out with the rest of the bunch. I knew he was having a bout with his IR due to the changing weather and nothing I tried worked to bring him out of it. It happened in the spring as well, but wasn't this bad. Since my pasture is just a weed-filled mess, I didn't think that whatever little bit of grass he managed to find out there would cause any more problems for him than what he was already experiencing.

He was stiff and sore for a few more days but lots of movement really seems to be key when these IR horses are having an episode, so I crossed my fingers and hoped he would come out of it before I broke down and had the vet do the bloodwork necessary to put him on Peroglide.

Up until the point that I finally gave up and just turned Frosty out, I had been anxiously waiting for a delivery of new feed for him. I have been researching and researching Low Sugar/Low Starch feeds and finally settled on Total Equine's LNSC. It's a higher protein, higher fiber, medium fat feed with a NSC (non-structural carbohydrates) of only 16%. All of that, coupled with the fact that this feed has no molasses, oats or corn AND has extra magnesium makes it pretty ideal for metabolically challenged horses.

The feed finally arrived and I have started Frosty on the recommended 4 lbs. a day (per 1000lbs), which is a little on the light side since Frosty is more along the lines of 1250 lbs. Obviously Frosty is not one to turn his nose up at any type of feed, so he's eagerly cleaning it up. Since it is in a nugget form (resembles dog food), his 2 lbs at a time has more volume than other feeds (instead of the usual 1/2 a coffee can, it take 3/4ths of a can), Frosty thinks he is getting a lot of grain and he is happy, happy, happy. LOL

Since he had already come out of his extreme tender-footedness and tight and sore muscles by the time the feed got here, I guess I will just have to wait it out to see if it prevents him from having another bout  next spring. I did have some success getting his muscles to relax by using a Back On Track sheet on him, but since his feet were so tender, he would just get tight again right away. I guess as far as things go, I am pretty lucky that in spite of acting in every way like he is having a laminetic episode, Frosty has never actually foundered during one of his IR episodes. In fact, he has by all standards, absolutely beautiful, healthy feet. It's frustrating to have a horse with such nice feet and yet is so sensitive in them.

Frosty lost a lot of weight when he was in Arizona. Weight he really needed to lose. The one thing I was surprised and happy to see was that he lost that bloated look in his barrel. Even when Frosty finally started losing that big, saggy belly of his, he still looked like he was bloated in the ribcage. I wasn't sure it that was just how he was made or if it was due to his condition.

One of the things I noticed the most about slimming down these obese horses is how weak they get to looking over their back and hip. It always seems to be the first place that they really lose weight, then the neck and finally the abdomen. I sort of figured that was natural, but couldn't help but wonder if I wasn't conditioning properly, so I talked to the chiro about it when he worked on both Bugs and Frosty. He eased my mind a little by confirming that it was natural for these kinds of horses to lose their topline and have to work to rebuild it. Both Frosty and Bugs are long-backed and both of them are very stiff in the spine. He recommended those spine flexes and abdominal lifts for both of them and lots of bending and flexing to get them limbered up and using their backs...In turn they would start strengthening up over the topline and begin to fill out again.

In my eye, Frosty looks too peaked over his hip, but upon comparing pictures of him from the last couple of years and what he looks like today, I have to say, he looks sooo much better. More useable. Now that the blubber is gone, we can get down to the business of perfecting his condition. 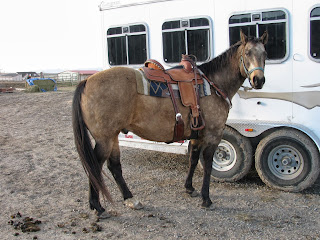 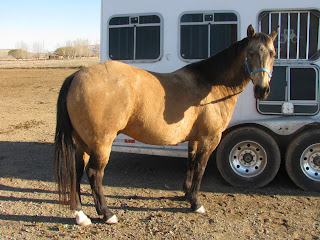 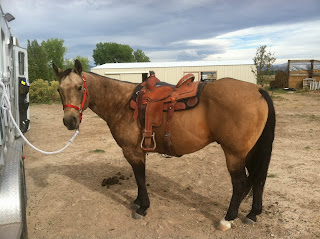 Posted by BrownEyed Cowgirl at 1:10 AM

Holy muscles, batman! Huge improvement!!! Seems weird to see an overweight horse nowadays, it seems like everyone is too skinny! Love the dapples, too.

My horse Killian has that big saggy gut too, and even when I get him to lose some weight that "well sprung rib cage" (ha!) never goes away. I, like you had just begun to believe that it was the way he was built. Much like most race horses are long and lean in the ribs. But maybe conditioning is the key!

Wow! You got the gift, he looks amazing.