The Love Of My Life 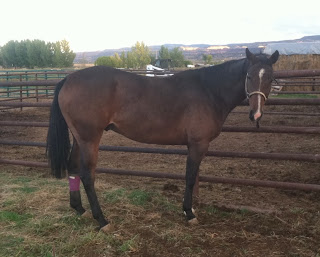 Though I have raised, bought and owned many horses in my life I only had one 'heart' horse, my most beloved Woofer. She was Moon and Shooter's mother and the grandmother to the mare I just bought. Woofer was born on our ranch and I broke her to ride as a 2y/o. The next spring I bought her from my step-mother, who was dying from cancer. All of the horses were being dispersed and I didn't want to lose my favorite filly. I was 17 years old. Woofer remained with me her entire life and was buried on the ranch she was born on at the age of 25. I can't even begin to explain the magnitude of all that mare did for me in the 23 years she was part of my life.

It was always my hope that Moon would be her replacement in my heart, after all, sometimes when I look at him, I think I am looking at her. But as much as I appreciate and respect Moon for the horse he is, I have never felt that kinship...that little something that makes my heart go pitter-pat when I see him. There is a lot of his mother in Moon. He's bossy, opinionated and incredibly intelligent. The one glaring difference is...While my Woofer was always in command, she was never mean...and Moon is a mean-spirited horse. He just cannot help himself. He lacks the benevolent factor that makes a good horse extra-ordinary.

Shooter on the other hand...He looks nothing like his mother and yet he is her all over again. Bossy, opinionated, smart, large-and-in-charge....and he's ornery...You can see the wheels clicking in this horse's head and then he gets that little twinkle in his eye and you know he's gonna do something smart-alecky. But he's not mean. He's just full of himself. Shooter is pretty sure that humans were put on this earth to cater to his whims...feed me now, brush me here, pet me some more. He's alert, observant and demanding.

So when Shooter was injured last winter in Arizona, it was particularly dreadful. Best I can figure is he stepped over the hot rope I set up to contain the horses to one side of the property, got zapped in the belly and took out the fence. The dragging hot rope got tangled in a bush and Shooter almost sawed his leg off trying to get free. I came home from a rodeo to a leg that dragged and looked like hamburger. Tendons were hanging and a whole lot of bone was sticking out. The vets gave me a grim prognosis and warned me for 2 whole months that Shooter's future career as a barrel horse was most likely over. Over and over they asked me if I was prepared for him to just be a pasture ornament...perhaps a light riding horse...if he even survived. With as much bone as was exposed and the extent of the loss of flesh around his leg, there was no guarantees.

I was prepared to live with the consequences if he was only a pasture pet, if they could just save his life!!!

Bless my husband because he never once questioned spending an astronomical amount of money on a horse that might never see competition, particularly since Shooter is a gelding. If he was ruined...then he was just ruined and that would be that. There was a few times when I questioned myself...when the specialists said there was no way to reattach his flexor tendons...and again when the vets told me his bone was splintering and there was imminent potential for his leg to break.

The one thing that was Shooter's saving grace was his attitude. One of the things the vets worried about the most was; here was a young, very healthy horse, who was used to a lot of exercise...And suddenly he was in stall confinement. That was the one thing I could laugh through my tears about when they voiced those concerns. Shooter adores being stalled. Hell, that horse would live in the house with me if he could. Spare bedroom?...No sorry, that is where my horse resides. LOL. But still I worried a little. Just because Shooter has always preferred living in his stall, didn't mean he got to. He was forced to spend a lot of time out in the pasture with the other horses, so he was used to a lot of movement and freedom.

I told the vets if they could just put him somewhere where he could see a lot of activity and feel like he was in the mix of things, he would probably be alright. And he was. Shooter adored the attention he got at the vet clinic and became a favorite. He reveled in finally receiving the kind of Kingly treatment he has always thought he deserved. LOL.

It wasn't all smooth sailing though. Shooter did become a bear to doctor for a couple of months. I had to get very creative for a little while to get his bandages changed...and we had some come-to-jesus meetings. But outside of that, Shooter has been a stellar patient and stayed happy with his living arrangement.

Awhile back, Shooter had to stay at the vet clinic while I was rodeoing. My hubby is good about doing chores, but definitely not up to changing bandages. While Shooter was there, I had my vet do some flex tests and give me his opinion on how he thought Shooter's leg was healing. I am happy to say, that my vet gave Shooter two thumbs up and told me that his career as a barrel horse was just delayed, not canceled. Spending the money to have the specialists make sure the severed tendons were laid down properly so they would attach to re-growing muscle and then leaving him at the Arizona vet's until the bone had solidified again paid off. Shooter has full flexion of his pastern and although there will be some scarring, even that looks like it will be minimal when it is all said and done.

At this point, Shooter is right on track. The Arizona vets told me 8-12 months for the wound to fill and the skin to completely cover the wound. We are at 8 months now and only have a 2"x3" gap left right in the center of the wound. I expect it will be closed up by the first of the year and then a little time for the new skin to thicken up. But I am thankful...and grateful to my hubby for forking over the money to give Shooter a 2nd chance. I was prepared to lose the competitive aspect as long as I didn't lose the horse. Knowing I didn't lose my future barrel horse is priceless.
Posted by BrownEyed Cowgirl at 3:05 PM

Aww, so happy to hear he's doing well. I know how stressful rehabbing a much loved horse from a life threatening setback can be.

Lucky you and Shooter!

Wow, not many people would have gone through all of that, and I am so glad it is paying off for you and for Shooter....your husband is a keeper for sure!

That is just awesome.

Wow - amazing that he has recovered that well. Reading about severed tendons and splintered bone didn't sound so good. :-(

I remember 'talking' to you about it when it happened. When you told me it was worse than Odin's leg I was so worried... glad to hear Shooter's pretty much recovered :)

That's great news!! I'm so happy for you and Shooter... a long road, but definitely worth it!

Hats off to you and your hubby. Seriously. Once again I have to say that you set the bar for horse husbandry. Best of luck with Shooter!