The pony vacation is over. It's always easy to judge when my bunch is ready for some time off...and just as easy to tell when they are getting bored and ready to go back to work. It all depends on if they are at the far end of the pasture or hanging around the gate.

For the last few days they have seldom left the gate area and have been talking to me whenever they see me, sooooo....I guess that means they are ready to get back to work. :-)

With all of the moisture we had there for a little while I was struggling with tender-footed horses. Made for great trimming...but everyone's soles were a little soft and a little thin from shedding. So time off was almost forced. Now everything has dried up and even Frosty, my most thin-soled horse is walking out just fine, even though they are all still barefoot. I'll probably just leave them barefoot as long as possible now too.

Buddy is the only one I was still contemplating getting shoes on. His bulging soles could sure use some relief, but I have been working with his feet regularly...mostly to try to get some manners on him for the farrier...Oohhhh...He is a dirty pig about his feet. He avoids picking them up and then pulls and yanks continually when you are trying to work under him. A.N.N.O.Y.I.N.G!! I get that some of his bad attitude is probably pain related...But believe me...Not all of it. This horse was just never taught to stand up and be polite about having his feet handled. Soooooo...We work on it.

Which of course means, I get out my tools and regularly trim a little sole down and nip a little off here and there. I am used to running into little shallow abscesses and blood spots when I peel some old sole off. It kind of freaked me out at first, but I've gotten over the 'omgee' of the condition of his feet and just keep working. He is always sounder after I work on him than he was before so I guess I'm doing the right thing.

The other day I had him out in the yard with Shooter... 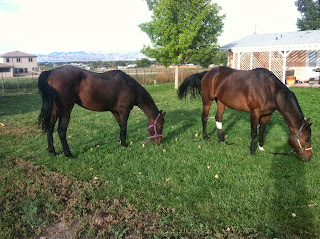 And when I went to put them away, poor Buddy could barely make it across the driveway. I was like, 'Oh crap, must need to have his soles pared down a little again.', so the next day I worked on his feet.

I wished I could get pictures of the bottoms of his feet for you, but being by myself and the the way he yanks and pulls...It's impossible to get any clear photos. His persistent nastiness about those feet may very well be why his previous let them get the way they were. Make no mistake...Buddy is a real sweet horse...but he is definitely obstinate about a few things. He is finding out he cannot bully me though!!! He's gotten whacked quite a few times with the riding crop I keep handy and he has changed a lot of his ways. He is much more polite about asking to have his head rubbed (which he l.o.v.e.s), rather than shoving it into me and whacking me around with it.

Anyway, while working on his feet, I noticed a flap of sole near the point of his frog and when I went to cut it off, he about fell on me. Oh crap!! That was not a flap...It was a ruptured abscess. It looked more like a slit than a hole and was very deep. Since it was so deep and in a very bad spot, I soaked his foot in warm epsom salt water and decided to bandage it. Don't need any infection getting up into his coffin bone. Buddy has survived a lot, but I'm not going to pour a bunch of money into vet bills for him. I couldn't remember what everyone uses and I know the sole hardener I have says not to use on open abscesses or wounds....So I had to ask around.

My vet gave me some Magic Cushion to pack in and I duck-taped a diaper on and Buddy was instantly more comfortable...

I was in the process of trimming his feet when he freaked out about something going on over at the new neighbor's. So I let him have a look-see... 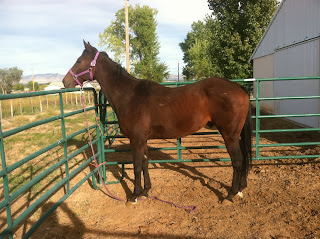 There was a pair of geese wandering around the neighbor's place, but I don't think they belonged to them. They just appeared out of nowhere that day and I haven't seen them wandering around since then. Don't know where they came from or where they went too. Buddy stood there and stared at them until they disappeared around the other corner of the house, then he gave a big snort, flagged his tail a little and then settled back down to let me finish his feet. Even though he still looks atrociously thin next to my other horses, he is really starting to fill up. Another 100 lbs and he is going to be a nice, solid horse horse. Next year is definitely shaping up to be the Year Of The Big Bay Horses. LOL
Posted by BrownEyed Cowgirl at 4:10 PM

Wow he sure does look better. I cant even imagine all the lack of care he has had in his life, poor guy. Mine too are hangin around the gates (except Jess, lol she loves her pasture time) but unfortunatly its getting cold here and I have no desire to go outside :( I want summer back again

I had my share of abscesses here this year.Mostly I use essential oils directly on them to combat any fungal infection, and diaper wrap as needed to keep more dirt out. White Lightning would be good to flush out anything deep inside that hasn't drained yet.

In all my years I've only ever had a horse with one abscess...and I didn't even know he had it until the farrier popped it out. Not even Frosty, with his paper-thin soles has abscessed. Dealing with Buddy's feet has been...ummm...interesting, but up until now he has not had any abscesses that required any special attention. I hope he doesn't get another one like this, but if nothing else, I learned how wonderful Magic Cushion is. :-)

He sure does look improved, I have had issues with abscess in the past, usually just soak it or poultice till it drains then move on but on the sole it is a lot more of an issue.If I know they have one I try to draw it out where I want it to blow if possible

I know what you mean about having the horses stand up and behave for the farrier. I try to turn mine out for a few days before he arrives and if they are being brats, I will do them long enough to straighten it out, before turning them back over to him to deal with.

Just this morning my one mare was being a twit about her 'bad leg'. He tried every which way to Sunday to get her to pick it up and let him hold it. Just wasn't happening so I told him to let it go and I would get it this weekend.

BTW- the weather changed and it has cooled down as well as raining overnight. YAY!