The Most Wonderful Dream

I woke up this morning to the wonderful sound of rain gently falling on the roof...I slid the window open and the air was fresh and warm and the dirt was brown. Not a single bit of snow...anywhere.

I thought I was dreaming...so I went back to sleep. It was such a wonderful dream that I did not want to wake up.

When I woke up again...the dream was still with me... 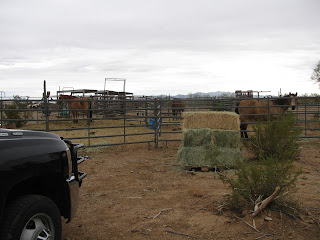 I finally made it!!

With me, I have Moon, Frosty and Bugs. I arrived much later in the evening than I had anticipated but I was still warmly welcomed by Mikey, Mercy and Wade. They had set up some nice large pens for my boys and filled water tanks. All I had to do was throw my crew a bit of hay and they were free to relax and rest after their long trip from Colorado.

It was a good trip. The roads were dry and the traffic wasn't bad. I just got left later than I was planning on because my idiot horses decided THAT was the morning when NO ONE wanted to be caught. I spent an hour and a half trudging around in frigid temps and deep snow trying to catch them. If they had only known that all I wanted to do was leave the cold and snow behind right?

Mikey and I spent some time this morning slugging down a pot of coffee and catching up, then we headed to town to get hay. Mikey showed me around Wickenburg. Lots of new arenas going up in this area. Lots of barrel racings, ropings, playdays and sorting. There is going to be lots and lots to do.

I wished I would have gotten a picture of Wade's face when Frosty backed out of the trailer the night before...even in the dark...it's impossible to miss that, A) He is a b.i.g. horse and, B) He's 'fluffy'...and I don't mean just his hair. LOL...Frosty is not exactly f.a.t....but he's not exactly fit either.

And then I unloaded Bugs. Lord...Now that little guy is f.a.t.! Wade sees these two and says, 'Geez, your gonna think we starve our horses.' Not hardly. I've got some riding to do to get my two pudgy boys in shape...but that is why they are with me.

Since it kind of kept raining on and off most of the day, Mikey and I didn't hit the desert on horseback, but later in the day we headed over to Wade's brother's for some practice roping. I took Moon to make sure and get him stretched out and see how he felt. He was feeling froggy. It took a little bit to get him settled down and working. But I don't blame him...these much warmer temps sure do make a person feel good. He finally settled in after pushing some steers around... 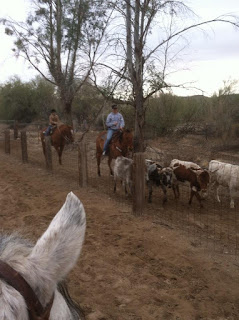 Friday we load up again and head to Lake Havasu City. I am entered in the Grand Canyon circuit rodeo up there. All that was left was the slack, which is fine. I run first thing in the morning on Saturday and then it's back down to Mikey's and I can start focusing on getting horses in shape and be ready to hit it hard in February.

Right now, you'd be hard pressed to slap the smile off of my face!!

Oh yea...And I taught Mercy how to play arena tag...I think I have created a monster. LOL. But it's all good. I didn't want to overdo it on Moon this time, but next time...It's game on! ;-)
Posted by BrownEyed Cowgirl at 9:43 PM

Happy to hear that you all made it safe and sound to AZ! I would love to be in AZ right about now. This is the first time in a few years that I won't be there for the month of February!! That is the one show I really looked forward to, just getting out of the cold and rain made it all worth it!
I am a tad bit jealous of you all down south, ok I am not gonna lie, extremely jealous!
Good luck this weekend! Go get 'em!

Welcome to the neighbor hood we are right across the pastures.

It is kind of hard to describe how I feel after reading your post. I am happy for you, yet envious as all heck! I wanna go "home" so badly. The time is coming for me, but just not yet. tick tock tick tock.
How cool that you have good friends to spend your time with, doing the things you love. Have fun!

Wonderful! Glad you all made it safe and sound. Enjoy the warmth and the dry.

How Cool! Glad you finally made it down. Now I have to get one of the horses going enough so I have something to ride with when you make it out this direction. Might take me a while though...

Glad you made it there safely , so now I can hate you and be sooo jealous!! well hate is a strong word, enjoy!

Sounds like a dream come true for sure! I read you placed well in the barrel racing~ way to go.
I hope you were able to take a few more pictures of the AZ crew before you headed for home!

Oh how exciting! I too am jealous of you being in warm weather though. But enjoy it for me too :)

I just had to read this post while we're going through a heckuva cold spell... jealous now. Love ya/hate ya lol
Kick butt at the rodeo!