Not Exactly The Way I Had Planned


Looks like I will be doing a courtesy run on Spooks on Friday.

The chiro worked on Moon on Monday, I ponied him on Tuesday morning, left him in the round pen because Beretta was out in the pasture and Moon likes to chase her. Ponied him on Wednesday and turned him out to pasture with the rest of the boys. I was poking around the yard all day, kind of keeping an eye on everyone because the chiro didn't want him chousing around, but all they did was wander around and graze. Got everyone up in the evening. Ran my hand across Moon's back and he about had a seizure.

I cold hosed him, DMSOed his loin and waited til morning to call the chiro.

Chiro shows up today...Frowns at Moon's reaction to pressure across the loin.

Checks him out, says he's not out, but he is not sure what is going on...and we all know what that means...

No way is he in any shape to run.

I talk to chiro about alternative remedies to ease the soreness...

He agrees icing his back is a good idea. No more DMSO though...heat may reduce the noticeability of the muscle reaction, but it brings the inflammation level up.

I asked him about having my farrier use his electromagnetic shock therapy machine on him and he agrees that would be a good idea. Acupuncture probably isn't the route to go.

Also, no more pasture turnout. The 50' round pen is plenty of space and the ground is nice and level.


Poor Spooks...he got stuck as back-up. I sure as hell know we aren't going to be winning any money...but oh well....I'll just give a little Queen Wave as he lopes his way through the pattern. ;-)

On a little better note, I went ahead and had the chiro check Beretta's hips while he was here and he got her leveled out really nicely. Beretta still travels a little 'off' once and awhile due to her hind fetlock injury, but the chiro thought if we adjusted her every 3-4 months, we could keep her hips leveled up nicely and hopefully improve her future outlook. I'm all for that because I sure do love my little girl... 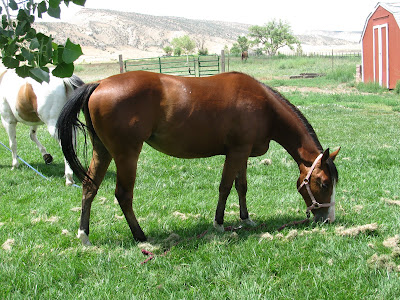 Her chest has taken forever to go down...even with cold-hosing every day and alternating DMSO and External Rub. The vet said there wasn't anything he could do unless it developed a 'water bag' (mushy feeling). If it did that, he would come over and lance it. Well, actually he told me, *I* could lance it...to which I gagged at the thought of and told him, 'No Thanks...I was perfectly willing to pay him to come do that.' (Gak) So it has just had to slowly go down on it's own.

This next couple of weeks is going to be hell on the pocketbook...Equine dentist is coming, Electromagnetic therapy for Moon, Acupuncture for Frosty and Turk...to be followed by adjustments...I'm sure by then someone will need to have shoes reset....

Paying dues? I know what you mean. Getting everything fit to Kat, for Kat seems to be costing me a small bundle.

Certainly lends some truth to the phrase Ya gotta pay to play. Boy, ya got that right!

You have my sympathies there. I actually cancelled my own dental appointment today because I'm just tired of my pocketbook bleeding all the time. My teeth feel fine. I'll save the money for the next horse injury... which by my estimate should be happening within the next 24 hours.

If it ain't one thing, it's another... Hope you get Moon's issues resolved soon. I hate it when they're hurting. **silly grin at the thought of you doing the queen wave off Spooks***

I'm anxious to see what the farrier comes up with. The chiro thinks Moon may have 'dropped' a vertebra as there is a divot where his L1 and L2 are supposed to be. I don't believe that is normal for Moon. The chiro tried pulling his tail to get those to release but Moon's muscles were too tight.

Hopefully the electromagnetic shock therapy releases them and we can get those to pop back up.

So now we are going to have to rethink his shoeing job as well. We put regular shoes on his rears to encourage a bit of slide, so Moon would stop stabbing his toes (which was causing his hind fetlocks to get sore) and make it easier for him to get up underneath himself in the turns. It might be too much.

That sucks , hope he gets feeling lke himself soon! Enjoy coasting on Spooks and lull everyone into false confidence till you rip it up again with Moon!

aww Poor Moon, hope you get him figured out soon!

Aw damn :(
Sure hope Moon gets fixed up... BUT Frosty will get some seasoning right? ;)

Gonna zap you an email about a product. Wondering what you think of it.

Hope he gets well soon! Back injuries can be bloody hell to figure out. Heat is the ONLY thing that works for me, but I ain't no barrel-racer..
How are his kidney functions?
Just a silly thought, that would cost MORE $$. So, I stfu.
(and the net heaves a huge sigh of relief..)

You know what GL...Kidneys crossed my mind too. I was going to stop at the vet's and ask him about that/what he thought/what kind of testing there was.

Moon urinates normally and his urine looks to be the same color and the odor is not abnormally foul...

(Good Lord, the things we inspect to make sure our horses are 'normal' right?)

But it is worth questioning that avenue as well.

Yes-Cdn...Last night I was feeling a little depressed...it's a long drive to make a 'courtesy run'...but I kicked myself in the butt and reminded myself that this may be the perfect opportunity to make myself put a little effort into bringing Frosty up the ranks. It's not Spooks' fault he's didn't end up being quite fast enough. He's done remarkably well for this being his first year.

I have no shortage of horses damn it, I just need to get my butt in gear and finish putting a competitive 'string' together.

Oh and I was going to say GL...I also thought heat was the best thing for a seized muscle...or at least alternating heat and cold. That's what works for me when my back seizes up...

Last night I just left the poor damn horse alone. I'm sure he's tired of having that area poked and prodded. He gets to just 'veg' for a day and tomorrow we'll see what we have.

Aaargh...yup the conflicting advice craziness! And then it get all complicated again when something that works like a charm on one horse doesn't work on the other. It seems to run in streaks, too. My dog got foxtail grass seed embedded between his toes, had to order him booties...the QH had a horrible fly mess on his belly, doctoring that...other horse got a scratched chest and the gnats got him, doctoring that...and hubby threw his back out. Noooooooo