Honestly, you would think that the way I go on and on about that silly dun horse of mine, he was the only one I've got...

He just kind of took over my brain this year. I told myself in January...This was it! Our do or die year!

It's taken a long time to find that 'happy' place...but I think we are there. Nothing but continued competition is going to finish getting us seasoned.

I didn't let everyone else go completely to pot, but I sure wasn't putting in the time on them that I had been earlier this year. They just kind of became nice distractions from thinking about the seriousness of competition all the time.

I started hauling other horses with me, mostly to get them exposed to the goings on at the competitions. Other horses, traffic, loudspeakers, the hauling, the standing tied, drinking out of buckets, eating out of hay bags...Pretty much all of the stuff that turns your 'World Champion At Home' into a frenzied, melting down mess in public.

Frosty sure enough had one of those episodes at a barrel race this year. I was quite mortified. But since then, he has been pretty good. I have learned how far I can push him and each time it gets better. We can actually sit amongst a group of horses now. Still no dice on having horses lope toward him...but his reaction has been reduced from spook and blow up to just a spook and whirl. The girls have been very decent about it and I am very careful not to get myself or them in the middle of a shitstorm.

All of the hauling has done wonders for the saggy-belly boy... 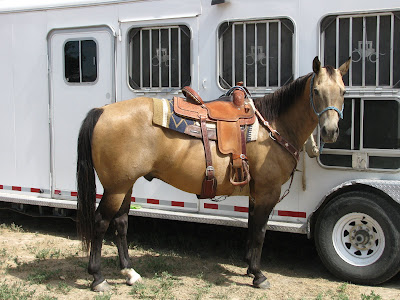 Sometimes I glance at him and think he is still kind of fat, but he's not. He's a big, solid gelding and that is all there is to it. He will continue to change and eventually look more fit, but I still think his system is not 100%. It obviously takes a long, long time to get a horse's system working properly after they have suffered a long bout with IR. He doesn't have a lot of stamina and his energy levels are a bit radical.

I did get shoes on him this year. First time he's ever had them and he was such a good boy about it. He has always been kind of platter-footed and IR made him very tender-footed, so I finally decided it was worth it to see if shoes would help. They have. He is getting much more supple in his shoulders and is back to using his hind-end like he is built to. The horse has no lack of booty on him... 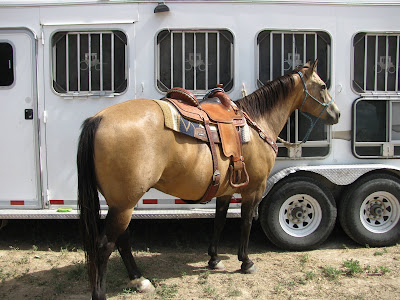 and he has a much hock set than Moon. He is built to really drive from behind and get up underneath himself...when he wasn't doing that anymore...I knew something was not right.

He's riding a lot better and when I took him over to L's house to practice barrels on...she was amazed at how well he turned them. I knew he could turn a barrel...just haven't been able to spend the time with him like I should to bring him along. I'm hoping to stick with him the rest of this year and be able to compete on him at the NBHA runs. 'Compete' might be a misnomer because I won't be pushing for much more than to get him to be able to make a 4D run. That would mean he would be running 2 seconds slower than the top horses. Which is a pretty significant margin.

Now I don't know if Frosty is as fast as Moon in a straight line..I've only ever gotten him up to about 3rd gear and that was plenty fast for me...not knowing if he was going to stretch out and run or if he was going to suck back and buck me off and all...but I do know that the actual act of turning the barrel is a lot easier for him than it is for Moon...so it might be kind of close as to who will be Top Dog when Frosty actually does learn how to run.

Seasoning him is going to be the trick...whereas Moon sees and hears nothing that concerns him when he locks onto a barrel...I am doubtful Frosty will be as single-minded. I see spooks from the chutes and the grandstands and flags and noise in our future. I am just praying that we don't get the suck-back and blow-up reaction that he is so well known for. ;-)

**I wrote this post last night, but decided I wanted to wait to put a picture of the slimmer version of Frosty up and wouldn't ya know...He was a total shit this morning. Tried to blow up when I went to get on, so I lunged him for a little bit first. I am NOT afraid to use that lunge line with him. LOL...Ground is kind of hard this time of year. ;-) Ended up just going for a ride in the desert rather than get to practice him. I had to up his oats a little bit because he just did not have any energy in this heat. I guess it kicked in. LOL

The question may be when I start running him...Are they going to give me a time or a score?

If you are both good for 8 seconds...

Frosty's so cute. I'm glad you're getting the IR figured out with him.

OMG I LOVE his bum!

Frosty is a very nicely built boy!! Love 'em stocky! And the bigger the butt, the better!

Hey, let us know and we can all place our bets!

Haahahaa-Yea...If I could ever get my spurs up to his shoulders to mark him out, I might score well. Problem is, he usually dumps me to fast.

I bet he's built a bit like Applejack... big and thick, looks ok without a saddle but when you tack him up there's that optical illusion that makes him look chubbier.

If you stay on for 8 then you get a score, if you make it around the barrels then you get a time. Maybe you can be the first to get both. Then what do you win? LOL!

I say try for both! A dual purpose horse is worth more! LOL He's definitely nice to look at. :)