That Cussing You Hear...

...Is me having one of the worst weeks e.v.e.rrrrrrrr!

I go pick up the sorrel horse from the trainer... 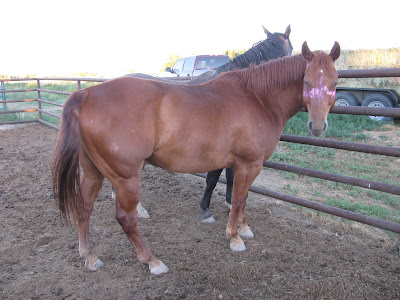 He looks good huh? Even with all of his 'war paint' on...I know he's been ridden, but he never did get ridden outside. The WHOLE freaking reason I sent him to the trainer. Trainer's reason for NOT riding him out in the desert?

(I'm not even go there. I was afraid if I opened my mouth...It would be ugly from the first word. I just loaded my horse and left.)

(I seriously thought about driving off and disappearing. I daydream like that sometimes. I do NOT do drama.)

I ran at Rimrock on Tuesday. Moon didn't feel right during warm-up. He was not lame and I could not find any indicators of what was wrong. He just did not feel like...'Moon'. But he ran well. Pilot error caused a blow-by on 1st barrel. We placed 4th...They only paid 3 places.

I decided it was time to go ahead with the shoes...I'll explain that more in detail later...


However...I always turn Moon out to pasture after a run. I think it alleviates a lot of muscle stiffening/soreness if a horse gets a chance to keep moving. Because I knew I was getting shoes on Moon the next morning, I decided to just let him have a day off and let him loaf in the pasture with the rest of the herd. That evening when I went to get him up for grain, he was lame.

Since it was too late to do anything about it that night and I knew my farrier would be able to help me pinpoint what was going on...I just left him out for the night.

He was much better this morning, but still 'off'. The farrier determined he was out in his mid-back and sore all the way over his left hip to his hock. Had the farrier go a head and shoe him.

(Oh great...I'm entered in two rodeos this weekend and I immediately start wondering if I need to 'vet out'.)

Went with event shoes on the front... 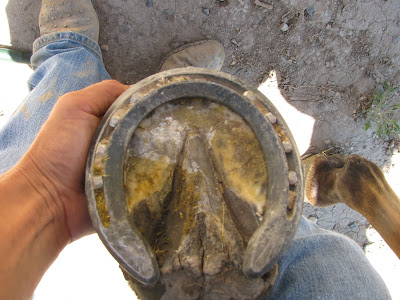 And plains on the back... 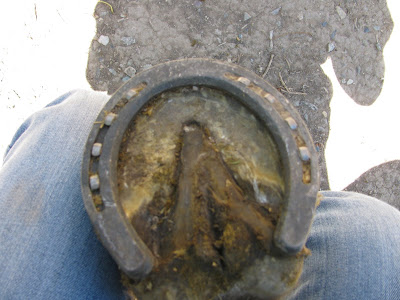 I called a friend, got her equine chiro's number and scheduled an appointment for Moon. Figuring worst case scenario, I can have him worked on, see what he is like in the morning and then decide if I need to have my vet give me a vet release so I can vet out of the rodeos.

Chiro agrees to see Moon, but it won't be til late in the evening. I bring Moon home. Gather the rest of the herd from the pasture and find that the scrape Turk picked up last weekend has causes his whole lower leg to swell... 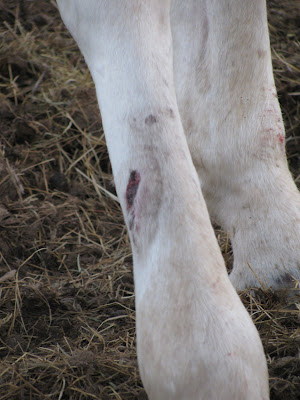 Seriously, it was not that big of a scrape and I swabbed it with Swat to keep the flies out before turning him out.

So that needed cold-hosed and doctored.

Before doing that, I go catch Beretta so she can go out to pasture and graze for a few hours and find this... 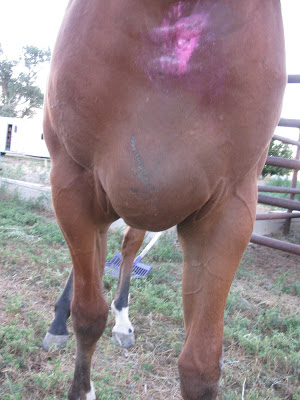 Really? It hardly seem possible that I did not notice THAT this morning. I did notice she had a scrape on her chest this morning...so it went from that to THIS in a matter of a few hours?

I have no idea...My only guess is that she ran into the pipe fence?

I said to hell with it and turned her out on pasture for a few hours. Movement usually helps these things go down. When I got her in this evening I cold-hosed it and rubbed it down with External Rub. I guess I will have to see what it looks like tomorrow and may have to get the vet out for two horses.

Loaded Moon up...again...took him to the equine chiro and had him worked over. If you could call it that. I didn't even to think to ask my friend if the chiro manually manipulated or used mallets. I don't think the mallet crap works worth a shit and of course that is what this guy uses. Hell...I could go buy myself a couple of rubber mallets and tap on my own horses muscles for all that effort seemed worth...and it cost me $60. I was nice though. My bad for not asking and he was kind enough to get me in on an emergency.

On the way home I called my farrier. We are going to see what Moon feels like in the morning and if he is still sore, the farrier swears he can use his electromagnetic machine and fix him up. I should have just had him do that this morning.

So I get home and get to cold hose my 3rd horse of the day. I figured the best thing to do at this point was cold hose him... 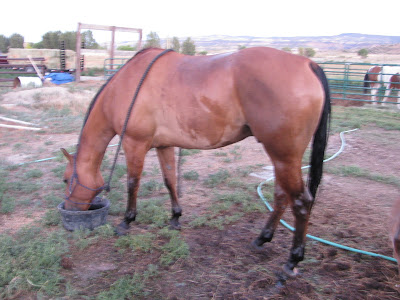 And DMSO his back, hips and hocks.

I don't know what Moon did to his back. I'm guessing he was just getting sore already (which I attributed to his feet) and running on Tuesday was the one run too much.
Posted by BrownEyed Cowgirl at 9:33 PM

DAMN girl you ARE having a hella crappy week!
Those ponies are sporting an awful lot of pink :(

The trainer, omg I'd be SO pissed. You were clear with him about what you wanted done with the sorrel horse, if he never intended to take him out because the horse was barefoot he sure as hell shoulda told you that.
I know you mentioned he's a young guy trying to make a go of it but crap like that is what costs a young trainer future clients.

Hope everything in your world rights itself in a hurry, you've had enough crap for awhile!

BTW, the phone thing... I just upgraded my phone and had to enter everything manually. I think my old bberry picked up a virus so I didn't want to risk transferring it to the new one.
What kind of phone did you end up getting?


Chin up girl. This too shall pass, one way or another.

And you can always head south to melt (or drown, depending on the humidity levels) with those of us on the east coast!

Hmmm, Beretta's chest, any pigeon fever in your area?

My week has sucked too, so you aren't alone!

good grief! maybe you will wake up from a dream soon. as for your cell phone - check the nearest pack rat nest. not kidding.
- The Equestrian Vagabond

Yikes! That was one shitty week! Hope things turn around for you and fast!

that is a shity week:( Sorry to hear. Always seems to pour can't jsut be one thing. Hope all gets better quickly. I will text you so you have my number. Miss ya!!!

You need to go to Vegas - surely you've used up all your bad luck!

Good heavens! When it rains it pours, doesn't it? That's some insanity right there. I nearly gasped when I saw that chest. That's huge!
Shoes look good! Hope Moon feels better soon.
Hope your luck changes quick. What a week!

When it rains it freakin POURS! Seems like it has been going around, too. Thankfully not much to report from here, but that's because it's the way it's going. Not much happening...

You probably already tried it, but when I lose a phone, I call it. Even on vibrate- they make noise. If it is on silent or the battery is dead- you're outta luck.

Wow - you did have the week from hell. Hope the weekend is better!

Holy mackerel, well that gets it all out of the way in one fell swoop!

Been having a couple of weeks like that...hubby hurt his ribs, family drama, dog hurt his foot, water went out...really...it's so kind of you to keep me company! Now I want everything to be smooth for a while doggone it!

Argh. What a frustrating week. At least it's over - hope things get better next week!

Well, we are running this weekend. Moon is better. The vet gave me some Bute and told me to lay a bag of ice on his back until it melts before I run and again after we run.

I am apprehensive, but have professionals that I trust telling me this comes with the territory and I better learn how to deal with it.

My phone has been replaced with a new i-phone.

Vet also verified hematoma on Beretta's chest. Pigeon Fever also crossed my mind when I first saw it. No reported cases of it around here though. Movement, cold-hosing and DMSO in order for Miss Beretta for a few days.

I'm hoping the shoe job eases the stress on Moon's hind legs. Will know how it works after these two runs.

I guess the old saying, 'What doesn't kill ya, makes you stronger.' is in application. I blame it all on the moon.

Horses are always trying to find a way to have you call the vet, chiropractor or shoer. Mine talked it over and took turns. I called lady's phone for 30 minutes while she and her son walked all over the park looking for it. The ringer was really low, they almost stepped on it before they heard it. I haven't found a decent trainer since you left AZ.

Wow that sounds crazy! So glad Moon is better and you know what to do about Berretta, but wow, things gotta be gettin better soon!

Well, maybe you're getting it all out of the way now.

Have a great run this weekend, hope Moon feels better!

That was enough crap to last a while, bet things look up now. Have a great run this weekend.

Have a good run! Glad that it's not pigeon fever, cuz that would suck even more and for longer.