Moon and I are tired. This has been a long season already, lots of runs, lots of changes and I think both of us need a break.

In spite of the drama before we left for the rodeos, Moon performed. Not up to his usual standards. At Montrose he did not fire and even though he had a nice, solid run, we were no where near being in the top.

The vet told me to give him 2 grams of Bute before we left for Montrose and when I got there to put a bag of ice on his back and leave it there until it melted or I had to saddle up.... 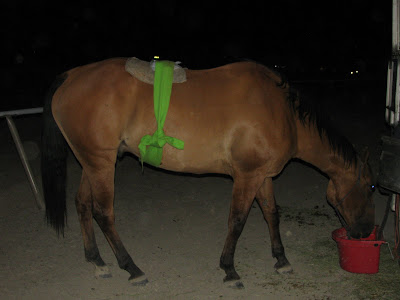 This is funny....I no sooner got Moon's ice pack situated and strapped down and this lady come running up out of nowhere and asked me, 'What's wrong with your horse?'

I was kind of startled. I have no idea where she came from. I was parked way in the back along the horse track and had Moon on the off side of the trailer. I wasn't hiding him or anything...there were horses tied to another trailer beside me and this way he was out of the way.

I told her his back was sore and I needed to ice it. She stood there watching me for the longest time. It was a little un-nerving, but kind of funny. She never said anything else to me, so I just kept going about my business and the next time I looked over, she was gone. I have no idea what that was about. I'm not really an anti-social person. I'll talk to anyone who wants to talk to me...unless I determine they are a dumb-ass and then I'm done...but I find a lot of people exceptionally strange these days.

My Honey and I spent the night in Montrose and left for Norwood bright and early the next morning. I was up in the slack at 9 a.m. and was the 'gunner' (first runner).

I gave Moon 2 more grams of bute, even though he showed absolutely no soreness. I wasn't sure if the up and down, twisty mountain roads would cause him to sore up again or not, so better to be safe than sorry at that point.

Moon was definitely awake at Norwood. But I was disappointed in the ground. They didn't water the ground until after 8 a.m. and they got a little carried away. Even after the ground was worked, I knew it was going to be slow. It just looked and felt sticky. It sure was, Moon got hung on both his 1st and 2nd barrels...

The big blow-out at 3rd barrel was totally my fault. I carried my bat with me to encourage Moon to run a little harder to 1st and for some ungodly reason, did not switch it from my left to my right hand. I'm just not used to carrying a bat anymore I guess. When Moon went to set into the 3rd barrel, I tipped my hand, Moon saw the bat right there by his eye and just blew away from it. I was like, 'What the hell?', realized he was spooking from the bat, dropped my hand and he took off running again.

One thing I really noticed in this video and sort of felt the last few runs, was the fact that Moon's strides are off in his turns. He's kind of scrambling and getting a lot of hang time. Surprisingly, considering the big blow out at 3rd, we ended up having one of the top times in slack, but the performance runs the night before had been quite a bit faster, so we we still nowhere near the top.

It's just time to skip a week of running and go back to the practice pen. Moon needs to find his strides in the turn again and we both need a chance to get our fire back.
Posted by BrownEyed Cowgirl at 10:10 AM

Sometimes you just gotta step back and slow things down. If Moons' back is sore- now is a good time to do just that.

It can be tough to do it when you have been hitting that sweet spot and things are going good. But then that's the reason too, when people are running strong, out ahead in the standings, they will skip a competition or two because they have the breathing room to give their horse and themselves a break.

I see what you mean about the 3rd barrel. Oops! I still think you two rock and your times are great :)

I gotta tell ya , watching that run , once you have it all together , you and that Moon are gonna be unbeatable! Man can he move!Just watching him on the run in I was ,thinking wow! and he is off????

Sometimes a rest is just the thing to improve performance, and with his sore back Moon will likely appreciate it. Here's hoping you two come back firing on all cylinders!

Poor Moon. Hope he gets his zing back. And you too, missy!

'What's wrong with your horse?'

Mostly he's got no fashion sense judging by the lime green cummerbund...

Glad you're gonna take a little break - you and Moon both deserve it. I love the ice pack tied on his back!

Well, if his back was still a little sore it could sure make getting into and holding the ground well enough to get his striding around the barrel tough. I love to watch him. He looks a lot like my best buddy stallion I lost in 2006. They profile exactly the same.

Nice run, and it does sound like it's time to let the changes soak in a bit. You are looking much more confident together, starting to figure out the groove. Yeah, it's close! Moon sure looks like he's enjoying that ice pack!

If I rode as many as you do a day I'd be tired too.

And not worry those weird people are at horse shows too. And ya when I am busy i will still talk but I'm not going to stand there and entertain someone. People are strange.

Hi BEC: Just one of my usual stupid questions -Why would a Horse be considered 'Too Hot' for barrel racing? Is this an 'insider' term?

Helen-My first instinct is that it is a horse that they already ran barrels on?

'To Hot' sounds like a redneck term that ='s 'We blew this horse's brain and cannot get him in the gate anymore.'

Since everyone knows barrel racers typically like hot horses...can you imagine what a fruit-loop this one must be?...and if he's/she's too hot to run barrels on and they never have...I'd say it's probably too hot (whacko) to do much of anything else on either. LOL

Nope BEC the Horse is beautifully trained, well mannered and quite athletic, which is why I thought ,maybe, the term,itself, was something used by barrel racers to describe some sort of behavioral problem unique to the Sport. Thank You Hon, You've helped a lot.

*elephant in the corner*

If your horse is so sore you have to ice his back, and you're giving him bute ...

Isn't it time to take more than a week off?

Is bute legal in your local region? In many equestrian events, it's highly illegal to compete a horse on bute ...

Their wording sure wouldn't make anyone think it would that nice of a horse.