Spooks is an absolute pig when it comes to mud... 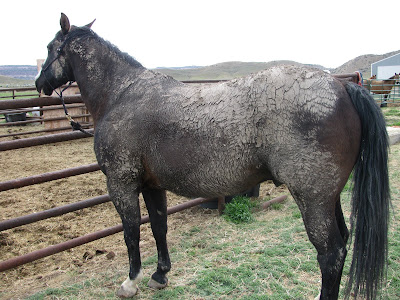 I haven't seen many horses that love to wallow in it as much as he does. Oh sure, they all like to get down and roll around in the mud...but he wallows and then just lays in it.

He had to have a bath before I could even saddle him.

Today was the first day that Spooks has ever picked up his left lead without me having to employ some sort of stop and roll-back tactic. It surprised me so much that I almost rated him down and employed the stop and roll-back before I realized he had the correct lead off of my cue.

I always start with preparing him and giving him the cue. Just checking you know. Gotta give them the opportunity to do it right to see if they are actually learning anything. LOL

Thinking it was a total accident (although, still a break-through), I let him lope a complete circle, rated him down, trotted for a few strides and asked again. He almost didn't pick it up the second time, but at the last second, he lifted off in the left lead again.

That only took almost a year to accomplish. (Sheez)

Here's the thing...Every since last summer when Megan decided she didn't care to ride Spooks and I took him over, I have been working out different issues on the horse. His teeth (which weren't as bad as we thought they probably were), his feet, I had an old scar on the inside of his hock checked to make sure that wasn't hindering his ability to lift that leg properly, his feed, and his body condition. As I have worked through each 'issue' that I thought was causing his inability to properly lift that hip to engage that lead...I have worked from the ground up. Til the only thing I could think of was the problem was something going on in his hip. It has been in my plans to get the chiro to work on him and do some accupuncture. Since I seem to keep missing her, I talked to my farrier about using his electro-magnetic gizmo-thingie-ma-bob. He uses it on all of his reining horses to alleviate soreness problems.

Last week, I looked at my bottle of DMSO and thought about trying that on Spooks' hips and shoulders. I have done a lot of reading on the uses of DMSO since I broke down and used it on Beretta's knee. I was still a little hesitant to use the stuff on anything but the legs, but finally decided that I would try massaging some of that into Spooks' hips and see. It was nice enough that day that I figured if it made him too uncomfortable, I could wash it off.

Boy, it sure enough did heat up over his hips and he kept looking back there, like 'What the heck is going on?', but he didn't seem terribly uncomfortable. I left him tied up there while I saddled another horse, still no other reaction besides looking at his butt. So I turned him in the pasture. He took off trotting, jumped and kicked out to the side (being a brat) and promptly dropped and rolled. I watched him for a while longer, but after he rolled, he just went to grazing, so I rode the rest of the horses. By the time I got him up for the evening, there was no longer any heat where I had applied the DMSO and he seemed to be walking quite free.

Soooo...I don't know if the magic of DMSO finally helped break up the tightness across Spooks' hips or if everything else I have been doing finally kicked in? A combination? I don't really know...but I rubbed his hips with it again after riding him today and will have to see if he continues to gain ground. I don't think it's something I want to do everyday....maybe once or twice a week? But maybe I won't have to spend another $150 on getting him worked on by someone else.

It's kind of amazing really if this ends up helping that much. I've read all kinds of testimonials about how DMSO has helped people and animals with inflammation, arthritic problems, bursitis, splints, bone chip pain, etc, etc. The heat alone is intense and deep penetrating. One of the claims is that it increases circulation. Since it is a 'carrier', it seems to scavenge and carry the bad stuff out of affected joints as well. Maybe it really did take something as strong as the DMSO to start breaking up the tightness in Spooks' muscles. I know the Vetrolin massages I was giving him sure didn't seem to help much. I'd noticed a mild improvement in his shoulders, but nothing across his hips.

I don't seem to be affected by the 'garlic' taste many people seem to get. All I get is a slight metallic taste. I know one thing...I used it on my aching wrists one time and bam...the pain was gone and has stayed gone. I still use gloves to apply it to the horses though. Interesting that all of these years, I have avoided the stuff because of it's intensity and the warnings about it and now I am finding it to be so beneficial. I guess those 'old guys' knew what the heck they were doing after all. ;-)
Posted by BrownEyed Cowgirl at 11:18 PM

That's great about Spooks (well not the mud! It looks like stucco!)...hopefully the DMSO helps him even more. I'm sure all of the other stuff (feet, teeth, feed, etc.) helped too - having that stuff sorted out builds a good foundation.

I have two friends that swear by DMSO. I don't get the weird smell either and apparently that makes me very lucky, lol

I've never used DMSO but sure would if I had to. Its great that Spooks is picking up his lead now;and its a testimonial to how tightness and pain in muscles can affect a horse's performance. So many trainers would treat it as a training issue and force the horse to work through its pain.

Laura-The horses sure taste it. LOL...within minutes of applying it, everyone starts licking their lips and smacking their mouths. Sure makes a person realize that you have to make sure they don't have anything on them that you don't want carried through their system.

Shirley-It's definitely been a process bringing these mature geldings back. A person doesn't think that anything happens to them when they are simply left in the pasture, but I've been amazed at the physical deterioration. Stiff muscles, stiff joints, awkwardness and a much increased conditioning time. Maybe if they had received the correct training in their youth, it wouldn't be as difficult for them, but my brother is a working cowboy (not that that is a bad thing) and the finer aspects of training a horse to perform have always eluded him. He counted on the natural abilities of his horses. When the horses were younger, that was not so much a problem. May not have been a problem if they had kept being used, but left unused for years-they just bulked up and got stiff. I figured it took them 5-6 years to get that way...I couldn't expect them to become ballerinas in a few months. LOL

Molly has a touch of arthritis in her hocks, on top of everything else going on with them. I put her on straight MSM this winter and it seemed to really, really help! (Molly's like the older geldings you talked about- left out to pasture about 5 years and a total mess now). While I've known about the DMSO for years and years, I've been hesitant to try it since getting back into horses as an adult. I may just have to give it a try as soon as I can wear shoes and visit my ponies again.

The electro thingy your farrier uses? Is it a tens machine? Tell me more! How does it work? What does it look like?

That's very good news about Spooks. Getting the lead correct twice in one day without extraordinary measures is cause for celebration.

I'm used DMSO on splints but nothing more. Maybe I should break it out too. I have a couple of horses with lead problems thanks to Richard. I should be beaten with a wet noodle for having anything to do with that man.

That is an impressive coating of mud!

ha, tad used to come in like that every freakin' day. Clay mud. Hard like pot. I needed a chisel for his mane, I swear.

As an old fart, I used DMSO back when one of my schoolies hooked his leg in a "boarder's) WAY too loose halter, and "corded" the tendon. That tendon went down. Like quick down. Amazing stuff, to be used only when really needed. Glad Spooks enjoyed it all, what a lucky beast to have your concern!

I love DMSO - used it a ton on an accident prone little colt I had. I bet it did help.

Hmm interesting, I havent heard of DMSO is a long time, but used to use it, maybe need to try it again if i need it.

That's great about his leads. Hopefully the DMSO is doing the trick and he'll continue to improve. I've never used DMSO on my own horses, but it's interesting to hear how it has helped other people's horses.

I know people who swear by using DMSO on themselves for inflammation. When I worked in urology, we used it as a treatment for interstitial cystitis and instilled it into the bladder. Those poor people not only had the metalic taste immediately, but the smell of garlic oozed from their pores. They said that it took two days for the smell to go away, no matter how many showers they took. BUT...it made their bladder feel 100 times better, so they continued with their treatment.

I know that it worked wonders on the few livery horses we used it on and would use it on Estes if I thought she needed it.

OMG Spooks! What a mess! I thought Brandy was bad about getting muddy, but that is BAD!
We use DMSO a lot at work. I have never used it on one of my horses.
That's great that he was able to pick up his lead a couple times and hopefully the DMSO is helping!

wow what a mess! That's something my gelding would do... he loves to get down and roll around, especially if there's some mud out there!

Looks like my Colt & your Spooks were in the same mud bath competition!

I used DMSO a very long time ago on a horse for something I can't even remember now...but my memory recalls that it didn't do much.

Hope you get to feelin' better so you can compete next weekend...probably a good choice not to try it this weekend.