Of course I caught a cold.

I tried to outsmart it by taking naps, hoovering up all food in sight, hot showers and snorting Zycam...but it didn't work. I guess I just got too chilled.

I hate being sick. I almost never am, so I think that makes it worse. It makes me a very grumpy squirrel.

By yesterday afternoon, I was begging someone to just shoot me. Today, I'm thankful they didn't. But still don't feel so hot.

Now I'm not so sure I will go to the barrel race tomorrow. Meg didn't ride Moon on Monday. I rode him Tuesday and Wednesday, but didn't work on the pattern. Had to beg off riding yesterday and am not so sure I feel up to it today. He needs his feet trimmed too and I know I am not up to that.

Naw...it's probably not worth it to try to run this weekend. Bummer!

Oh well, the season is rolling, so there is another run next weekend. I'd rather be prepared for that 2 day run rather than mess one up this weekend. One thing I have had driven home about Moon, there really is no 'sneaking' in any runs on him. He either has to be prepared (and it's still a bit sketchy then) or not go. He's been running too long and is too opinionated to sneak anything by him anymore.

As for that sorrel horse's knee... 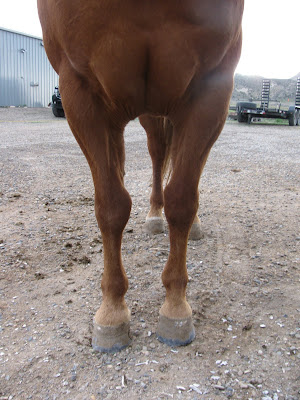 There really hasn't been any change.

The difference is so subtle it's difficult to see... 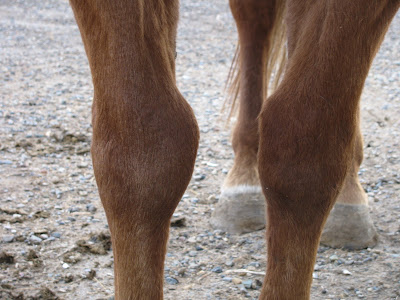 There is just the tiniest bit of puffiness above his right knee around his 'knob' and on the bottom center of his knee. (It's the knee on the left in the picture)

There is no heat, no soreness, his flexion is good and he travels sound. I guess I will just keep an eye on it and see what develops. It hasn't done anything different in a week. Meg kept him up for me while we were gone to keep an eye on it, just in case it was a strain and got bigger. It didn't, so I am not overly worried about it anymore. 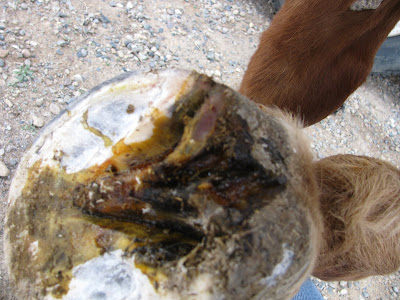 See that nasty purple bruise on his frog? (top of picture) You can't really see that he has a matching purple bruise on that heel as well. One of the worst bruises I have ever seen. I suspect this may have made him walk a little funny and added some strain on that knee. Not to mention I keep having to fight thrush on this horse. He grows a lot of heel and has really deep clefts. I have finally gotten his front feet whittled down and have started working on his back feet again.

He is not good about having his feet worked on. He gets better as I keep working with him, but he is truly genetically inclined to be snorty about anything around his feet. His mother was that way, as are his 2 sisters (out of the same mare). I don't care what people say...You just cannot get around some genetic propensities. It's not all bad though. This line of horses (through the dam's side) have a lot of what calf-roper's call 'get back'. It makes them fantastic for that event, which is what Bugs was bred to be. He was supposed to be my brother's next calf horse. Bugs' dam was a great calf-horse as is one of his sisters. The other sister is scheduled to be bred this year. Now that baby...I am looking forward to!

I had initially thought that I would turn Bugs into a barrel horse. He is a 1/2 brother to Moon (same sire) and he has a fair amount of run. However, the more I am around him, the more I realize he just needs me to get him riding well and then find him a good roper to take him to his true calling. He needs someone to turn him into what he was bred to be and I can't do that.

I don't really think his age (11yrs old) is much of a determent to him, if he is riding well. A good calf horse usually lasts well into their teens and more than a few are competitive into their early 20's. Good calf-horse prospects are not a dime a dozen. No one really breeds for that specifically. So when something comes around that has what it takes, ropers usually take notice. Bugs definitely has every attribute-good burst of speed, big stopper in the hindquarter, not to big and he has that little bit of snort.

Now I just need to get well and get rolling on him. ;-)

That ain't a happenin' to day folks. I'm headed back to bed.

I hope everyone has a wonderful Easter weekend!!!
Posted by BrownEyed Cowgirl at 11:05 AM

Awww girl, I feel for you. It sucks to be sick!! Keep feeding that cold though, that always works for me :)
I see what you mean in the knee. And that bruise, what a doozy. I agree, get him going and then let someone else take him the rest of the way. Some horses are just born to do certain things...
Get better quick!

Get to feeling better. OT - don't handle your squirrel too much while you are sick; they can get the same symptoms. We lost our squirrel due to a bout of flu after we moved to the lodge; he picked it up from the guests.

I just got back from another ride - a two-miler, which doesn't sound like much, but on new bionic hips, it was a great second time out. Good luck with the horses.
Juanita

You poor thing! I personally prefer "whine at the cold til it goes away" but I'm not sure that actually reduces the duration. ;) If you've got a Whole Foods type place nearby, try some Emergen-C - it's really tasty and has lots of vitamins and stuff.

That's a horrible bruise on the poor sorrel!

Take care of yourself! Spring bugs are nasty buggers.

I have to fight Mocha's feet all the time with thrush. Going barefoot seems to have solved some of that (she gets it under her shoes, of all places), but I have to be on top of things with Durasole applications constantly. Without shoes it'll pop up more in the back quarters than the toes.

With her bloodlines, the reiner/cutter thing is really what she's set up to do. Though she doesn't seem to mind pullin' some Gs around a can...set one up and that's what she drifts off to do on her own if I don't watch it. She also likes pulling some Gs on sharp turns after hopping over a little crosspole, either....

I like your reasoning about not sneaking in runs on Moon, either. Makes sense to me.

When I get a cold like that I cuddle up on the couch with a blanket and the remote control and hibernate for a day or two. Hope you're back to normal quickly.

Feed the cold Hot toddy's till ya feel better!

Gettin better yet? ;) (We were at about the same place in our illness the other day... if it helps any, I was able to get a whole day of sh!t taken care of yesterday AND stayed up late. You're on the tail end!!! Hang tough!!)

I can see what you were saying about the knee too. Bet yer right- torque from moving away from the bruise most likely culprit. Hope he moves out better soon!!

Hope you're feeling better soon! Sucks that you missed the race, but there will be others.