I'm not going to lie...Absurd heat is exhausting. The running joke of, 'But it's a dry heat'...stops being amusing at about 105*.

But in the grand scheme of things...It has been 102-106* in Colorado and I can tell you from experience...That is every bit as uncomfortable there, as 115* is in The Valley, so I cannot say that I wished I was back there either. The ponies probably miss the grass pastures, but I am not missing having to bust my ass in that heat to keep those pastures green.

The heat does have it's advantages though and I am capitalizing on them. There is almost no sassiness left in my horses. That never really happened, even in above normal temps in CO.

I have spent a lot of time over the last 3 years trying to make friends with Frenchie. To be sure, she HAS gotten better over time. I know she likes me because this last year or so she has taken to hanging close to me. Juuusstttt out of reach though, and every time I took a step to pet her, her reaction was always to leave. (sigh). Even in a pen, she just couldn't help but take at least one step away from me. She did get to where she kinda liked being groomed, tolerated a bath and appreciated her fly mask being put on...but always, she just had to try to leave before submitting to any contact.

It always made me a little sad. Frenchie is so much like her grandmother that she has a very special place in my heart and I kinda just want to hug and pet on her a lot more than she lets me.

Well...A few days of miserable heat and all of Frenchie's resolve to keep that distance between us has melted... 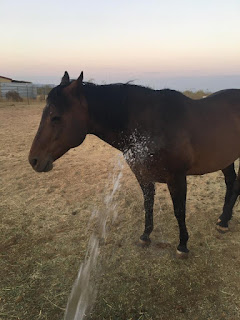 I only had to catch her the first day and spend some time hosing and scraping her down and all of the sudden I have a pocket pony.

Baths are no longer to be tolerated...They are enjoyed!!

She even let me scrub her tail up...which is something that I have hesitated to do until now. Frenchie is not afraid to kick!! She has narrowly missed me several times. I think the misses were intentional...but still not a good feeling ya know?

Breaking the barrier with Frenchie hasn't been my only win though.

I have been using bath times to further my colts training as well.

Flashy and Ruger are used to me leaning over them, but I have been taking it a few steps farther and laying my weight across their backs and they are just hunky dory with it. Saddling these two and getting them going under saddle is going to be a breeze.

The Golden Boy is more flighty than Ruger or Flashy...it's an age thing...so I still have to catch him to hose him down, but he is also getting the touched all over treatment and leaned on and his sides squeezed. He's better about it all when the other horses are not hovering nearby and causing him concern. He's the low man on the totem pole you know. As long as no one is beating him up...which they aren't...they just like to push him around a little, I don't mind the big boys keeping him in his place. He is not acting study at all because of this, which is a relief. The longer I can keep him from thinking he's 'a MAN', the better it is for all of us.

Belle is also getting the water treatment and I actually laid over her the other day and put my full weight on her and she was fine. That is a huge improvement because she was turning into a little wasp and I was kind of hating on myself for letting her get to be this old and not having her broke. All indications were pointing toward her being a handful to get going under saddle, but not so much anymore. If I can just get her going under saddle before the weather cools off, she shouldn't be as bad as I anticipated. Separating her from Moon was a good move, but also none of the mares are cycling anymore, which really helps too. See heat does have it's advantages. ;-). LOL
Posted by BrownEyed Cowgirl at 2:18 PM

Always a silver lining!
Did Fenchie get bred this year? I can't remember- only that Sassy came up open.

Yes, Frenchie is in foal to Firewater Fooler. Looks like I am back to only one foal a year again. :-/.

Sassy was re-bred. She took, but absorbed again, even with the progesterone shot. I don't know what I'm going to do with her now. I may try live covering her back to FF (next Feb), but if that doesn't work, she's done. I'm buying Cindy's breeding to Starlights Starbrite and will breed a different mare to him next year, probably Belle.