If you remember, last year's breeding season did not go at all like I had planned. Frenchie never even got to the stallion I was going to breed her to. Which was extremely frustrating and put me in a foul mood most of the summer. It took awhile to catch the gray TW mare before she ovulated. Not only was she quick to ovulate, she was doing it every 2 weeks. She did take, but absorbed the embryo. It was pretty dang heartbreaking to find out she was open. Even more heartbreaking was the fact that Letta Hank Do It passed away last Fall...and there is no frozen semen. I have been mourning the loss of the entire possibility of that dream foal for a couple months. I intentionally left Beretta and Scamper (the brown Tiny Watch mare) open. I was planning on taking Scamper to a new stud one of my barrel racing friends bought, but she came into heat before the stallion got here. Come to find out, that was my one lucky break last year. I saw that stud at some barrel races last Fall and he is most definitely not the caliber of horse I thought he was. It would have been extremely awkward if I had shown up with my mare to breed to him, taken one look at him and had to say, 'I don't think so!!' and re-loaded my mare and left. But I would have. LOL.

Thankfully, Cindy D. and Amanda got things done on their end and so I am still expecting one foal the first week in May. That didn't come easy either, but it got done. I have such a good feeling about this cross. I already know how well Mags crosses on the Colonel Freckles bloodline, so there no doubt in my mind this baby is going to be just awesome. Hopefully in a pretty, yellow package. LOL. I just can't help but hope for color. I think I'm due. ;-)

This year, Frenchie WILL make it back to SD to get bred to our Oklahoma Star stud. So she's taken care of.

I did plan on breeding Beretta back to Firewater Fooler this year, but my main focus is on getting the 2 Tiny Watch mares bred and that is probably where my money will go. Beretta is young and leaving her open for another year doesn't bother me.

Sassy will have her Firewater Fooler baby and as a rule, I generally leave my maiden mares open after their first foal, but this year, Sassy will most likely get rebred to a local stallion. It's none other than Little John's sire, Starlight Starbright. Someone wants that specific cross, so that foal, if we go ahead with the plan, already has a permanent home. :-D.

Since the death of Letta Hank Do It, I haven't really been able to decide who I wanted to breed Miss (the gray Tiny Watch mare) too. LHDI's owners have given me the option to breed any mare I want to any stallion they stand. Unfortunately, as awesome as their remaining QH stallion is...He just doesn't trip my trigger. I sure don't see myself breeding the gray mare to him. If I only ever get one foal out of that mare, I want it to be by a stallion that excites me. Speaking of getting a foal out of the gray mare...I was having a conversation with a breeder and she explained a few things for me. It's more than likely, the reason the gray mare absorbed was because of a low progesterone level. After that conversation, I drove straight to my vets and asked him point blank why he did not run blood tests on that mare last year and check her progesterone level. He looked a little sheepish and gave me an honest answer...He doesn't know why he didn't. Especially considering he knew she was older and her health was a bit fragile. Well, I decided that if I there was any possibility of getting a foal out of that mare, I need to take her to a breeder that will take the time to make sure everything is right on this mare. A low progesterone level is easily remedied by a weekly shot for the first 120 days of pregnancy. It's a leading cause of why older, and sometimes even young, mares absorb the embryos. I did not know any of this until the breeder explained it all to me. I think this person can not only get my gray mare in foal, she can get her to maintain it, so for lack of a better plan, the gray TW mare is be going to Starlight Starbright. :-)

It may not be the dream cross I envisioned like the Letta Hank Do It baby was, but it is a cross that makes sense and I know it will produce a super nice foal. I adore my Little John and he is not an exception, he is the rule of what the Starlight Starbrights are. They are super nice horses and SS has proven that when crossed on a mare that has even a little run, the babies can run. I know I won't be disappointed with the baby, if we can just get one on the ground. If we cannot get the gray mare to carry a foal this year, then it's probably time to forget about it and cut my losses. She was a risk I was willing to take, but I don't think I will try to do embryo transfer or anything on her.

So basically, that just leaves the brown TW mare, Scamper. Scamper was the mare I originally tried to buy when I found these Tiny Watch mares and now I have her. She is younger than the gray mare and healthier. I don't believe I will have any problems getting several foals out of her over the next few years. I bought her with the vision of breeding her to Frenchman's Fabulous. I still want to do that cross, but he's over my budget this year. Awhile back, I forked over a little money to help get a crippled horse into a permanent home and the breeder of that horse gave me a breeding to one of her stallions. I had seen this horse's name around and I have had some interest in breeding to him, I just didn't know when I would get to that. Well, with not taking the 'already paid for' breeding from Letta Hank Do It's owners and having to pay for a different stallion for the gray mare, I kind of just thought that I would breed the brown TW mare to the stallion I have a free breeding to.

And then I found THIS guy... 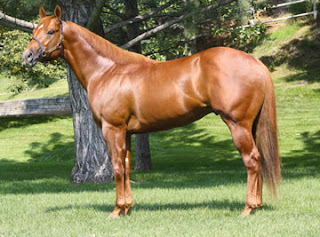 And I flat fell in l.o.v.e.!!!! I didn't think I could swing his stud fee this year, but I called the owner anyway. After talking to him and giving him the bloodlines on the brown TW mare, he cut me a deal on the stud fee and I only have to make a deposit for now and pay the rest later in the year, when the mare is actually in foal. I just couldn't say no to that kind of deal. LOL.

This sorrel stallion is named First Prize Stone. He as a 98 speed index and has already sired Grade 1 and 2 Stakes runners. He is sired by Mr. Jess Perry and out of First Prize Dash. First Prize Dash is a full sister to the barrel horse sire phenom, First Down Dash. First Prize Stone's pedigree is to die for, he's proven and he is drop-dead gorgeous. I want every baby I put on the ground to be special, but this one could be extra-special!!
Posted by BrownEyed Cowgirl at 1:15 AM

omg with that stud I'd even take a sorrel (and you know how I tend to steer clear of sorrels since we tend not to get along! lol)

I know you've mentioned your OS stud a few times, but I don't remember if you've ever told us more about him??

I guess because there hasn't been much to say about the OS stallion. LOL. He is just hanging out at the ranch. Mom hasn't even bred any mares to him the last few years. I have 3 by him; Shooter, Beretta and Belle. Beretta's injury eliminates riding. But if Ruger is any indication...She is going to be an outstanding broodmare. Shooter may have some limitations after his injury, but he will still be rideable. If it looks like running barrels is bothering that leg, I'll just go to showing him in the rail classes. I am just getting on going on Belle this year. I have a pretty good feeling about that little girl. I don't know how much all out speed she has, but she will be a turning machine. :-).

I bought Frenchie specifically to breed to the OS stallion and at some point I also want to breed the brown TW mare to him. I also think Sassy would be a phenomenal cross on him. And if Belle rides as good as I think she will, I will also breed her dam back to him again. I kind of forget about the 2 mare I still have at the ranch in SD. I won't ever breed Beretta's dam back to the OS stud. B turned into a pretty nice mare, but she is still clunkier than my ideal. Some of that may be due to the fact she was not ridden, but I think her dam would cross better on Firewater Fooler...Or a race bred stallion. Or I may never breed that mare again. Since I have Beretta, I don't really need to. One might have been enough. ;-)

So many choices. Its hard in the breeding game. I was tempted to breed my Jessie mare cause shes so nice and tries so hard I think the right cross could b good. But right now not willing to take the gamble and wait so long and spend all the money on training (cause I know I cant do it myself) and turn into a nice ranch horse lol. Maybe later when I know more will look at breeding again even though there is a real nice barrel sire just down the road Id love to have a foal by.......

I am really looking forward to seeing Sassy's foal. Do you have any photos of Starlight Starbright?

Wow! I've never heard of First Prize Stone but he is a drop dead looker!

Shirley, I don't and I didn't find any on the internet to share. I've seen him in person of course, but as an aged stallion he has gotten thick. He consistently produces get that look like LJ, big in the hip, strong in the stifle, with cute little heads. Color, size and length of neck is about the only thing that varies on his babies.