I have been wondering if my gray Tiny Watch mare settled...or not. I had her ultra-sounded at 2 weeks and there was an embryo there. I breathed a sigh of relief and have kept my fingers crossed that the embryo continued to develop.

Normally, a mare goes back in for a 60 day ultrasound to confirm pregnancy and heartbeat...

However, due to Miss's circumstances, I have gone round and round in my head whether it was worth it to do that or not. Miss lost quite a bit of weight in just the week she was at the vet's and I saw how stressful it was on her when she was being ultra-sounded. The poor old girl would just tremble and shake.

I didn't really want to stress her out like that again. I worried that if she had settled that the stress might just cause her to lose the pregnancy. And since, at this late date, there is nothing I could do about it if she was, in fact, open. Regardless of whether she is bred or not, this girl requires a little extra care, so she would be getting the same treatment. I opted to just wait and see how it played out. 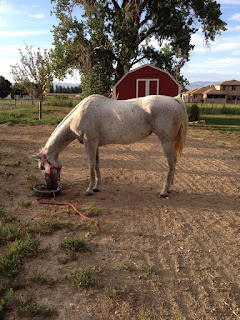 A few weeks ago, I noticed that after urinating, that Miss continued to 'wink' for an unusual amount of time. That's representative of mares during a heat cycle. However, while I watched all of the other mares go through their heat cycle, I never saw Miss act any more 'in heat' than the winking. Not that I ever saw her ever act actively 'in heat' in all of this time anyway. She's pretty darned quiet about it.

All this time, I have remained in contact with the previous owners and had at least 3 in-depth conversations with them in the last month. In one of those conversations, I discussed everything that I just talked about here.

The other night, I had Miss out for her evening grain and as usual, while she ate, I went over and started feeding the boys. The mares (and Ruger) are all in a dry lot on the west side of the house. The geldings (and Flashy) are down at the barns/pens on the east side of the house. Always, when Miss is done eating her grain, she just goes over to the hay bale by the red shed and starts eating hay. When I am done with the other chores, I come back up, open the gate and she goes back in with the mares. This particular evening, I was picking a pen and heard Flashy starting to nicker...in a VERY manly voice I might add and I look up to see Miss standing beside Flashy's pen...squatting and peeing.

Now, I know that people talk about having mares that show heat when they are in-fact bred. We sort of thought that was what Sassy was doing after her first breeding. But the most I have ever seen this mare do to show heat is lift up her tail and squeal a little and that is like, right AT ovulation. I've never seen her squat and pee before.

I was so heartsick I couldn't sleep that night. I mean...I have 2 years invested into this mare + a stud fee + semen shipping costs + the vet fees...And I am pretty darned sure that this will be the only year that Miss will be able to carry her own foal. She's getting 'fragile' and the melanomas on her tail are growing. I believe that I can keep HER comfortable for another year or two, but probably not her carrying another foal. Anything she produces in the future will more than likely have to be done by embryo transfer.

I knew she was a high risk when I bought her, so I was already thinking about these things anyway. But man...Realizing I was not going to even get a baby this time around...That hurt!!

Well, I put my sorrow out there on fb and the previous owner is sympathizing and out of the blue she CASUALLY mentions that 'Oh yea...She showed strong heat the first 2-3 months she was bred when we had her too'....

WHAT THE FRICK DID YOU JUST SAY????

I wanted to reach through the computer screen and throttle the bitch!!!

Now...I could understand, if we had not been talking all along...if I had not specifically mentioned;

I mean...If you are a breeder...And the person you sold a horse to was expressing concerns over seeing signs of heat...Wouldn't you at LEAST mention the fact that when YOU had the mare she DID show strong...actually stronger than normal...signs of being in heat, when in fact she was CONFIRMED in foal? Especially when I am expressing concerns for the mare's well-being and opting NOT to do another ultra-sound?

So I went from being heartsick to absolutely smoking fury!!!

WHY would she not have told me that?

Are people just that goddamn stupid??

Rather than blow up at her on fb, I deleted the post. I cannot even compose a private pm to tell her how upset I was that she failed to divulge that information in any one of our previous conversations. I mean...THAT is important information to have.....especially considering the circumstances. I mean, I have gone out of my way to answer their constant inquiries about 'how are the mares doing?', 'can you send pictures?', 'Oh we miss them so much'....

I do have to say, I love my vet. Bless his heart! He called me after he read my fb post and said, 'When do we need to see her?'. I explained the situation to him and we discussed holding off at this point. I may go ahead and have an ultrasound done later this Fall, when the weather cools off. The stress shouldn't bother Miss as much then and her weight will be back up to where it should be, so maybe she won't seem so fragile. Luckily, I had already talked to the stallion owners and explained my position about not wanting to do a 60 day ultrasound to them and they were fine with that. She said she has coddled many an old mare along and understood completely my desire to avoid any undo stress and she went ahead and put Miss on the stud report.

I AM relieved to learn that expressing strong signs of heat doesn't necessarily mean that Miss is open. She could still be carrying 'Tiny' and I have my fingers crossed that she is. I just wished I had known that she has done this before. It would have saved me having a total meltdown. Ugghhh!!!


Posted by BrownEyed Cowgirl at 1:22 AM

I'm always amazed at what people neglect to share when it seems so obvious to us. I will keep my fingers crossed that she is fact pregnant.

How frustrating!
I hope that she is bred for you.

OMG! I saw your original FB post and KNOW how upset you were. I cannot fathom how someone can be so obtuse as to not even THINK of mentioning that right away.
I'd be upset enough that they didn't tell you that as a courtesy when you bought the mare, but to know that they were so dumb as to not think of it right away when you started expressing concern...