Now that I finally went to a competition again, I got the fire back in my belly and it is full bore around here.

All of the geldings back on the schedule and I even got my 3y/o filly up and am going to start working her.

The greenies haven't been ridden in awhile, so as usual, I saddle them up and then pony them for a little bit to get the fresh off. I had gotten Shooter out, gave him a bath and turned him loose in the yard to graze for awhile and thought, Well, I'll just get Little John out of the way now and then he can graze while I work Shooter. I don't like letting those two out to graze together because they get to playing and the next thing you know, they are racing across the yard and tearing it up. Bad boys!!

I headed to the arena with Frosty and LJ and before I know it...here comes Shooter at a dead run.

I ended up ponying both Shooter and LJ off of Frosty... 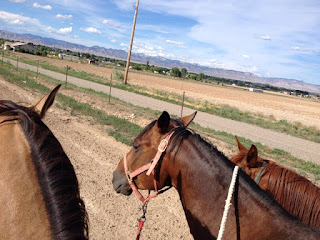 Let me tell you...These three are like The Three Stooges. LJ bites Shooter and Shooter bites Frosty and Frosty spooks and takes off trotting. Shooter isn't about to be outdone in a trotting 'race' so he tries to trot faster than Frosty and pretty quick LJ is having to lope to keep up with the two big boys. It's seriously entertaining. LOL

Frosty is trying so hard to be a good boy. He is having some IR issues right now...Tender feet, sore muscles and tendons and he would really, really like to just loose his shit and blow up...But he hasn't. I have put him on Remission again and hopefully in a few days, he will start loosening up. Just the supplements don't do much for him. He has to be rode every.single.day, until his system starts working properly again. He's also wearing a Back On Track sheet and boots on his hind legs for 4 hours every morning. I won't use the front boots on him until he stops being tender in the front feet again. After getting rode, which must involve working him hard enough to make him break a good sweat, he gets hosed off until all of the heat has left, then wiped down with diluted Absorbine and his legs are rubbed with Bigeloil. Ooohhh the joys of having an IR horse. :-/. Once Frosty comes out of the IR symptoms, he's pretty much like a normal horse. He's just not a horse that can be left sit for an extended period. I knew this was probably going to be the case when I started bringing him back and I feel bad for letting him get all soft and problematic again, but this year is just flying by and I have had a very full plate. I do expect that Frosty will be ready to make his first run of the year at the end of this month. At least, that is what I am shooting for. At the most, it usually only takes a week to get him functioning decently again and then he starts getting stronger again.

You know, these dang BOT products have been a lifesaver. I think about the hours and hours of time and effort I trying to get soreness out of this bunch of rent-a-wrecks I have...with minimal success I might add!!...And now...I just throw a sheet and/or some boots on for a few hours and Ta-Da!!

For the longest time, NOTHING worked to get the swelling out of Shooter's leg, but once whatever was going on in there started to get better, which apparently nothing but TIME could fix...Now the BOT boots work amazingly well. I put that boot on his injured leg for 4-6 hours and there is a significant improvement. The leg sweats, the swelling comes down and you can see the tendons throbbing. At first I thought the throbbing tendons was a bad thing, but I asked my vet and he said that is exactly what you want to see. I've started using the boots on all of his legs on a regular basis and Shooter continues to improve. It may take as long as another full year for all of the swelling to fully dissipate from that leg, but it is functioning normally and it bothers him less and less. I just keep thinking, there is hope for my big, beautiful boy after all. I mean, it's not like he is going anywhere anyway. :-D. 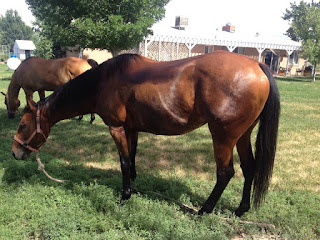 He gets the BOT sheet, hock boots and all 4 leg boots for 2-4 hours, not every day, but regularly. God, he hates those boots. LOL. He will stand in one spot forever just so he doesn't have to try to move with them on and when he finally does move, he steps VERY high and VERY carefully. Right now, Jet's biggest struggle is picking up his right lead (when being ridden). We spend the majority of our time working on that....and some on the barrel pattern.

Moon is getting a little work on the pattern as well. I know he can run the left-hand pattern and isn't confused by the change in direction...but the change in direction is showing me some of Moon's weaknesses. I was hoping for that to happen. He wants to get a bit 'leany' going into the 1st barrel, something he also did when going to the right...So we work on traveling upright to the barrel and then just lope circles around it until he is relaxed and stays upright. Going into the 2nd barrel, now that we are going the other direction, I can actually feel how short Moon gets. 'Short' as in shortens his stride, slows his feet and wants to stop moving f.o.r.w.a.r.d.. So we have been working on that. When I feel him start to get short on me, I just hustle him straight forward...right on past the barrel...make a circle and come back around about 1/2 way between the 1st and 2nd barrel and start our approach again. I realize that I need to be using my legs more during a run, to keep him moving, but the whole point of practice is to get Moon freed up again. If I have to kick, kick, kick when we are just trotting or slow loping a practice run...I'll never be able to kick hard enough to keep him moving during a real run.

And then there is my little red fireball... 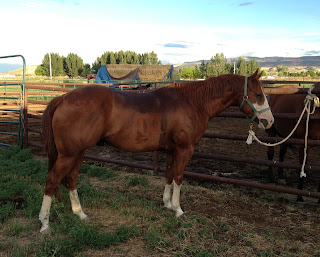 LJ is such a fun, little horse. I just adore him. He is quick footed, quick minded and the faster he goes, the better he handles. :-D. I have had to up the speed on the pattern a little with him because keeping LJ's attention at slow speeds is a little difficult. He's a little ADD. LOL. He's a ways away from being ready to compete on, but LJ is not a horse you can just poke around on forever. He gets bored and starts looking for trouble. So we do a couple slower patterns, then pump up the speed, then I make sure to 'shut him off' before we leave the pattern. The first day we stood at the 3rd barrel for 3-4 minutes before he took a breath and let it go. With a horse like this...It's vitally important to make sure they are 'shut off' before quitting the pattern. LJ is no dead-head. It's actually really good for me to have a horse like LJ because it forces me to push a little more than I normally do and I find that I am asking my other horses for a little more during their practice sessions as well. There is such a thing as taking too long to train one and I think because Frosty took so dang long to get the hang of it, I just started treating my other horses that way too. LJ is the polar opposite of Frosty and would go batshit crazy if I continued to try to train him as slowly as I had to with Frosty.

It's a very diverse group of horses I have and each one is super cool in their own way. I am often asked which one is my favorite and the truth is...I don't have a favorite. I am pretty equally fond of each of them. I try to start my day with the horse I enjoyed the most or had the best day on from the previous day and surprisingly...It's almost never the same horse. One morning I cannot wait to get my saddle this one or that one, but by the next day, it's a different one.

I'm anxious to get my 3y/o filly into the mix. I think her and LJ are going to be a lot a like. There is just something about small horses that brings out the kid in me. It's almost like having ponies again. :-)
Posted by BrownEyed Cowgirl at 11:38 PM

5 geldings and starting on my 3y/o filly. I want to try to get Frenchie worked in too, but I need to schedule a trip to Gunnison to have the chiro (the one that helped The Big Bay so much) give her an all over body fix.