It was a wild and whoolly weekend in Las Vegas...but we survived!! Barely!! LOL.

As much as I need to get away sometimes...I am always so happy to get home.

I haven't been very good about posting Ruger...Or Flashy...pics here lately. Ruger is hard to photograph. He has no desire to keep his distance from me. I swear, he is more like a puppy dog than a colt. These are about as good as I could get and if you will notice, he's always seems to be stepping toward me. There is no escaping him. LOL. 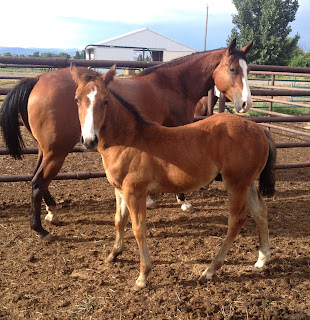 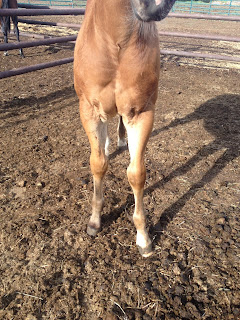 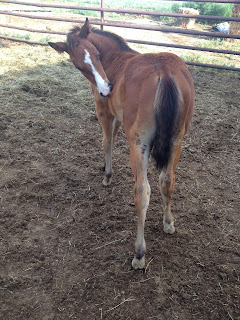 Ruger is not as enamored of going to the big pen as he used to be. He doesn't think it's much fun to be away from his buddy, Flashy. LOL. 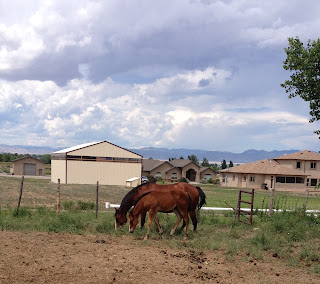 (Came home from Vegas to some wonderfully cool and moist weather!! We needed a break from the heat!!) 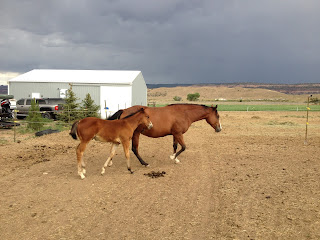 As you can see, Ruger is a pretty good sized colt for only being just a little over 3 months old. I measured him and he is already 11.2HH. Beretta is a good milker!! LOL. Although, I will say, Mags does seem to be producing big, well-developed foals. At least the ones I have seen pictures of have been. Ruger's front legs straightened out and he is totally strong in both of them now, so these two will probably just stay in the dry lot from now until I wean. Which will probably be right at 4 months...IF that long. Ruger just isn't that into his mom anymore. I hardly ever see him nurse. He eats almost as much hay as she does and gobbles up his grain. What he really wants is to be allowed to be in the same pen with Flashy so they can play for realz!! As far as Ruger and Flashy are concerned, they are exactly the same age...and boys want to be boys. Hehehe

I have been hesitant to post any photos of Flashy because he just isn't 'blossoming' like my yearlings usually do. He seems so small compared to how I am used to my yearlings looking, but that is probably due to a combination of factors... 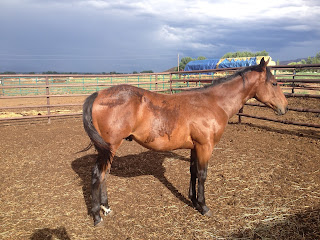 I have been told that being a premie could mean that Flashy may be as much as a year behind in development. It didn't help that he didn't winter well, but he was 13 months before his testicles dropped, whereas all of my other colts were dropped by 8-10 months and gelded by the time they were a year. Flashy didn't drop until the middle of June and even when Beretta came into heat in the pen next to him, he had no interest in her. He acted like a submissive weanling toward her. Not being gelded yet is probably slowing his development as well. By the time Flashy dropped, it was already hotter than hades here and the bugs were out. Not an especially good time to castrate, although, if he had been acting studly I would have risked it and gotten him taken care of. Now we will wait until Fall, which ended up working out for the best anyway. Ruger has a 2-finger hernia that I will have the vet fix then too, and if he can castrate Ruger at the same time...That would be GREAT!!

Posted by BrownEyed Cowgirl at 12:56 AM

Ruger is a tank! He is going to be a big strong boy when he's all grown up. Don't worry about Flashy, he'll catch up. The yearling year is the worst, they always look awful until they are a late 2 yr old.

Well, Shirley said just about everything I was going to. Ruger is huge and such a beefcake!

Flashy does look somewhat awkward, but all his bits are really good, he just needs to grow. Love that booty, though.

Flashy reminds me A LOT of his Uncle Moon. Little slow to develop, not especially attractive to the eye, but yet when you try to pick him apart...You really can't. Flashy does have a stronger stifle and better hock-set than Moon does, which I am pleased with, but really...It's almost like jumping back in time. LOL. I got my 'do-over'. ;-)

Its so hard to judge yearlings, some looks so big and nice and grown up but others take longer. My Bailey was about 4 before she quit looking like a baby. And wow Ruger. Will be fun to see him and Flash play together :)