It's still non-stop busy-ness around here, but I finally feel like I am caught up...Or at least I did.

Miss, the gray mare has been bred and is ready to come home. I'll spend the next couple of weeks with my fingers crossed that she took. There shouldn't be a reason she didn't....But considering how my luck has been going with the mare situation....Let's just say, I'll be praying like crazy that both mares, Miss and Sassy are settled in foal...And STAY THAT WAY!!

I gave up on trying to figure out if/when I can get Frenchie home to SD to get bred. She will just have to stay open this year. It's still uncharacteristically wet there. Actually, I think I came to terms with it before I actually decided to just let it go, because one day, I just said, 'F$%# It! No baby for you right now'.

Frenchie looks so fabulous right now, I'm actually contemplating cleaning her up and showing her in Halter. 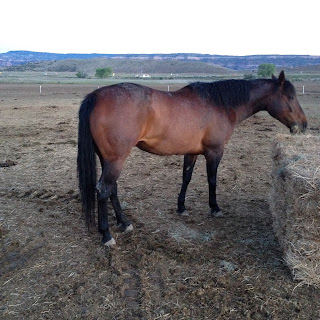 Wouldn't hurt my feelings to put a few wins under her belt, maybe even an AQHA point or two on her. I may even start her under saddle and see if I can accomplish anything with her in the next year.  She's only 12 this year. She has lots of time for more babies (knock on wood!!) and I am just weary of thinking about breeding season. LOL.

I finally got my dry lot pen divided and Ms. B and Mr. Ruger are getting some daily turn-out time... 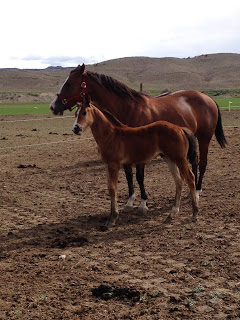 Eventually, this will be their full-time pen, but while Ruger's front legs have straightened up, he still gets a bit shaky in the knees after a couple of hours...so I put them back in their smaller pen, where Ruger is comfortable laying down and resting. It suddenly became summer around here and my spoiled little man dearly loves to go lay in the shade of his stall during the heat of the day.

See all that green behind them? That's my pasture!! Yeaaaa buddy!! It's greening up nicely. Of course, the majority of the growth on it is the oats, but the grass is coming in thickly too.

Buuuuttt....I am back to fighting prairie dogs. Uggghhhhh!! They are moving in faster than I can irrigate them out. I was just at a loss of what to do to keep them out of my field, when I happened to see an ad, at the feedstore, for someone who has a gas machine. I am incredibly over budget on this pasture projected....not to mention my own personal time invested. TWO MONTHS of EXTREMELY LIMITED HORSE TIME!! Makes BEC a VERY, UNHAPPY COWGIRL!!!

I talked to the gal who does the gassing, got a quote. Talked to MH, who, while not entirely thrilled at the prospect of spending yet MORE $$, did agree that we need to do something...And got on the calendar for some serious prairie dog elimination. 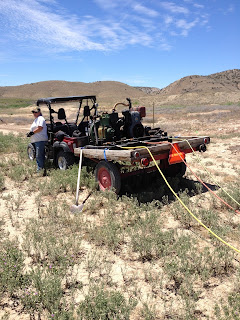 Puff is a gas-powered machine, whose carbon monoxide emissions are captured, run through a compressor, and out the hoses coming off of the back of the machine. The hose is then stuck into a prairie dog hole... 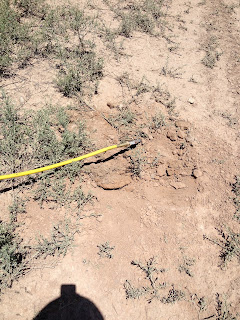 Dirt is then shoveled around to seal up the hole and Puff does his 'magic'. The hose is left in about 7 minutes for a normal sized hole, 10 minutes for a larger hole and for the gigantic holes...We didn't mess around...We shoved all three hoses in them and left them in for 10 minutes. Each hose releases about 4,500ppm of CO (carbon monoxide). It only takes 35ppm to kill a person.

I was really hoping we could accomplish a perimeter sweep in one day, because this is not an inexpensive endeavor, but even with both of us working, ALL DAY LONG, we only made it through about 1/2 of the holes I wanted to gas. So another full day of gassing dogs is in store.

The goal is to get a good kill around the perimeter of my pasture and then talk to my other 2 neighbors, who are also having prairie dog problems (from the same town) and see if they want to pitch in and have this lady come back for another 2 or 3 full days to hit the main town hard. I think we could set this dog town back on it's heels for at least a year if we followed this plan.

The sticky point is...The dog town is actually on land owned by 'absentee owners'. Personally, I have ZERO problems trespassing on those people's land and killing off 'their' prairie dog town, but I'm not sure that my neighbors want to invest into something that will ultimately benefit the absentee owners. Obviously, we all know the actual owners of the property aren't going to invest in ridding their property of the prairie dogs, or they would have already done something about it. I just despise people who refuse to be good neighbors. I live in a wonderful neighborhood. Everybody gets along, works together and helps each other out...And then we have these freaking jerks, who refuse to maintain their property. If, by chance they ever do build a house out there and move here....They are not going to get a very warm reception. Although, I rather do hope they do exactly that...and fairly soon...because then THEIR prairie dog problem will really become THEIR problem...Not MINE!! (evil grin)

Needless to say...Right about the time I got the geldings cleaned up...manes and tails washed and feet trimmed...and started to get everyone worked into a riding schedule...I got busy with this prairie dog business. Luckily, it was only for a couple of days and after that is taken care of...It's back to working horses. :-).

While I was building my last dry lot pen, MH was good enough to work my arena up again... 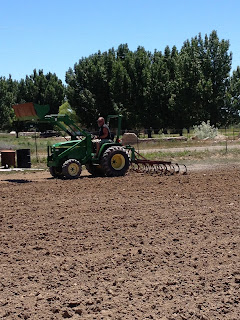 Of course, every time we work the ground...I have to take the skidsteer out and pick a bucket of rocks. Prairie dogs and rocks!! I sure have an over abundance of those two things. LOL. but at least now, I'm mostly picking little rocks up, not boulders.

I did find a good use for quite a few of those rocks. FLOWER BEDS!! I finished the one under the cottonwood... 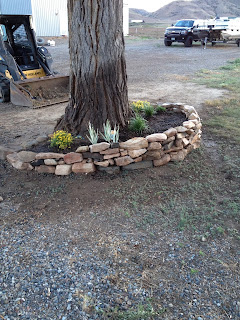 I have since, added more flowers to it. Mostly annuals until the perennials fill in. :-). I'm getting smarter about these things. ;-) 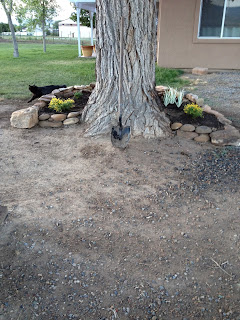 Still need to add gravel to the backside here, but we will eventually be ordering another truckload of road gravel and I'll just shovel some up here.

Then I finally got another bed finished.... 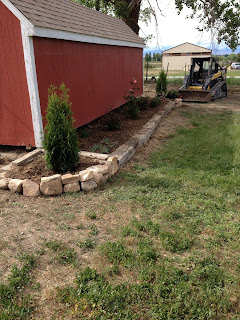 I have one more large landscaping project to do...And then I am calling it a thing on the landscaping this year. It was fun...and now I'm over it. I'll have my hands full keeping everything I did do watered up once it gets hot. Sprinkler and watering systems will be next years big ticket endeavor. ;-). That darned pasture/irrigation/prairie dog eradication project has tapped the budget and then some. But I am so, so, very thankful to have it done. I don't know how I got so lucky, but this has been the perfect year to do it. It's been much cooler than normal with a lot more moisture and that helped me out tremendously. :-)
Posted by BrownEyed Cowgirl at 12:12 AM

Oh rocks, I feel like I have picked up a million and still have a million more to go in my arena, ugh who decided to put it where the old corral used to be (me lol of course)
Looking good around there, I have lots of landscaping project I wanna get done but all is put on hold until we get the house here....if we ever get the hose here :/

Li'l Ruger is looking good! Heard the good news that Sassy caught, hope Miss did too.
I'm sure glad we don't have gophers (that's what we call 'em) here. One place we lived in Alberta had them, but I think the water table is too high for them here, we live on reclaimed lake bed. Used to be where Kootenay River flowed into Kootenay lake, but they built a dyke system and turned it into farm land.