I came home from the baby shower and there was enough daylight left, so I hurriedly saddled Mr. Frosty and we set out down the road.

In spite of lavishly spraying ourselves with mosquito repellent...Those little suckers bombarded us. I hurried the ride along a little and made a mental note...Evening riding is out for a little while longer! LOL

The next morning, I had 2 more horses going to the farrier. Jet and LJ are now sporting pretty feet and ready to go to work. Both just got front shoes. After this Jet probably won't need shoes again for awhile. He just had a little bit of twist left in that one foot. LJ sort of wants to platter out in the toe on the front and I knew if I just trimmed him back, he'd be sore.

On a happy, happy note...My farrier has so many clients that go to Arizona in the winter now that he is trying to schedule in trips down there to keep all of our horses properly shod. OMG!! Glory hallalujah!!! He said he is sick of having to fix everyone's horses after they have been shod by AZ farriers. LMAO!!! I had told him this last time when I came home that I was to the point where I was willing to fly him down once a month to shoe my horses because I was sick of having my horse's feet messed up. I guess I didn't really think that through, because I could and would fly him down...but he's kinda be without his tools, now wouldn't he? LOL

After getting home from the farrier, I saddled up Frosty and Jet, threw them in the stock trailer and drove to the desert to get some hill work in. The only problem was... 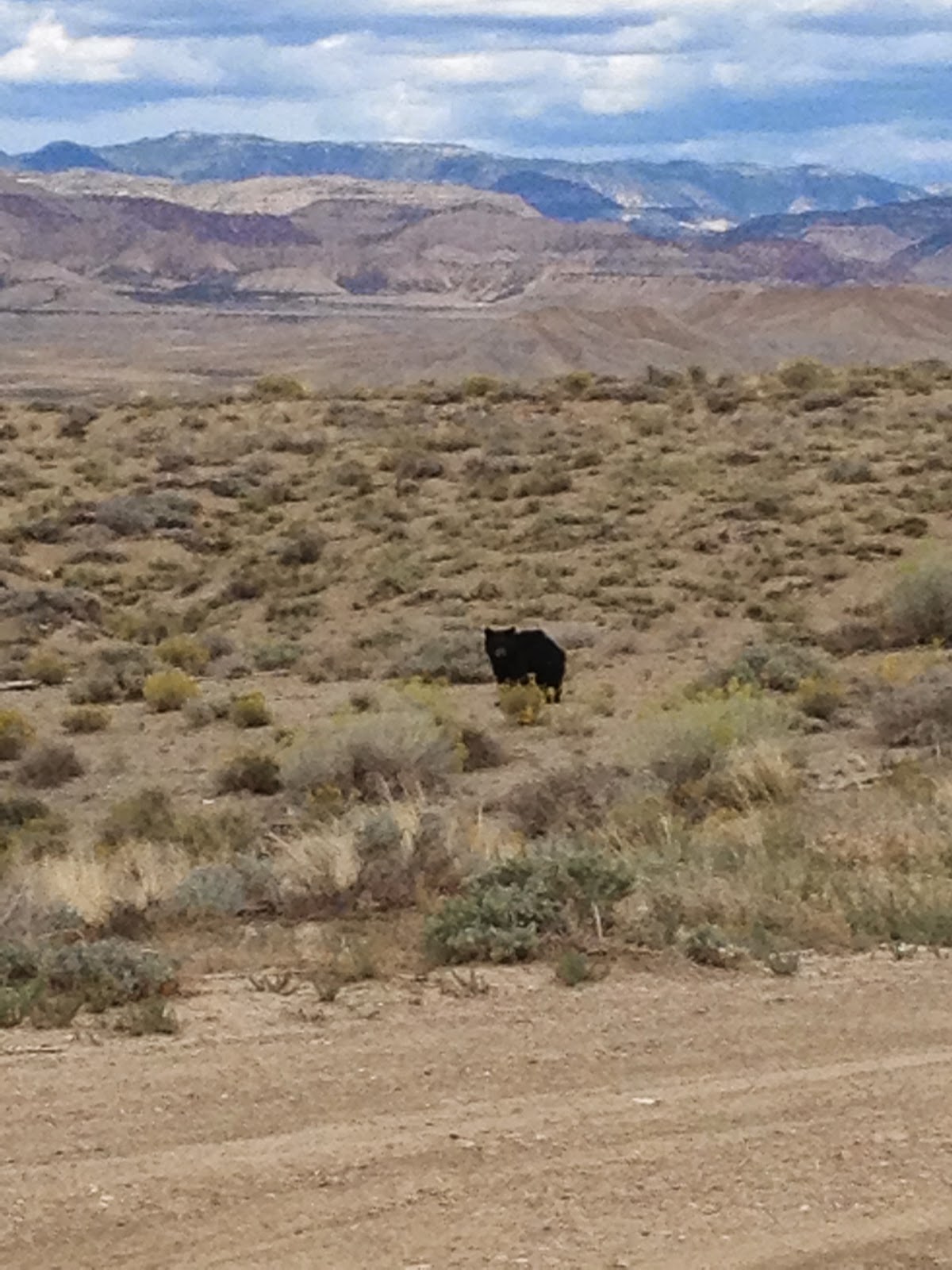 This little black bear was 'parked' in MY parking spot!

There has been a serious bear problem around the entire area this year. They are in everyone's back yards, roaming around towns and unfortunately, doing a little damage to some livestock. A couple of horses have fallen victim to bear predation and some people have lost goats and sheep.

Luckily, we have not had a problem. Partly because there are no corn fields near us and partly because of my uber, awesome watch dogs. I always have to laugh to myself when people give us a hard time about our overly friendly dogs. The nice thing about having heelers is that they DO have a reputation, so people that don't know them ARE a little hesitant about stepping out of their vehicles. I always make a big production of 'calling them off' and giving them commands (rolls eyes). Of course, neither of our dogs are worth a hoot as home protectors.

But they are VERY good at patrolling their property...and you can bet those two know exactly what their property line is. If they never do anything but keep the bears, mountain lions (Yea, there has been a couple of those spotted near our place too), coyotes and fox away...They are earning their nightly treats!

So anyway....This little guy was my first wild bear sighting.

I opted to just leave him alone and drive farther up the road to park...and then I rode the OTHER direction. LOL. I wasn't all that worried about encountering a bear on horseback. Typcially, a black bear won't bother you and I know that even Frosty can outrun one in a wide open space, if need be. I did however have my Red Dog with me and I know if I encountered one, he would try to protect me...so, no more taking dogs with me on my rides for awhile. Red Dog is going to be so bummed!!

But I am finally back in the saddle and have every intention of camping there. Frosty, Jet and LJ are ready to roll. I'll probably even start legging Moon back up, just in case I can start practice roping in the next couple of weeks. I got Shooter in and wouldn't you know...the very next morning he was limping on his previously injured leg. I got to looking at it but couldn't determine the reason he was limping until I went to straighten up and happened to notice several scrapes on his stifle. Upon closer inspection, the stifle joint is all puffy. It kinda looks like he got kicked, but that would mean that either Miss or Frenchie kicked him through the fence and neither one of them have any scrapes on their hind legs, nor have I ever seen either mare act nasty to any other horse I have put in the pen adjoining theirs. So I dunno! Darned horses...If it isn't one thing, it's another. I hope this is not becoming a trend. Shooter went 5 years without a single injury and the instant I want to put him to work, he tries to saw off a leg. Spend a year and a half getting that healed up and go to put him to work again and now this. He and I may have to have a discussion. Being on the injured reserve isn't always going to rate him 5-Star treatment. He keeps this up and he'll be living on moldy hay in the far back pen. He might want to ask Miss how much she enjoyed that for 7 years of her life. ;-)

Posted by BrownEyed Cowgirl at 11:58 PM

Yay for the ride, and I agree,black bears are not a huge worry when you are tiding in an open area, funny the horses,or at least mine dont react much at all to a bear.Maybe flick an ear and point it out.Actually had more troublewith my old mare and Moose, she wasnt afraid, she flat out HATED THEM But dogs, like Skeeter and your would deffinitely set out after it! good iede to leave'm home

Shooter watch out ! Mom is getting irritated.LOL Like you even have moldy hay on site?? sure I believe you

Yay you for getting to ride. Finally! Feels good to be back at it after not being in the saddle for a while.