On The Move Again

It's time to take Moon back to SD. I decided I might as well get Frosty and Jet up, get them back into work mode and take them with me as well. This will be a 'working' vacation for us. I told Shooter and LJ they had another couple of weeks reprieve before they had to go back to work.

Shooter had other plans... 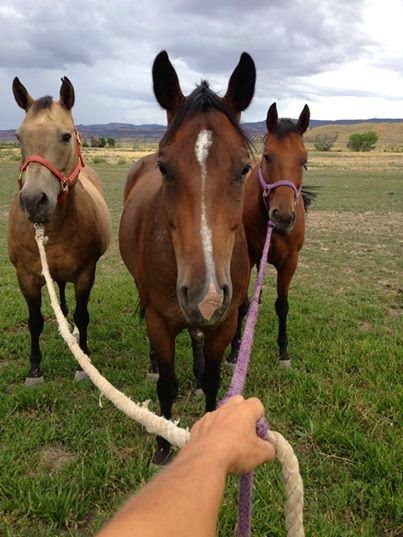 I guess he's tired of vacation. He got in the middle of these two and was coming with. He's had enough of being a pasture ornament. LOL

For Frosty, even if I wasn't getting back into the swing of riding, it was time he came off of the pasture anyway. The season is beginning to change (cooler and wetter) and what little bits of grass is left in the pasture is over-grazed. Frosty hasn't had any IR problems over the summer, but now is the time when it could rear it's ugly head again.

I had no concerns about trying to salvage the few spots of grass left in the pasture because the whole thing needs to be re-farmed and re-planted anyway. The green you see in the picture isn't even grass, it's just weeds. I'm still trying to find someone who will re-do the south 9 acres for me and time is running out. If I don't have it redone very soon, I'll have to wait until next spring. :-/.

I don't know that any of my horses really like extended time off. They like a couple weeks off, here and there, but after that, they are bored, begin to miss the attention and definitely begin to miss their grain rations.

Frosty was very happy when I stuck him in a pen after our ride and immediately began to whinny for his evening grain. One those patterns have been established...They don't let you forget it. LOL.

Jet has changed a lot this summer. I wished I could say it was some magical training...or even contribute the change in him to simple maturity...but the truth is, I think the majority of it has to do with the fact his pain issues were resolved by the stifle and hock injections.

It's taken 2 rounds of injections and almost a full year, but the front leg that was twisting has straightened out, as have his hocks.

(All week I meant to get pictures and kept forgetting...You can see in the above picture that his left front leg is straight again)

He did blow a large splint on the left front leg and I can only surmise that the reason for that (since he has been on turnout all of this time) had to do with how twisted that leg had become and then the untwisting of it left the bone weakened. I admit, it sounds strange...but then again, I have never witnessed anything like what was happening to this horse before. Legs going all screwy and then straightening back up? It's craziness I tell ya!!

Jet will get an introduction to pasture riding while in SD. I have been needing to get this horse out and cover some country with him and I just can't seem to find anyone I trust to pony him those first few rides. Personally, I think after a couple of rides out in the open, he will be fine and we can just move along with getting him broke. But if he should get a little wonky out in the open, I need someone who knows how handle it....and my brother has ponied me on many a colt, back in the day, so hopefully he still has the touch. Most of the time, it's just keeping these horses moving. Even if they want to buck. There is something to be said for the old 'cowboy' style of breaking sometimes. When we were kids, my dad (and oldest brother) used to pony me on the colts the first few rides out in the open. Most of those colts only had 2-3 round pen rides on them. Dad wasn't a big believer in 'messing around' (Hahahaha). Nope, covering miles was the goal...and it worked. If a colt wanted to be broncy, the pony rider would just snub 'em up and we'd hit a long trot. You go up and over a few of those rolling SD hills, til those colts got a little tired and they'd quit all of that non-sense.

Megan and I got some rides like that in on Jet two winters ago in AZ and that is actually how I figured out there was really something wrong with this horse. He just traveled so 'off' and he didn't get better. That is NOT how it works, so I knew something wasn't right. But now that he is fixed up physically and his brain is engaged again...We are gonna try it again and see if we can't get over this hump. I know there is a nice horse in there...Or I would NEVER have put all of this effort into him...Now, it's just time to bring it to fruition.

Hey, one thing about it...If he breaks ME, instead of the other way around, at least I am home on the reservation, where I get free healthcare. LMAO!!! (Oh, come on...You KNOW that's kinda funny!!)


Posted by BrownEyed Cowgirl at 11:48 PM

That is odd about Jet's legs.

Awwww. Shooter's just wanting to get in your good graces right from the start. What a cutey!
Bionic Cowgirl

Good luck ! sometimes going back to the tried and true is just the way to go, and the free health care sounds like a smart idea too

It worked back when, so it should still work for you now. Beats a lot of the other 'methods' out there.

My uncle used to take his horses out in the riverbed and let them run in the sandy spots. It built them up over time but the first few times- even if they got screwy and went to bucking it was a soft landing. Otherwise it wore. them. out. We learned early on, not to get behind anyone else or it was like riding in a sandblaster. Good times.