Boy, I sure am having a hard time getting or staying into the swing of the 'horse thing' this summer....Well, at least the riding aspect.

The property is requiring a lot of attention and it is taking up most of my time and energy.

The first couple of years, we all busted butt just to get this property cleaned up and just get it to the point where we had ideas of what we wanted to do.

The next couple of years, I got busy rodeoing and only did the bare minimum in maintenance.

This year...With Moon out of competition and having spent all winter riding, I have pretty much decided that this summer is the summer we get this place finished up.

Right off the bat, I had to go in and replace 200 feet of buried irrigation line... 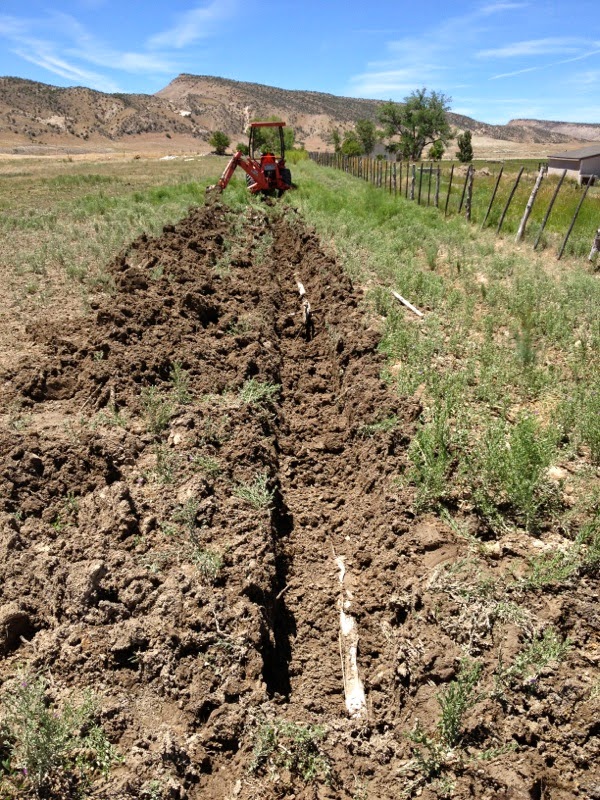 There was a couple of obvious leaks after turning on the headgate, but once I started digging I realized that there was more damage than I anticipated, so I rented a backhoe and started digging. I guess that would explain why I didn't have any water pressure at the house last year. :-/

The biggest problem though, was/is the fact that the prairie dogs moved in, in full force, last winter and absolutely wrecked the pasture. I guess with no horses and no activity around here, they decided to take advantage.

It took a little doing...3 shooters, over a few weeks and we have managed to disperse of the majority of them. The tally is close to 200. Good lord!!

Once we got the numbers down and I got the waterline fixed, I was able to turn my main headgate back on and flood the pasture. Hopefully drowning a few more, but definitely driving them out of their homes at least temporarily. After that, I ran around with the bobcat and a shovel, filling in holes and leveling mounds. Not only does that make the pasture safer for my horses, but now I can go back and locate any 'live holes' and gas bomb them.

We still have to contend with the main town, which is on the vacant property next door. The asshole, absentee owners won't do anything about the prairie dogs on their property, but they spent the money fencing off the property and posting 'No Trespassing' signs. We respected that for a couple of years, but no more. They can shove those 'No Trespassing' signs where the sun doesn't shine. All three surrounding properties have had to deal with the increase in the prairie dog numbers and we are done. Time to put a severe hurting on the main population. If the absentee owner is LUCKY, we won't send him a bill for the damages his negligence has caused everyone.

Which for us means, I pretty much have to feed hay all summer now. And the entire pasture has to be plowed under and replanted. It's too late in the season to do that now, but this fall, I'll have the south half redone, leaving a 5 acre parcel for the horses for the winter. Next spring, we'll tear up that 5 acre parcel and have it replanted.

MH has worked his usual magic though and made my life a whole lot easier. This little beauty showed up last week... 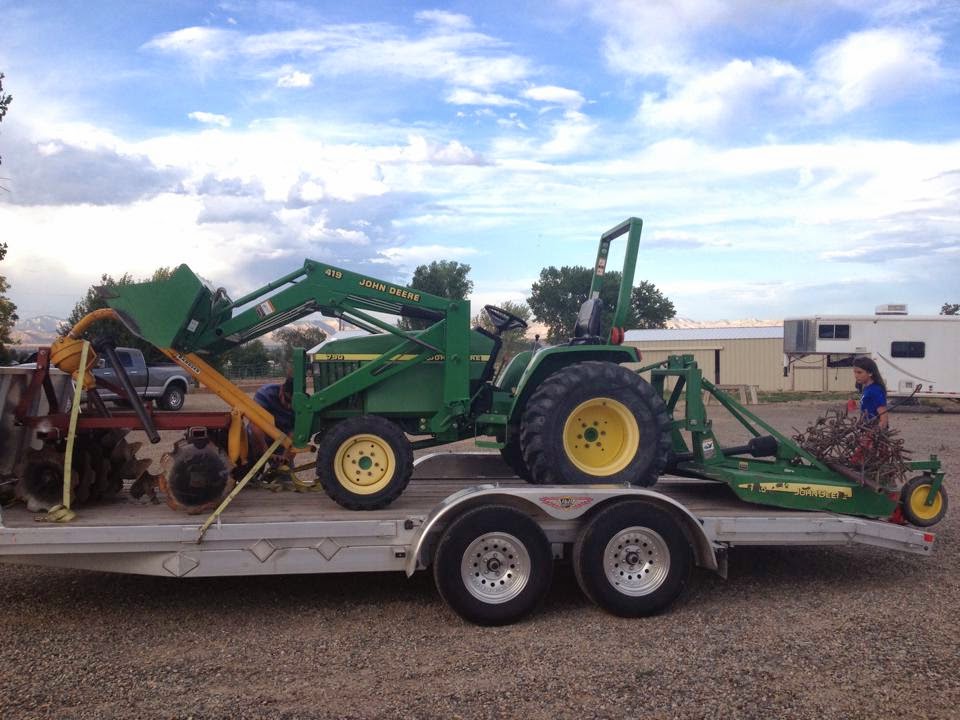 It went right to work the next day. MH mowed down weeds at our place and then went right to the neighbor's and mowed his pasture. Right after that, I had him hook up the disk for me and I set to work disking my arena. The disk isn't enough to get in and work the ground as deep as I need it, but it's a start. I'll keep working on it and see if I can't rent an arena ripper from one of my friends for an afternoon. Will probably need a shot of rain to soften up the hardpan before that happens though.

Now I just need to go buy some gate posts and gates and we will be able to put the post hole digger to use and get gates in where I have been wanting to put them. That means I can finally segregate the pastures the way I have been wanting too and put in a couple of small shades. People keep asking me if I am going to build a bigger barn here and to be perfectly honest...I'm not all that interested in a fancy barn. When it's done, I'll have 5 nice sized pens with shelter and 2 large enclosed stalls, 2-3 acre pastures with shade/shelter and a 9 acre hay/winter pasture, with a windblock. That is about as fancy as I care to go. Anything more than that is just too much work and takes away from the time I have to work with horses.

As far as the house, we are down to the last few little details. The roof is getting reshingled this year and we are putting in automatic sprinkler systems for the yards and landscaping. I have been working on finishing up the flowerbeds I want, so that when the watering system is put in, they know what needs to be laid and boy, oh boy...will that alleviate a lot of work for me. I had to stop adding landscaping because keeping up with hand-watering everything was taking up a tremendous amount of time.

Hopefully, all of this stuff will be completed by the time the weather gets nice again in September. LOL. I'll be ready to get focused back on the horses by then for sure. Just in time to have everyone ready to go when it's time to head back to Arizona for the winter run. :-)

Posted by BrownEyed Cowgirl at 12:19 PM

Good Lord, I don't know how you keep up with yourself!

Property maintenance is sure a pain, seems like always fences and water, although we don't irrigate which saves us that hassle.
Your place sounds like fancy, I have 3 pastures, a winter one a summer one and another I can use if no grass (or too many horses, lol) And cow corrals I can use in summer time.
New toys are fun for a while but then its just work again.
I can see how the absentee owner place would be a nuisance I am glad we have good neighbors (who are not too close)

Some times it sure does feel like I am running in circles GD. A little here and a little there but nothing looks like it is getting done. But when it all comes together...it's a big deal.

I thought having irrigation would be awesome Crystal...Maybe it will be when we finally get it all put back together like it is supposed to be, but it's been a mess since we bought the place and I just got by with it the way it was. Maybe that wasn't such a good plan after all because it sure seems like it's a lot of work now. LOL

My dad always added weights on his disk to add extra weight to disk in deeper. That is a nice gift from your honey, I think he is a keeper, one of the good ones.

Nice toy!
One summer fixing the place up the way you want it is worth it in the long run.

It may take a lot of work to get things brought around to where you want them, but once that's done, the upkeep isn't quite so bad. Like the new toy. That certainly makes life easier.

Am totally jealous of the new toy and all the attachments! The previous owners of our house offered us to buy their JD + attachements for a wicked price when we bought the house, but just couldn't swing the extra $$. I totally regret not trying harder to make it work.

An older farmer friend has come in a couple of times to do some big stuff for me, all for a case of beer, so I've been lucky.

Keeping up with mowing/weeding, etc. is a chore, for sure. Luckily I don't have the prairie dog woes that you have - sounds like a ton of work to get the little rotters out of your pastures!

TC throws a couple of semi tractor brake drums on top of any implement we need to dig deeper. Makes all the difference in the world.

Thanks for the reminders to put some weight on the disk. That will help for sure.

I feel your pain, I feel like spring work cleaning and set up for summer takes darn near till fall!