The little man is doing fantastic!!

By last night he had everything figured out and was completely on his own. He's starting to want to throw in a few little bucks to his movements as well. LOL.

I was actually able to get 4 whole hours of sleep as well. Yay me!! I still feel rum-dumb and my whole body aches...But it was Soooooo Worth It!! 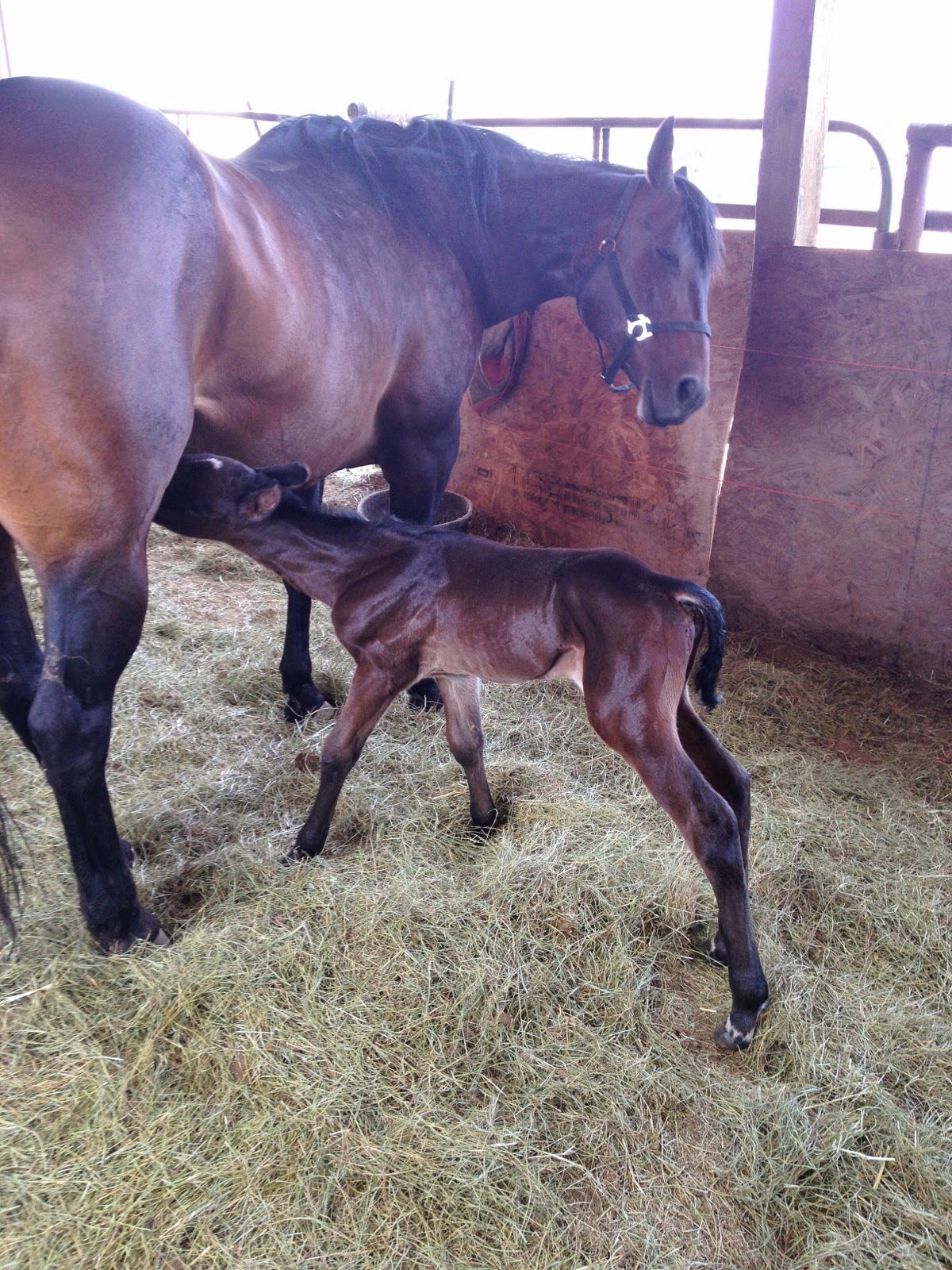 I am still waiting for the last blood draw results. Fingers crossed that his IgG levels (Immunoglobulin) are at least 600. The ideal is 800-1,000, but the vet said if they have come up to to at least 400-600, we can still hold off on doing a transfusion for another couple of days, retest and see what the blood says then. If they levels have not come up adequately by the time he is a week old...A transfusion will still be necessary. Without it, all it takes is any little germ/virus to make his system crash and he could go downhill and die fairly rapidly, no matter how good he looks now nor how much he has progressed from where he was. I am waiting with baited breath and crossed fingers that the first test was so low because little Flash was just slow to get started.

Now that I know he is nursing adequately on his own, I am leaving him and momma alone longer between checks. I know it seems somewhat romantic that Flash looks at me as an additional 'momma'...but it's NOT! This is not the kind of 'bond' that I want with this little guy. My whole goal has been merely to get him to the point where his real momma can do her job.

I do like to imprint my foals, if at all possible...but it's not a big deal whether I can or not because I have found absolutely NO difference in my mature horses. Besides, the level of contact I have had to have with Flash goes far beyond normal imprinting. I have been around and handled a few horses that had far too much human contact as foals and I disliked those horses very much. For the most part, they are ill-mannered and disrespectful of humans and it is difficult to re-establish proper boundaries.

There has been a sort of a bond established between Frenchy and I that I am pleased with. Maybe the proper wording should be a 'mutual respect' was established. I am the ONLY one Frenchy has accepted into her and her baby's space with minimal protest. During the first 36 hours, Frenchy was perfectly willing to let me do what I needed to do...Milk her and handle her baby, but as Flash has gotten stronger, Frenchy has become a little more protective of him. And that is a GOOD THING!! As long as Flash is doing good, I am only more than happy to turn the responsibility of his raising back over to his real mother. She gets him for a few months. I'll get him for the rest of his life. :-) 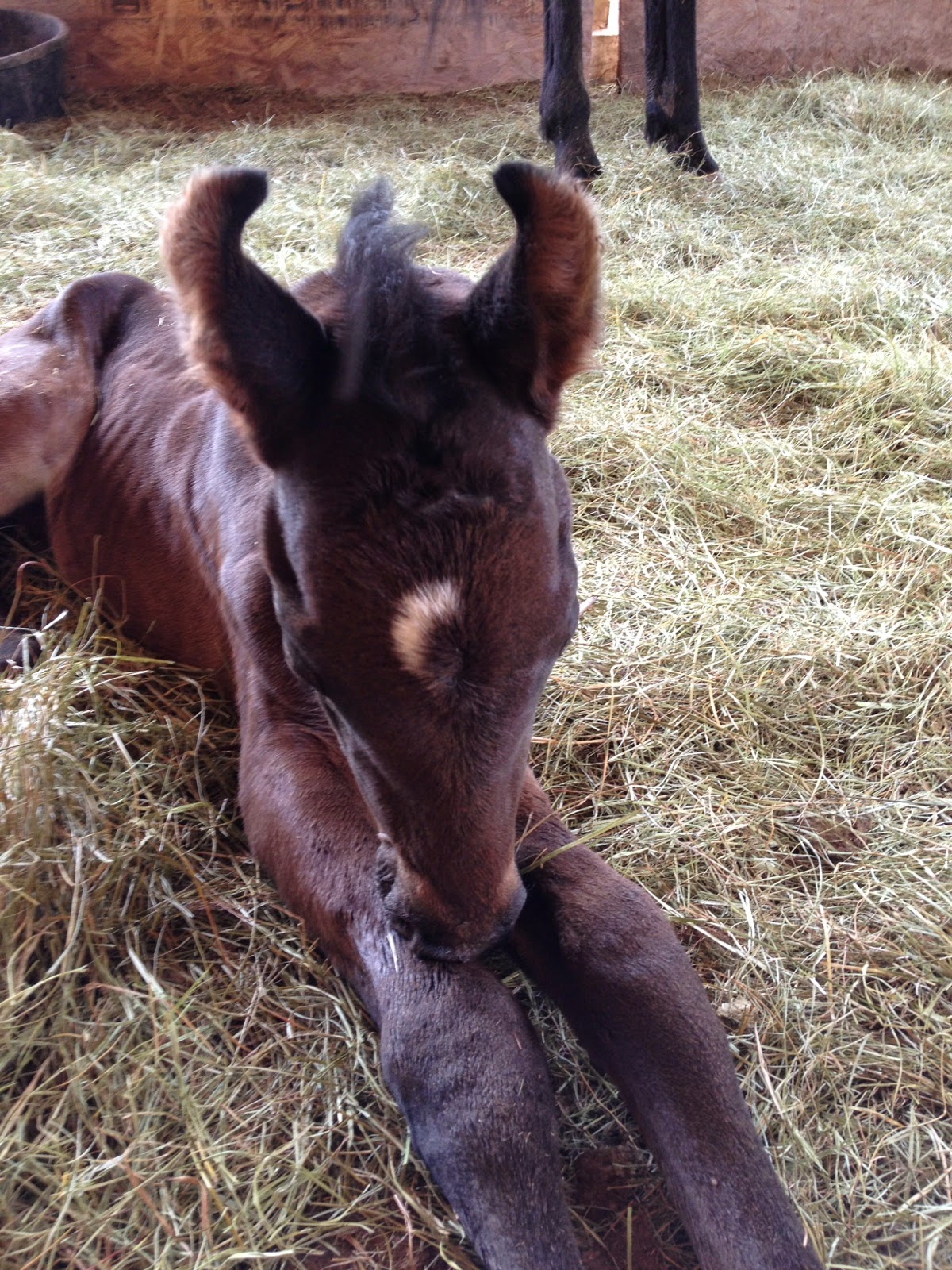 Posted by BrownEyed Cowgirl at 3:21 PM

I agree with you about the horses to are "too imprinted" to their humans. They do tend to be a bit "rude".

He's an awful cute little bugger, though, and I'm glad he's looking so much better, even if he's not out of the woods yet.

Oh my! Look at those ears!
Sure hope he doesn't need that transfusion.

Shirley...I LOVE those ears. LOL. I almost wished they would stay that way. Hahaha. My second favorite part of him to stare at is his muzzle. His teeny, tiny little muzzle and his perfectly shaped nostrils are beyond adorable.

As those of you on fb already know...

His transfusion is a go for first thing tomorrow morning. The vet was happy to see that his IgG number came up, but not far enough to sustain his immune system. Just to be thorough, the vet also tested his white blood cells and they are elevated. That means that his system is starting to weaken, even if he acts like he is getting stronger. Without the transfusion, he would start to weaken and probably die fairly quickly. Doing the transfusion BEFORE he starts to weaken and show signs of going downhill increases his odds vs. waiting another few days to see what happens. I like increasing the odds in his favor, although it is difficult to look at him bouncing around, trying to buck and play and nursing like a little mad-man and think that he could still not make it. :-(

continued prayers for Flash ! I am not an advocate of imprinting, or not at least in the way some view it, I suspect you and I are similar in that we want to handle them some as babies but too much handling I agree can make a pretty pissy horse later. With both Tango and Sprite last year I was forced by circumstance to do a lot more that I would have liked and was very happy and determined to back off and let the momma step up!

I agree there is a point of too much handling, my Dinero was like that...but teenage girl I shouldn't have been surprised. Too bad about still needing the infusion but now he's stronger should be easier for him.

Hope it continues to go well for the little guy, and I agree completely about too much human handling in the first few weeks. I've seen way more negative than positive aspects...did I tell ya about the guy who taught his colt to play tackle?! Was really cute until the colt was about 6 months old...