We are not out of the woods yet, but little Flash is a determined little cuss and he is gaining ground at a steady pace.

Yesterday morning, the vet came, drew some blood, gave baby some probiotics and an antibiotic (that he said would help release the tension in his tendons) and we tube fed him a full meal, because he had not eaten much throughout the night.

Later in the morning the vet called to say that Flash's immunoglobulin levels were very low and he would be out later in the afternoon to give him a blood/plasma transfusion. Pretty scary stuff.

However, throughout the rest of the morning and into the afternoon, Flash continued to strengthen and gain ground. He was finally beginning to get some of his meal directly from momma. He has had a strong suckle from the beginning, it was his stiff and weak legs that made it too difficult for him to stand long enough to nurse sufficiently. But he was perfectly willing to keep trying, so I just kept encouraging him to go to momma first before giving him a bottle.

When the vet called and I told him that Flash was nursing pretty strongly and then finishing another 1/2 a cup from the bottle every 1 1/2-2 hours, he was happy, happy, happy. He decided to hold off on the transfusion until we recheck Flash's IgG levels. It could be that he was just so slow to get started that his system hadn't kicked in yet.

Fingers crossed that a transfusion will be unnecessary.

Throughout the night, Flash continued to improve. By the 6am feeding he was already up and working on getting his own breakfast. By the 8am feeding...He beat me to the punch. When I peeked around the corner, he was getting busy... 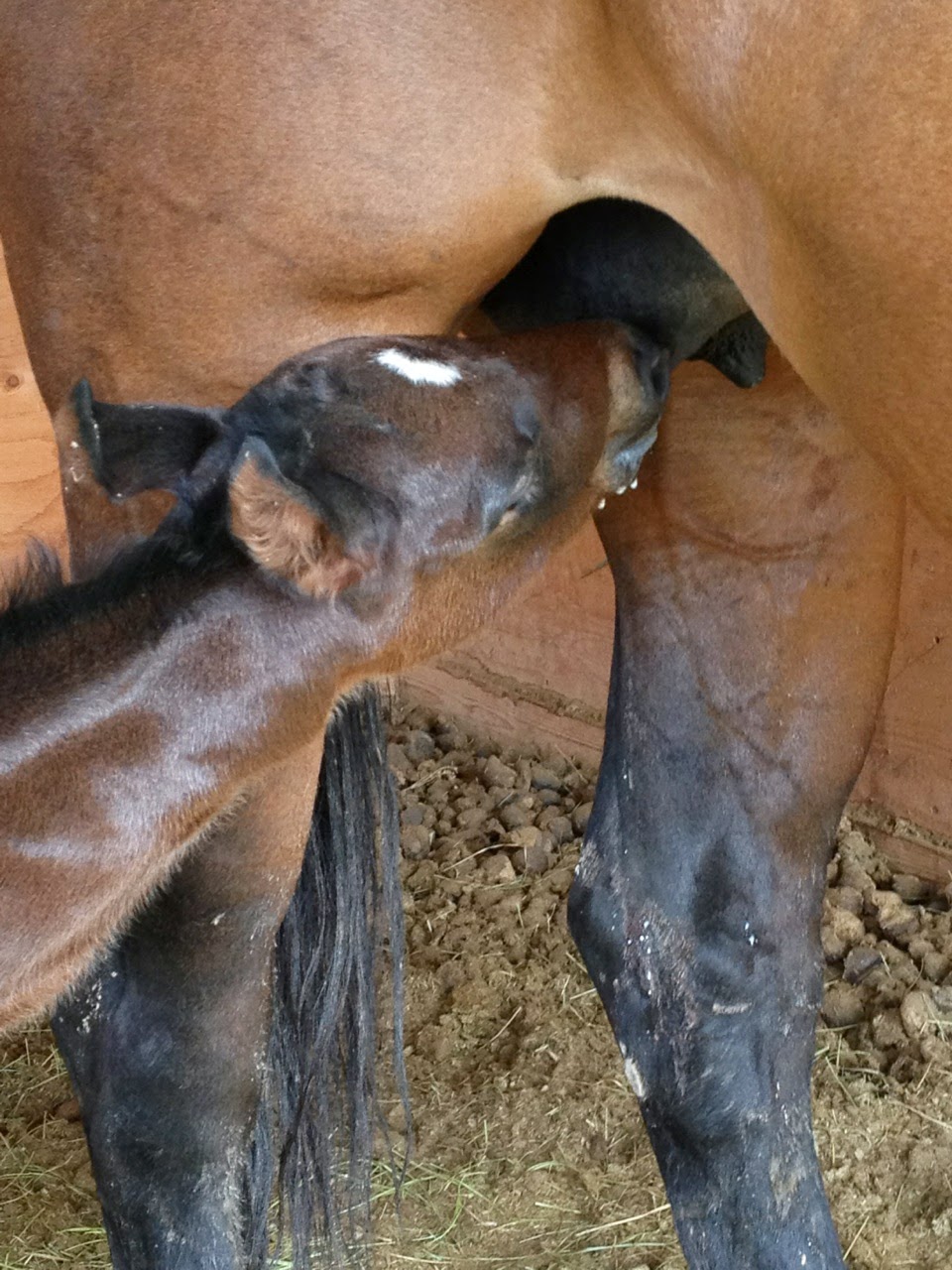 As long as the little guy continues to improve at this rate, he'll be alright. It will take him a little while to catch up to other foals his age, but his slow start will have no long term affects on him. :-)
Posted by BrownEyed Cowgirl at 1:05 PM

Oh he is cute!

Awesome update! So happy for yall.

He's showing the grit he needs and that is part of his heritage.
Can't wait for the galloping baby pics!

congratulations. I sure hope that Flash continues to gain ground.

About what did he weight when he was born?

Ellie-Well, I'd say around 70-80 lbs. I have no problem picking him up still and the morning we was moving him, the vet picked him up and slung him over his neck like he was nothing. I was actually afraid of over-manhandling him at first because he was so frail. He hasn't gained weight yet, but he doesn't feel as fragile as he did the first 24 hours.

Well, he certainly has a lot of spunk and that's the best thing going for him. He is a little beauty! Hope you can get some rest soon.
Bionic Cowgirl