I decided to take some horses home this week, so that after this last barrel race in Globe, I could just load up the 4 remaining horses and head north. I'm ready to be home! I love Arizona and am blessed to be able to lead the life I do...But I do get to missing that husband of mine and the house that is home.

Frenchy is getting big (I saw the baby move!!) and starting to bag up... 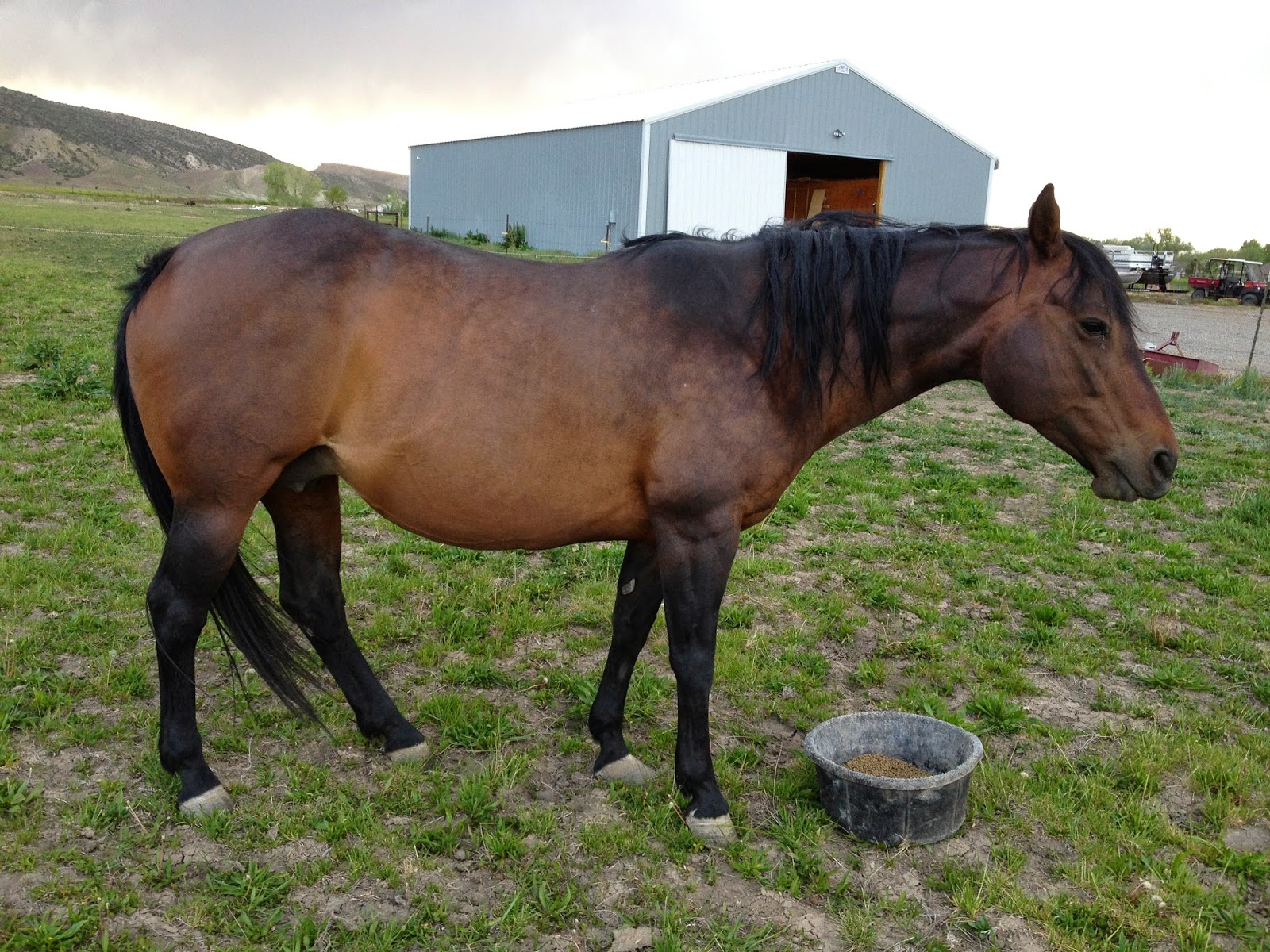 I am slightly jealous of the fact that she is taken with my husband. I was outside unloading the trailer and she did nothing but watch me. MH walks out and she starts nickering for him. Fickle old hag. LOL.

I won't be breeding French back this year. She has has some serious chiropractic issues going on, mostly in her poll, hence her unhappy attitude about being haltered/handled.

This year, Miss Beretta is the one who will be a momma next year. I dropped her off at the court of the magnificant 'Mags'...aka, Firewater Fooler... 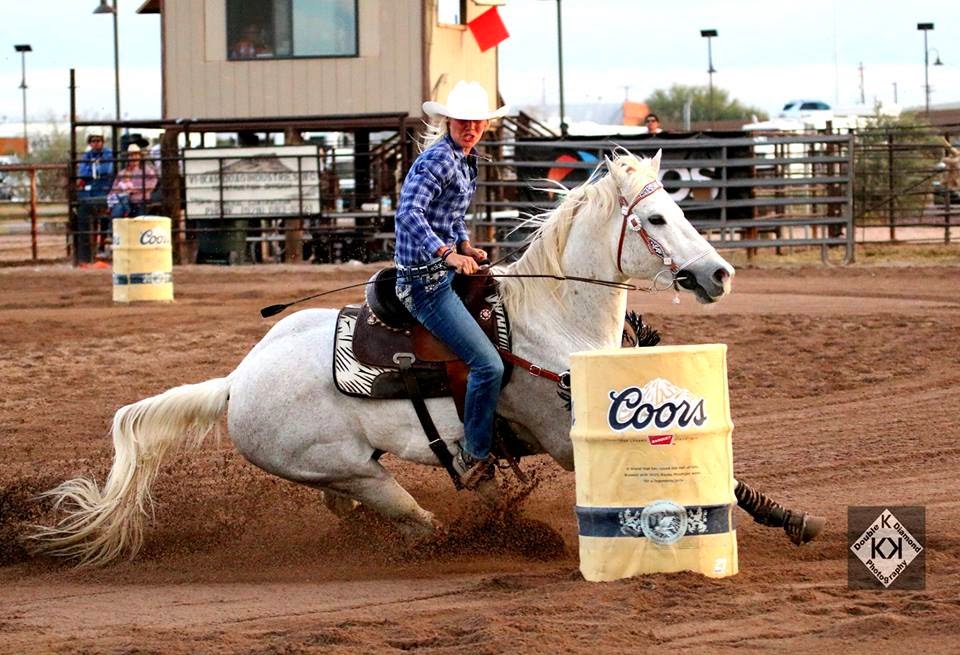 What an arsenal I'm going to have! A CS Flashlight baby (out of Frenchy, who is Moon's niece through the dam side) this year and a Firewater Fooler baby next year (out of Beretta, who is also a niece to Moon, through the sire side).

You know what's the funniest thing about all of this?

I'm not even that big of a fan of gray horses. I've never owned one. Never had any real desire to own one. And both of these babies sires are gray. Chances are...I'm gonna have at least one gray to ride. LOL.

One of my SD mares was supposed to get bred to a Paddy's Irish Whiskey/Rocket Wrangler-bred stallion (also in SD), but that isn't going to happen. He's a nice stud to be sure, but upon further consideration, I don't think he is of the caliber of stallion I want. He produces some super nice 'using' horses, but by now some of his get should have shown up in the performance pen and I am just not seeing that happen. It takes a different kind of horse to make a good ranch-type, using horse and I appreciate those kinds of horses (we raised a lot of them), but it's not what I'm looking for these days. I want r.u.n. and t.u.r.n. horses. ;-).

While I was home (for one whole day. :-/), MH helped me build a cross fence in the pasture to keep the geldings I took home separate from Frenchy. I was not worried about Shooter or Jet. They are both familiar with this pasture, but LJ always makes me a little nervous in new situations. He's not a stupid horse by any stretch of the imagination, but again...this is a horse that was raised in a pen and lacks knowledge of big, open spaces. Turning him out on the whole 3 1/2 acres here in AZ has helped. LJ did get comfortable moving about the entire property here in AZ and I do believe he found it fascinating that he could run laps around the entire property. Kinda reminded me of Forrest Gump. Everywhere he went, he was r.u.n.n.i.n.g. LOL. It also helped that LJ had buddied up with Shooter. Mr. Calm And Cool himself. Shooter will run a little, after all, he is a young horse, who feels good...but he doesn't run willy-nilly like that stupid Jet will. 'Bubbles'...what an appropriate name for that goofy Big Bay horse. (shakes head in disgust).

So anyway, I turned Shooter and Jet out first. Let them make their debute lap around the pasture and when they settled down to graze, I turned LJ out with them...And held my breath!!

As I predicted, LJ took off like a bat out of hell, racing around the other 2 geldings until he got them stirred up and then all three took off pell-mell around the pasture. LJ is a high-energy horse...but like I said, he is not stupid. He locked onto Shooter's hip and stayed there as they all lapped the acreage. Then Shooter had had enough of that and settled back down to graze. Jet and LJ wanted to keep going but since Shooter is the leader, they soon followed suit... 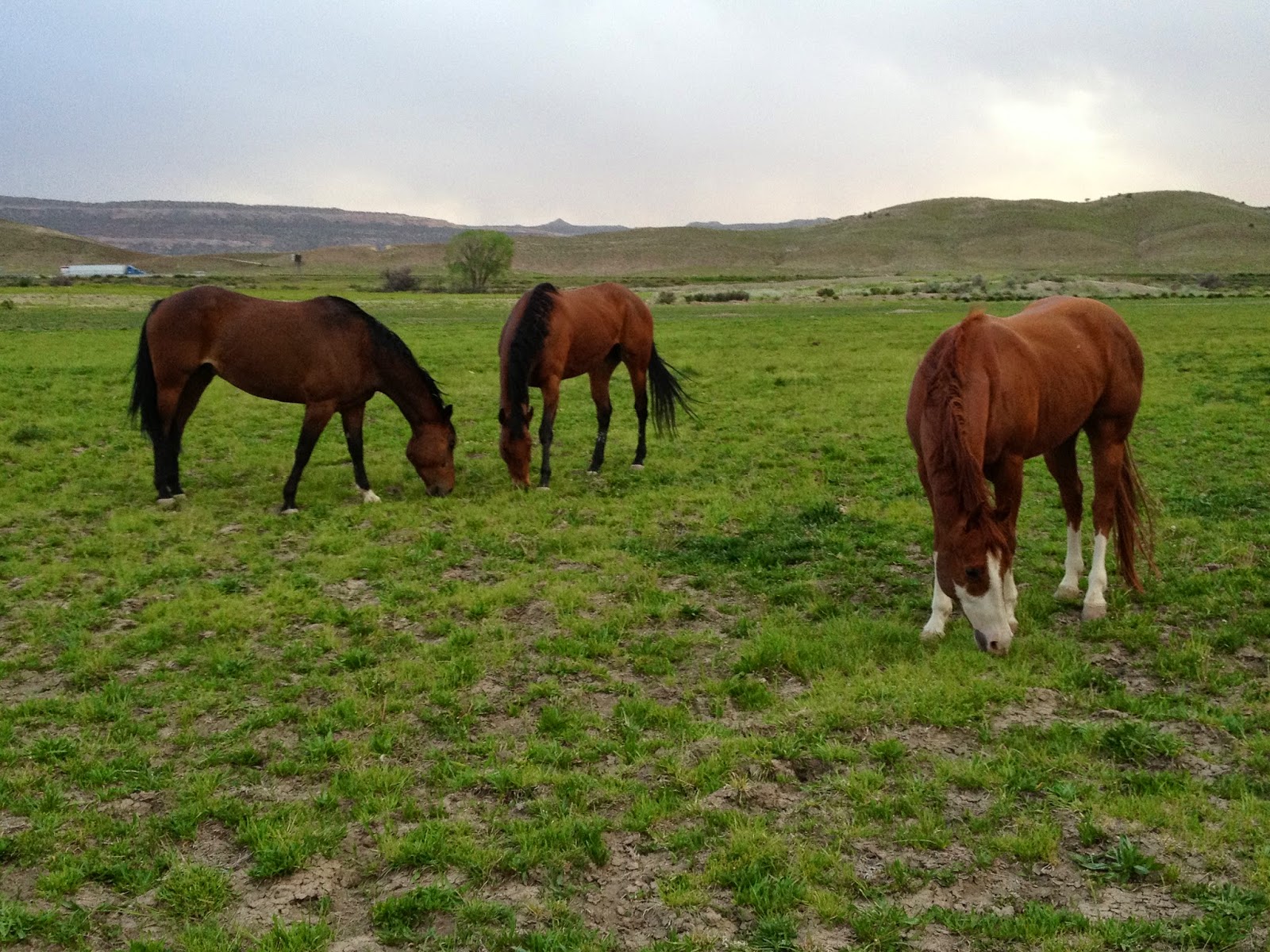 One of things I appreciate the most about LJ is, that while for the most part, he is a confident, bold little horse, when he IS uncertain, he doesn't just act ridiculous...He looks for guidance. He is always actively trying to figure out the correct response to new situations. He watches and studies these other horses, Shooter in particular, to see how he should react.

I found something out from his previous owners that made me drop my jaw and then I had to laugh. Come to find out, LJ only had about 45 days of riding on him, the spring of his 2y/o year! before I bought him in the fall of his 3y/o year. I simply assumed that he had been ridden most of the summer his 2y/o year. You know...Like 6 months worth of riding? Holy hell!! The fact that the little guy handled all of the things I was throwing at him as well as he did...A.M.A.Z.I.N.G!! Makes me love him all the more. I mean, there were times when I thought, 'Man, he sure seems awful green', but knowing that show-type horses are generally well-trained, NOT well-broke, I just didn't think that much of it. Come to find out...He's not just  green in life-experience...He's green all the way through. LOL. My 2nd thought was, 'How the heck do they get that much training instilled into a horse with only 45 days of riding?'. Body control, an incredible stop, the start of a good spin, etc., etc. Fascinating. I must learn more about this. :-D.

I hauled the traveling cat home with me this trip and left him in CO for these last few days I'm in AZ. He was really glad to see his Red Dog... 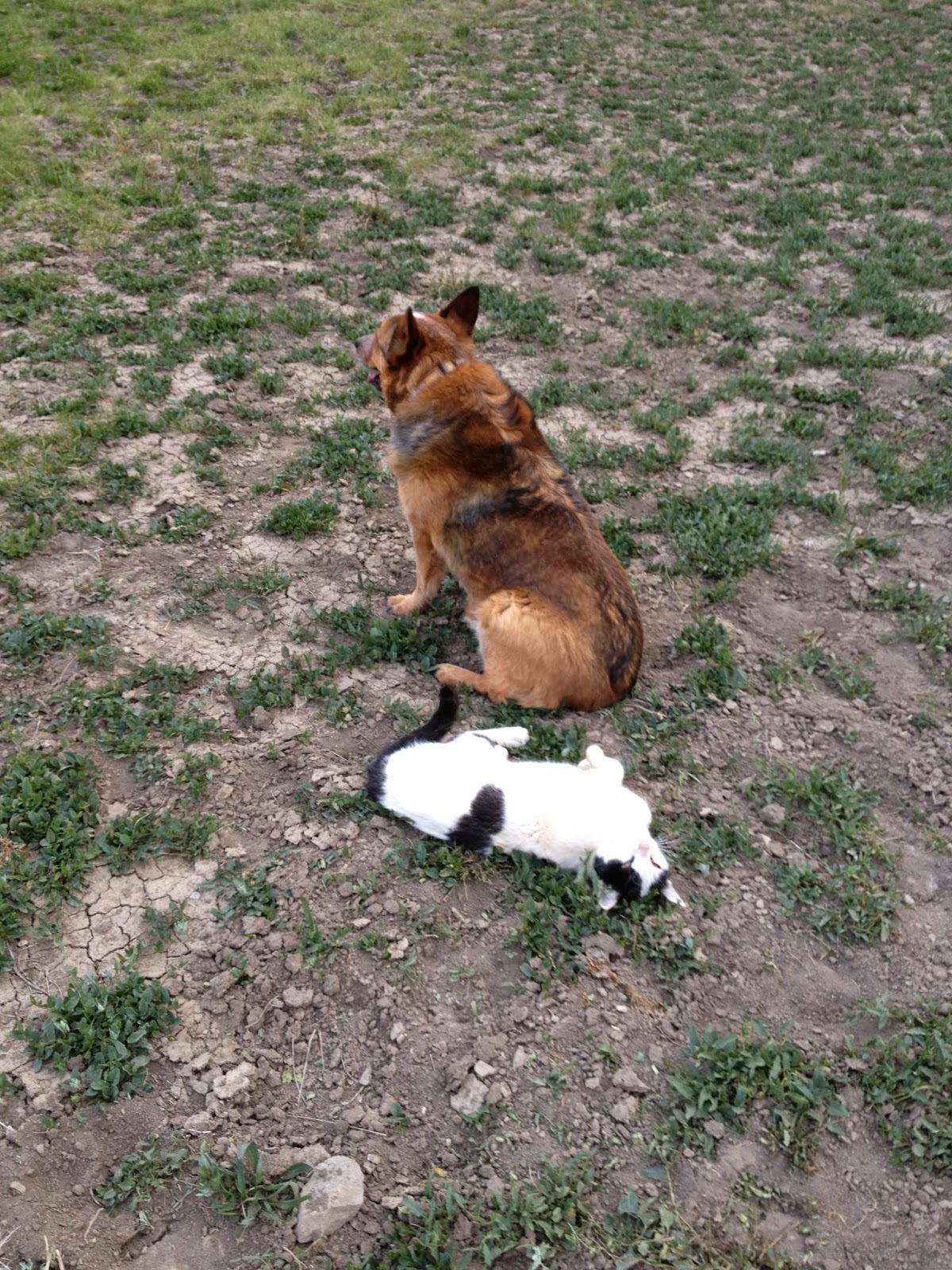 But when he saw me hooking up the trailer and putting my bags back in the pickup he loaded right up... 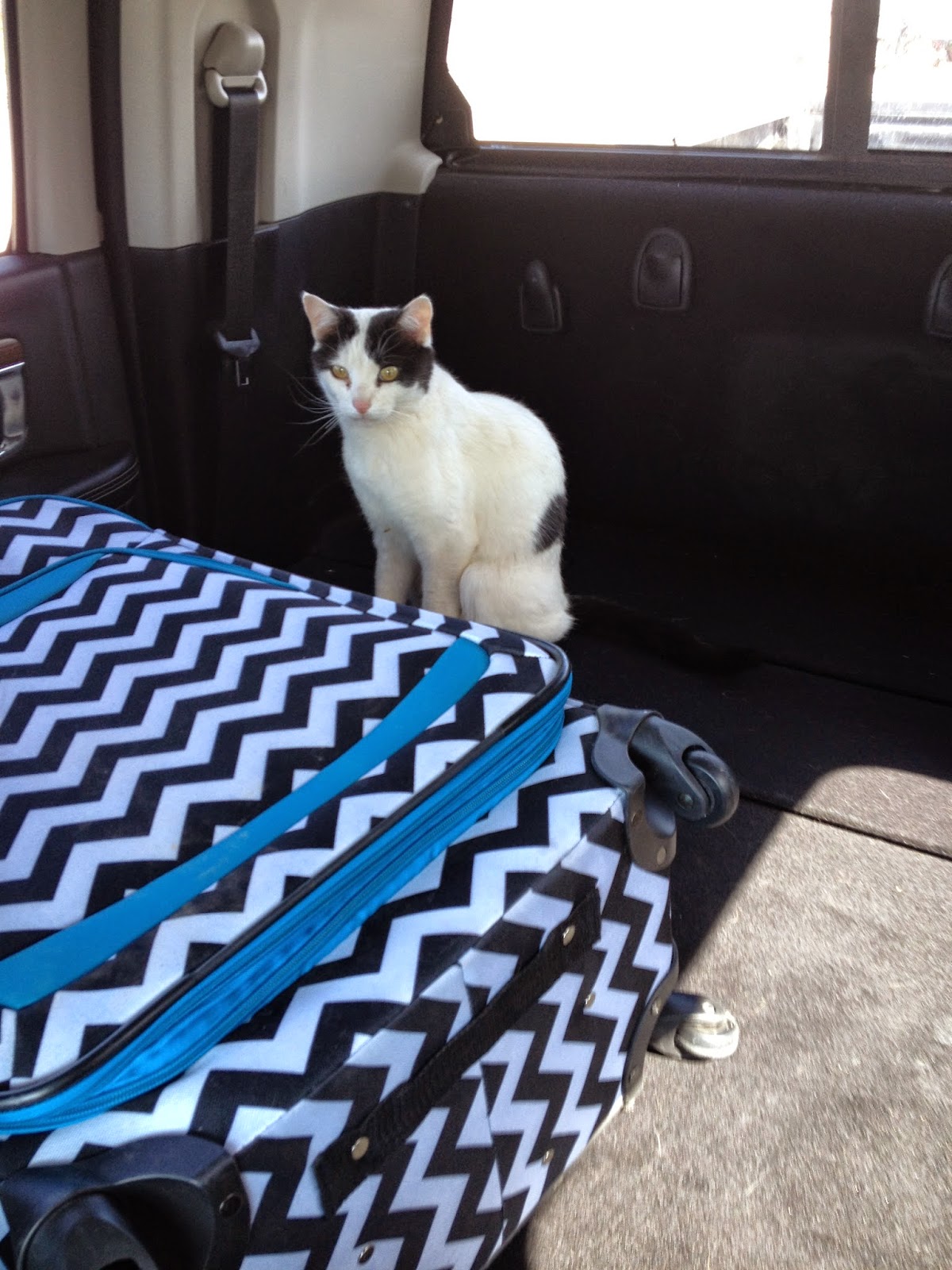 He was most unhappy to be left home. He is particularly unhappy that he has been locked out of the house in CO. I have no problems with this cat when he is alone, but when he is around the other cats, he has to go through the house and spray....everything! I have dealt with his occasional sprays here and there (mostly the curtains) through years, but the last time we went home, he went through the entire house and sprayed everything. I didn't even know a cat could spray that much...Ugghhh! That was the final straw. When in CO, he is strictly an outdoor cat from now on. He will just have to keep coming with me to AZ every winter from now on to enjoy full household rights. LOL.

So...One more weekend, to be spent with my Arizona rodeo buddies and Cindy D. up in Globe and I'll be back in CO for the summer. I'm ready!! I went through my calendar and crossed off all of the rodeos and replaced them with barrel racings, horse shows and gymkhanas. LOL. It was bittersweet. I will miss the rodeos this year, but at the same time...I've done this horse thing long enough now that I know it will only be a matter of time before I am back at it and better than before. :-)

Thank you all for the kind words about Moon's retirement from barrel racing. :-)

Posted by BrownEyed Cowgirl at 1:34 PM

The last time I saw Frenchy she was still sporting some of her winter hairs. Boy howdy she sure is pretty in her summer sleekness. Pregnancy suits her. I cannot WAIT to see that baby!

I'm excited to hang out one more time before you go. This is gonna be fun fun fun!

What a great cat!

Life goes on....
Looking forward to baby pics! And that's pretty cool about LJ, but knowing reining trainers, I'm not too surprised that they got that much done on him in 45 days. They tend to work on the manoeuvres more than anything else.

You're right Shirley. I forget how focused single event trainers are and it doesn't hurt that LJ is bred and built to the exact specifications of that job.

TeresaA-Thanks. He is a pretty cool cat.

Cindy-Wonder how much fun we can cram into one day? ;-)

Some of that behavior with LJ is also the breeding. My trainer (who bred Mocha...she's by Chocolate Chic Olena out of Miss Lorena Wood by Doctor Wood) basically believes that all reining-bred horses should have that temperament. Mocha looks for direction in the same way. She may react, but the brain catches up pretty quick and she looks for direction. She's always looking for patterns (darn horse can count up to seven). She loves trail classes, though, and that's what she's placed best in.

I bought her at five. She'd been lightly ridden, and I didn't realize she hadn't been ridden for ten months before that trial ride. It didn't take much to teach her anything but flying changes--she had the rest down cold, once she got into shape.

I once watched her half-brother (same dam) practice being fenced at liberty, right after he came back from the reining trainer. He'd start about 30 yards from the barn, gallop right up and stop hard, pause, then jog back to his starting place. I watched him do it for about 5-10 minutes. Mocha likes her hard stops at liberty, and she'll do haunches turns and spins when another horse wouldn't.

But she has no clue about pasture life. So yeah, lots of similarities with LJ.