I've held this kind of close to my vest the last week or so because I wasn't sure if it was actually going to stick this time...

But I am making incredible progress with The Big Bay!!

Like...We are t.r.o.t.t.i.n.g. in the round pen...slow, steady, consistent circles...both directions...and he is NOT freaking out and wanting to take off or setting up and throwing his head up and getting rigid like he is about to lose his mind.

The secret, as I discovered...is contact. Lots of contact. Contact with the reins and contact with the legs. I'm literally driving him forward into the bridle, bumping and kicking almost constantly and he just loves it.

Now I don't just think it...I know it...This is quite possibly the strangest horse I have ever worked with.

I discovered his penchant for contact when I went back to ground work on him and I think just plain old longing is pointless, so I set up some ground poles and started working him over them. I was aghast at how clueless this horse was about something as simple as figuring out how to step over a pole on the ground. He never attempted to run around it...He'd walk right up to it and then have to stop and stare at it for a little bit before it clicked in his mind HOW to pick up each foot and get it over the pole. I mean, I know the horse was uncoordinated and moved as if he was always a little unsure of what his feet were doing....But I had no idea it was this bad.

Once he got to the point where he could navigate over a series of poles, I moved him to a cavalletti. Same thing. He had to really stop and t.h.i.n.k. about how he was going to accomplish stepping over that.

I also worked him in side reins, starting with setting them so he had to give a little bend to the inside of the circle. First we walked, got good at that each direction and then we trotted. He loved it. He just totally relaxed into it and got comfortable.

I decided to see if riding him was any better, so after he had been worked in side reins and over some poles and was very soft and relaxed, we went back to the round pen. I started out riding him the way I normally ride a very, very green horse, especially with one who is prone to wanting to blow up, which is with plenty of rein so they can move forward and not feel restricted. He started out feeling pretty good, but as he moved and realized he had total freedom, he started to get freaky again. Let me tell you...'freaky' on this horse is NOT a good feeling. I did some bending and flexing to get him to soften back up and he did, so I quit.

The next day, we did the ground work again and this time when I was watching him move, it dawned on me...I wonder how he would do if I rode him with this much contact under saddle. So I tried it. He was unsure at first, but slowly got more and more comfortable and then he just totally started relaxing and stretching forward and walking out.

The next day we repeated and this time I asked for some trotting steps. Again, hesitancy at first, but once he realized I wasn't going to 'throw him away'...he relaxed into the contact and really tried to maintain a nice, steady trot.

Day 3-I started to add a lot of leg bumping and asking him to round his body, while still moving forward. He does not understand that. The kid that started him changed directions by pulling him  back through his body (hence the sore hocks that caused the blow-up). He was very unsure and wanted to resort back to being 'freaky', but the steady contact on the reins reassured him and pretty soon he figured out he could just walk forward and change directions. He gave a big sigh and totally relaxed.

He got a few days off after that and I just got back to him tonight. He was pretty 'up' about being saddled, but I took him for a short pony in the desert and then left him tied to the trailer while I rode Little John. When I came to get him, he was relaxed and ready to work. A little ground work to get him ready and I stepped on. I expected to have to start from scratch, but nope...he was even more relaxed and willing to move out than the last ride I had on him. I bumped and kicked his sides and worked a lot on lateral softness...He is sooo very stiff in his sides. But he finally made a nice trotting circle with a softly rounded body in each direction and we called it good. 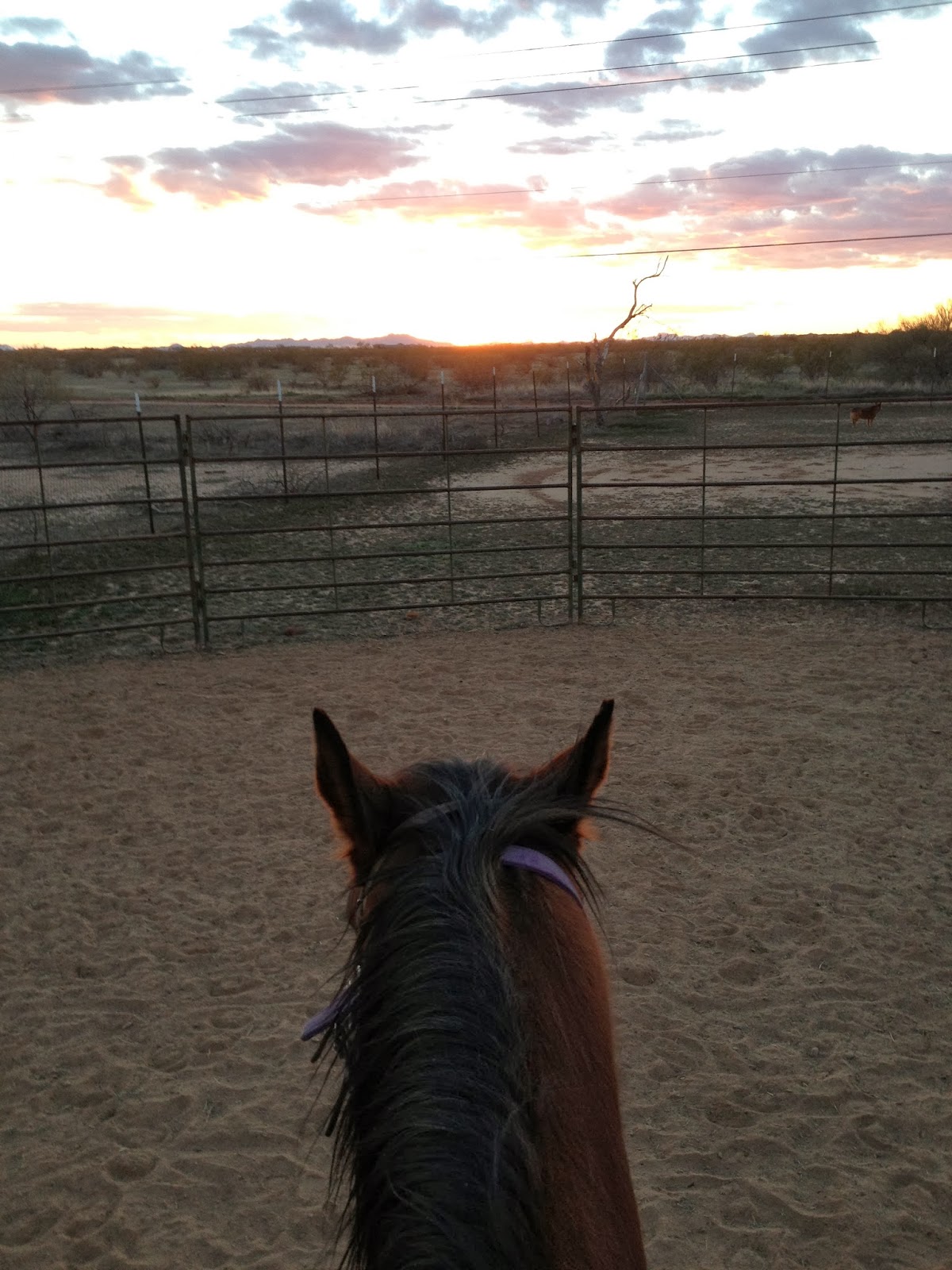 Watching the sunset from between the ears of a not-so-freaked-out Big Bay horse!!


Posted by BrownEyed Cowgirl at 8:04 PM

I was going to mention something about being OTTB and how race horses run into pressure to go faster....oops wrong horse.

So instead I want to say how impressive it is that you are really able to think beyond "Well this is how we do it for every horse". I think the thing that marks a really good trainer is recognizing each horse as an individual.

In my case, I think a lot of it has to do with dumb luck and being too stubborn to quit. LOL. ;-)

On a serious note, I use a lot of Ray Hunt methodology. The original Ray Hunt...not all of this convoluted crap these modern clinicians are hawking. That man spent a lot of time observing horses and then used those observations to train each horse according to what the horse needed. I think he would be pretty mad to see how distorted his learnings have become.

All this time, I have simply been searching for this one thing that helped this horse find the right mindset to learn and we finally found it. :-)

Hmm... maybe he needs to be an English horse? (aren't they usually ridden with more contact than a Western horse?)

Congrats on the success with TBB!

Well, I have long considered the English aspect for this horse. Mostly because I am not sure that he will stay sound if he's used heavily as a barrel horse. His hocks are not optimal either in conformation and due to the fact that they are very high off the ground. I have understood the limiting factor oh his hocks for awhile now, and even the vet commented on it. But there was/is little I can do except get him broke and see if he continues to straighten out. Injections are a certainty for this horse if he is to stay sound.

The aspect of the 'needing contact' is something he will train out of. He just needs to learn self-carriage and build confidence. He'll have to learn that regardless of what he does in life. :-)

They are all different aren't they? And it takes dedication and love of the horse to hang in there until you find out what works best for each one- good job.