First Rides Out Of The Roundpen

I loaded up my greenies and hauled to the east side of the valley to ride with a friend today. She goes to this public arena fairly often...and I'm quite familiar with it myself. I used to live over in this area and we went there a lot to ride.

I was hoping it would just be 'A' and I riding, but a couple of other rigs pulled in and some younger girls showed up on horseback. So I worked Frosty first and did a little touch-up work on his barrel pattern. I love riding with A because she is an exceptionally gifted competitor. We have totally different training styles, but that doesn't bother me a bit. It's her ability to get winning runs that I am absorbing when I get a chance to ride with her.

Frosty was anticipating his 2nd and 3rd turns a little, wanting to kick his hip out and drop onto his front-end a little, so we did a little work on that. Got him setting in there straight again and worked on getting him to change his shape while staying soft in the face and shoulder. Horses just go through these phases when you start competing on them and you just have to go back to slow work and reinforce correctness.

A and I was talking about this tendency and she observed that I have a tendency to get to working on the front-end when my horse gets a little stiff and she told me that if I didn't worry about that so much and just focused on holding them off and driving him on into the turns, he wouldn't have a chance to kick that hip out and after a few runs, he'll figure out his balance and won't be as likely to drop in the front and then he'll start getting soft again.

I thought about this for a little bit and mentally ran a few runs through my head and I think this is the exact point where I messed up with Moon...way back when. I don't remember Spooks doing that, but Spooks was...well, Spooks was just Spooks. He just sort of went out there and ran the pattern. Anticipating wasn't really in his DNA. LOL.

Frosty got a good work-out on the barrels and I can see where I probably need one or two days a week doing some practice work with him. 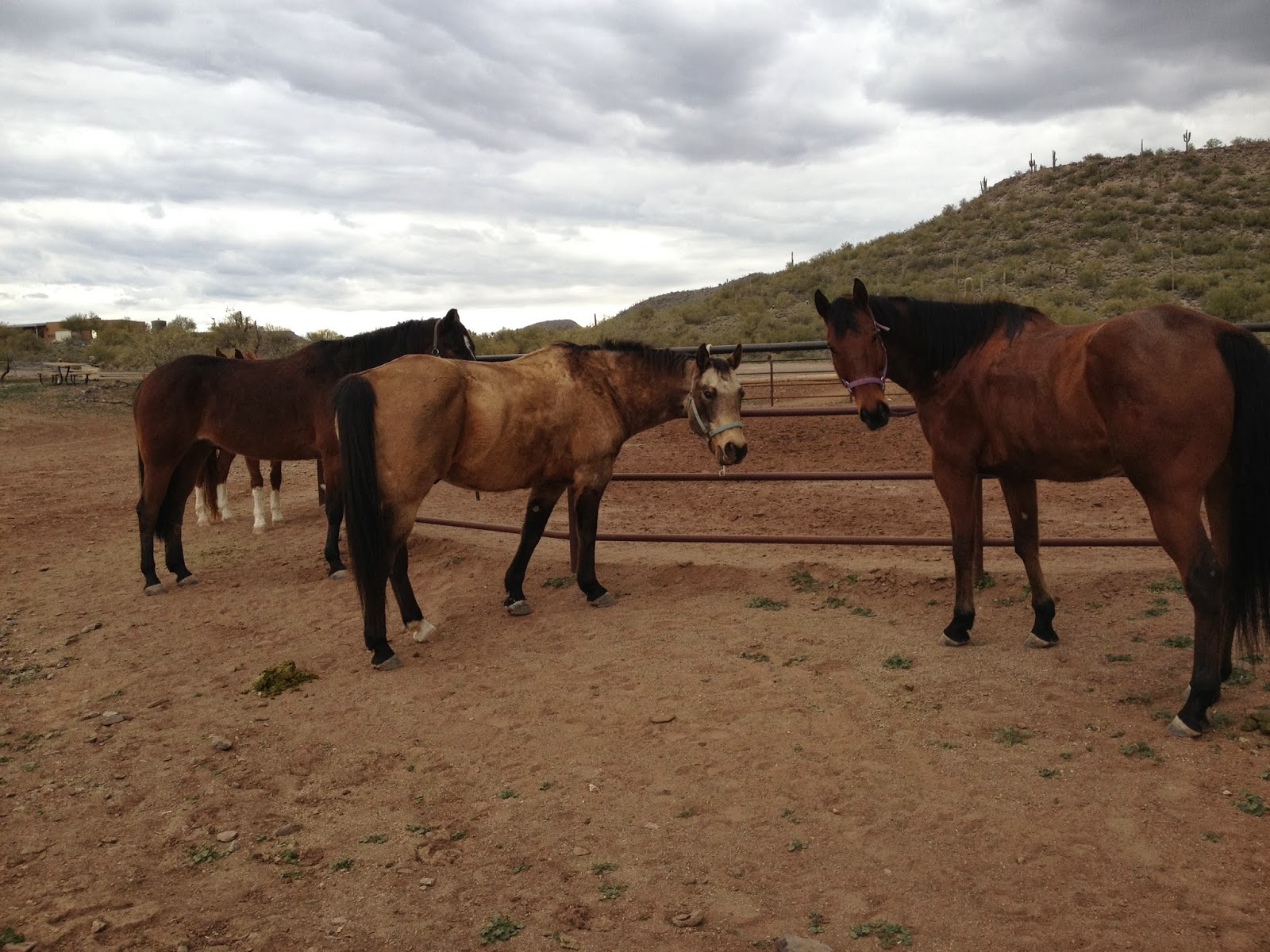 Then it was time to go to work on the greenies. I always dread that first ride out of the roundpen. I decided to start with Shooter. He always handled everything pretty good. I did warn the other riders that this was his first trip out of a round pen and to look out if he run off with me. Shooter is not a bucker, but if anyone was going to run off, he would be the one. He didn't run off...

But he did buck me off. LOL. Of the 3 greenies...I expected The Big Bay would be the one to drop me in the dirt. Maybe Little John...but not Shooter.

Dirty little turd. He rode around pretty good, except he decided he had no clue what 'Whoa' meant and he just wallered around until I would get his head pulled into the fence. He sure can be a pig sometimes. That year off has not been real good for his mindset. Gone is the slightly hesitant, but willing youngster. Shooter is now a coming 6y/o with very definite opinions and is stout enough that it takes me a bit to get him reeled in.

Anyway, everyone was leaving the arena and Shooter wanted to head down toward the gate with everyone else, I pulled his head around and he locked up, not wanting to walk the other direction, so I picked up my rein and slapped him on the butt and he got mad and jumped straight up in the air and kicked out. I wasn't expecting it and sure didn't expect that much power to be behind it and he set me over his neck. When that happened, he sucked back and turned away.

I probably could have saved myself, but sometimes it's just better to go on off, so that's what I did. Just rolled off his neck, cussing him the whole way. I landed, rolled, jumped up and was back in the saddle before anyone saw what happened. LOL.

The old lady can still move when she wants too! Hahahahaha

A lady that was leaving turned around and said, 'What was that?'. I just laughed and told her, 'Nuthin'. He's just being a pig.' I was so quick that nobody even seen it happen. Yay me!!! I don't even think Shooter had time to realize he got me off. Hahahaha. But going off was the right thing to do. A lot of times if these colts get you in a bad position, trying to hang on freaks them out and causes a bigger wreck than just rolling off and jumping back on. Colt Starting101-Rule #1-Learn how to fall!!!

After that, I really spanked Shooter and he didn't do it again. He can be a pissy thing, but he is just as intelligent as his big brother, Moon and he knows when the odds are not in his favor.

By the time I got done with Shooter, everyone was gone and I gave The Big Bay a long, hard look. I had really hoped to have someone there when I climbed on that big sucker. I didn't have a clue what he would do out in the open. But I sucked it up and since the ground was soft, I decided to just see what was going to happen. He's been so good these last few rides in the round pen. I just hoped that what I figured out about him was going to hold true in the arena as well.

It did. The Big Bay was pretty darned good about the whole ride. Grabbed his butt once and I thought, 'Here we go', but I just sat down in the saddle and told him, 'Easy now' and he regained his composure and motored on. Whew!!! We walked all over the arena and did some trotting and the big horse seemed to really enjoy the openness. I'm not saying that he isn't going to come unglued at some point down the road and dump me (I prefer to call if safety dismounting)...but I actually think this horse has turned the corner and is gonna make it as a saddle horse.

The last one to get rode was Little John. By then I pretty much wanted to kill him. He is the noisiest horse I have ever had the misfortune to haul. I mean...THE only time he shuts up is when I would ride by and threaten him. I can see that he needs to go to a lot of new places and spend a LOT of time tied to the trailer, by himself...at the far end of the parking lot...and learn how to deal with life. Another reason he needs hauled a lot is because he is determined he isn't going to figure out this trailer loading thing. He walks right up to the door and stops dead in his tracks. I let him look, sniff, look some more and then ask him to load and he just stands there. He's most definitely flipping me the bird. But there is more than one way to skin a cat and if I decide I'm putting a horse in a trailer...They ARE going to get in the trailer. At home, I just backed my trailer next to the fence, grabbed a panel, made a little pen, flipped the leadrope over his neck and spanked his butt. He got in. At the arena, he did the whole 'I'm not getting in there' thing again and I grabbed a rope, threw it over his butt, asked him nicely a couple of times and the 3rd time I yanked his butt into the trailer. Hahahahaha. He was all like, 'What the hell was that all about?' Personally, I find his tiny bit of belligerence amusing. He is such a willing, happy little horse in every other aspect. He'll figure this out and be just like the rest of my horses in no time. Right now the only experience he has had with getting in a trailer involved a life-changing incident; 1st time in a trailer = a new home. 2nd time in a trailer = getting poked with needles, 3rd time in a trailer = ending up in Arizona. Not what you would call real confidence building experiences up to this point. So I understand his hesitation. LOL

But I'll tell you one thing...That little sucker is a neat, neat ride. He's very well broke and has buttons that I don't even understand. I picked up on the reins and squeezed him to go forward and he ran backward. Not in a panic...I mean a reining horse back-up. I stopped doing anything and he stopped. This time I just squeezed with my legs and he walked forward. Basically I just puttered around on him in all three gaits trying to figure out what his cues were. And don't even breath the word 'Whoa' unless you are prepared because he just folds up and sits down. It's sooooo cool!!!!!! I totally need to learn how to train a horse to stop like this. My horses stop pretty good...but nuthin like this little guy.

And as horses go, Little John is not exactly 'tiny', he's 14.2 or 14.3HH... I just consider him 'little' because he looks so dainty standing next to my other horses... 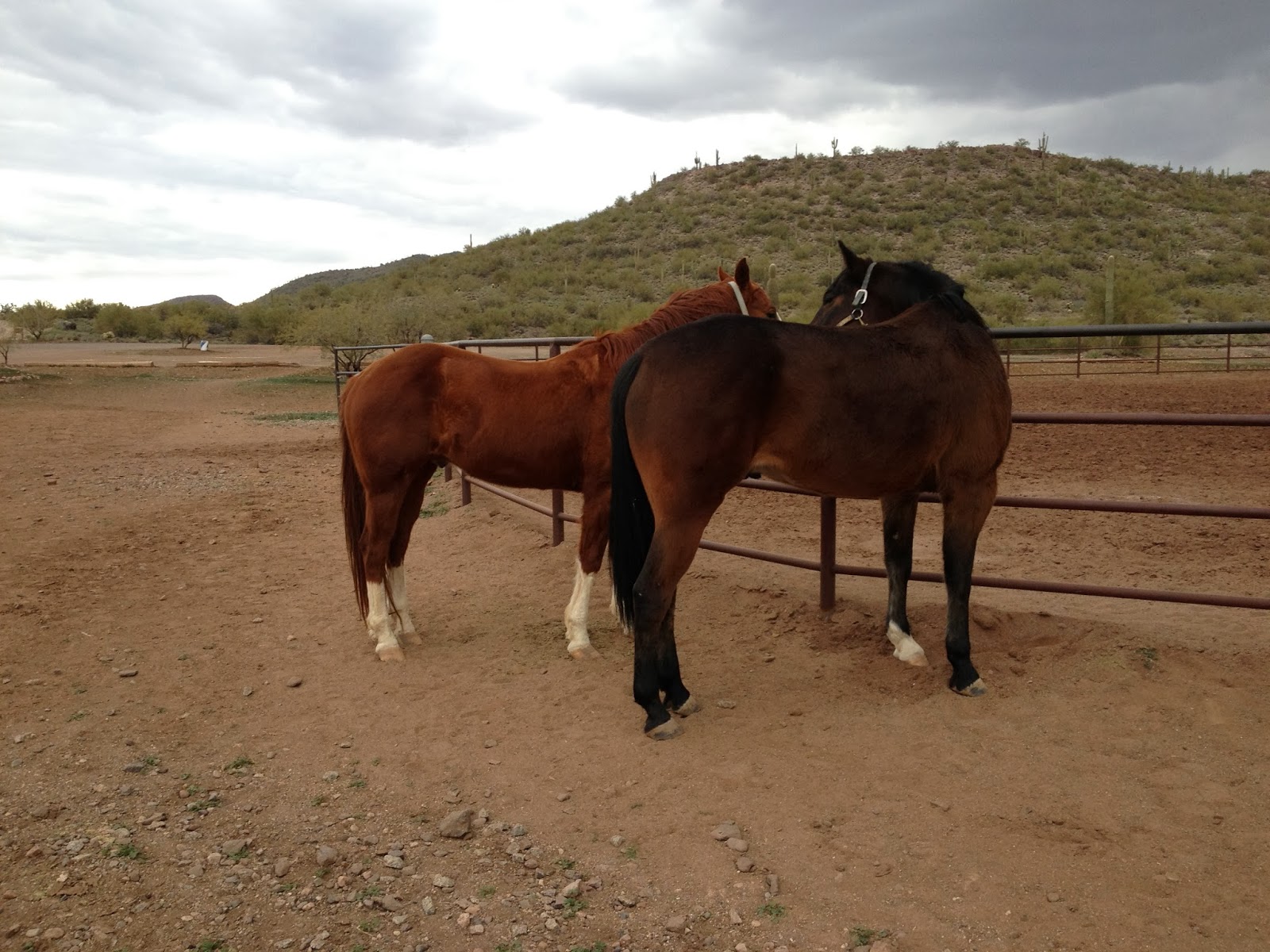 All in all, it was a good first day. I found out that LJ is definitely broke enough to head to the desert on and both Shooter and The Big Bay will be fine being ridden in my open riding area and I'll haul them to other arenas to ride as often as I can. Moving forward...always forward!!
Posted by BrownEyed Cowgirl at 9:11 PM

Dang Girl! Bucked off and back on again in seconds! Smooth very smooth.

It's nice to hear that the big bay is coming along.

See ya Sat! Bring who you ever you want (duh) and we can do either desert or arena, or both.

FYI I'm gonna have you put your horses up in the front pen where Sassy used to be this time. Its bigger than the other one and easier to get to. I will switch out Killian and Trax so that Trax is next to your guys. Trax gets along with everyone. Killian...not so much.

Mason was asking about you this morning. LOL

sounds awesome! except the not so awesome part, but nice recovery!

New reader/follower (: Here's to hoping that my future falls are as uneventful and graceful as yours!

Yes discretion is the better part of valour at times! I've been in that "it's better to bail than hang on" situation.
I'm liking the sound of Little John, sounds like my kind of horse. It will be fun following your journey on all these horses.

At least the ground was soft! It's not the coming off part I dislike, it's the part where you and the ground connect that leaves me hurting. LOL I agree with the idea of sometimes it is better to get off, than hang on. Each situation is different.

Holy shit- Shooter is SIX??? Damn. Seems like just last year he was such a cuuuute little bundle and we were joking about smacking his tiny hams..... Look at him now. Wow.