It's kinda wrong how much I love this little red horse... 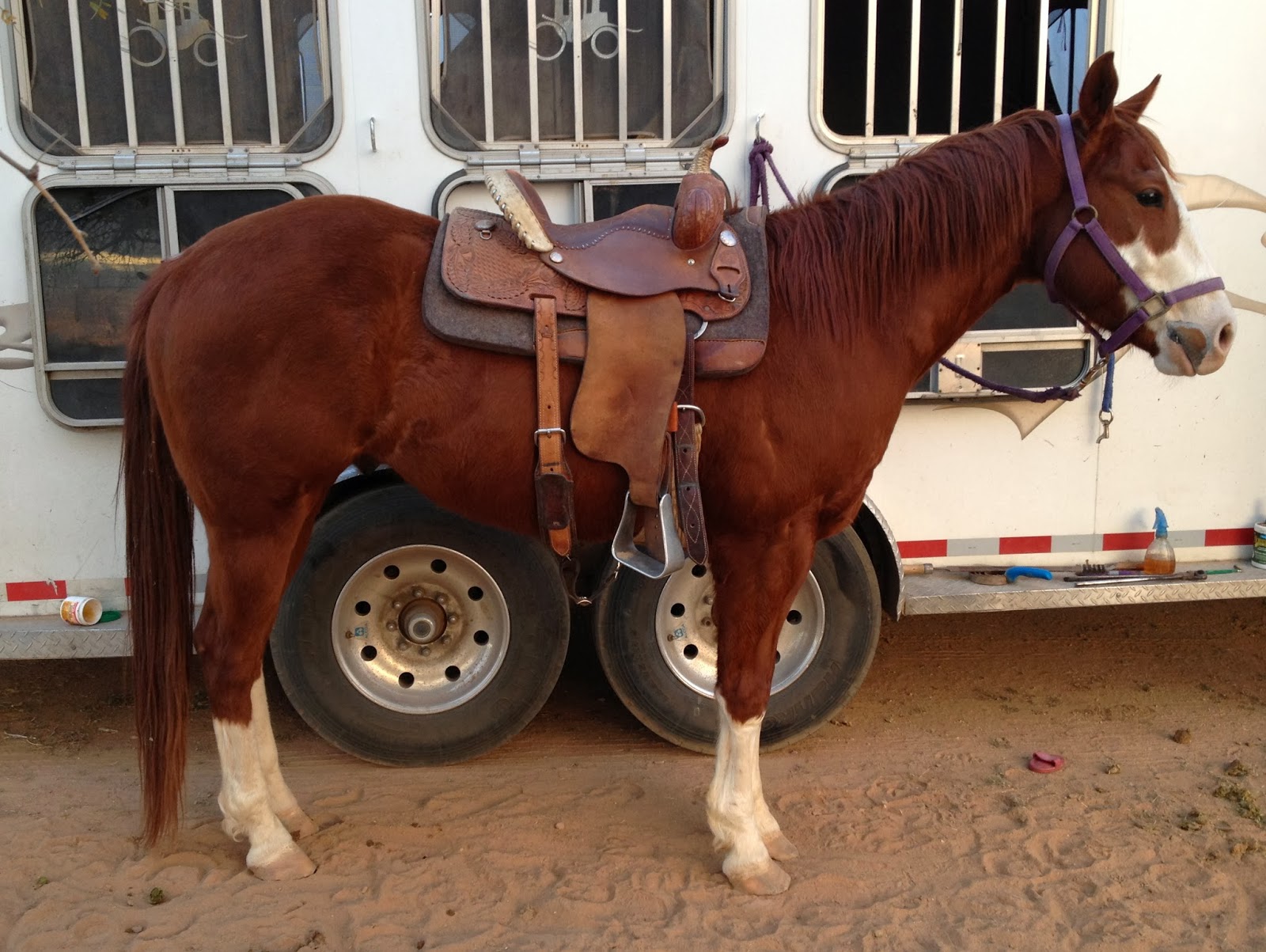 Little John is losing his 'sainthood' though. He's coming a little 'unbroke', which doesn't exactly surprise me. Life with me allows for more...ummm...'Expression of individuality' than his previous life probably did. And he's testing the boundaries to see just how much 'individuality' he is actually going to be allowed. LOL.

I don't mind too much. He's young and he's a bit of a firecracker. It sort of makes me love him even more.

He did find out attempting to bully me was an absolute no-no and since then, he has not made another attempt. I have been working on his feet, I let them get way too long and now I have to be careful about taking them down too much at once because he is not used to being ridden barefoot. But one of the first times I started to trim his feet, he yanked it away, when I went to pick it up again, he shoved his shoulder into me. I was like, 'Hey! That's not cool'. And he did it again, with a little more force. That is as far as he got. He got whacked on the shoulder. He jumped back, but then came barging right back at me and then he really got whacked. We had a mexican standoff for a minute and then that was the end of that.

I was working on his feet again, right before I took this picture, but stopped. He has a lot of bruising going on...so it's shoes for him next week. I just don't have the time or inclination to work through tender feet right now. We'll revisit the barefoot thing again when we get back to Colorado where the ground is a little more forgiving.

LJ is riding out in the open, but it's a very new experience for him and while he hasn't done anything wrong, he isn't exactly what you would call relaxed about it. When I say he is coming 'unbroke'...What I really mean is...He came with a lot of fancy training, but absolutely NO experience beyond that. I have been able to haul him to any arena and he rides well and has ridden well in the parking lots, but desert riding is a whole 'nother thing. There's lots to look at and he's a bit unsure of how to travel out on anything but arena dirt. LOL

I did find an arena he did not like. The roping arena in Buckeye has banners on the fence and shade material hanging down. LJ was having none of getting anywhere near any of that...at first. But being the good-minded little guy his is, he got over it and while I didn't really try to get him right up next to it, he got over the majority of his fearfulness of it.

It was the bellering he and Moon were doing back and forth that was the real PITA. LJ is still a screamer at the trailer, if he is by himself, even with a haybag to keep him occupied. But he has never made a peep while being ridden before. Not true at Buckeye. He was wanting to have a fit and fall in it.

I blame Moon. Moon was at the trailer whinnying up a storm and poor little LJ was just beside himself, calling back to him. I'd finally get LJ shut down on the whinnying and Moon would start in again and set LJ off again. Note to self...Always take 3 horses if LJ is going. At least until the poor, little guy gets more acclimated to this very unsettling life he has found himself living.

I forgive LJ some transgressions I wouldn't tolerate from my more experienced horses. Same as I did Bugs...and Jet, aka The Big Bay...and Shooter. Learning the ropes of a traveling horse is hard at first...and of all of the horses I have had, LJ has had, by far, the least life experiences. At least the rest of my horses had been hauled back and forth to SD a time or two. LJ had never been off the property he was born on until I bought him. He's allowed a little extra leeway 'til he gets used to it and matures a little.

I've had him around the barrel pattern a few times, here and there, but it's time to get serious about getting him patterned up. That means every-day patterning for at least the next month and then I can start taking him to big arenas, with good ground and start loping him through. I still think he is going to be super neat. Since he is just a coming 4y/o, I'm not going to be putting a lot of runs on him this year, just spending a lot of time exposing and seasoning him.

I still want to do some reining/working cowhorse stuff with him and will be taking him to a Dick Pieper Stock Horse/Versatility Ranch Horse clinic in April. He should be a lot better 'broke' by then and doing some trail obstacles and seen some cows...nothing fancy. Just the basics. Just things that he should be really good at anyway and will only make him a better barrel horse in the future. :-)
Posted by BrownEyed Cowgirl at 9:46 PM

Not wrong...right! How anyone couldn't love that horse is beyond me.

Its okay to fall in love once in a while ya know!

He's got a sweet face and a good engine behind him but his front feet are a mess. Good thing you've got a good farrier coming, he needs his heels and bars shortened ASAP.

Oh yes, his feet are a mess. All of them actually. He has a lot of bar on the inside heel of each hind foot too. I took out a lot of bar on all of his feet and trimmed his heels down a bit, but once I started running into all of that bruising, I had to stop. He has a lot of sole impacted in there and not being familiar with his feet yet, I was hesitant to see if it was surface bruising or deep.

His feet are changing as well. When I bought him, he had 'reining horse' feet and the farrier trimmed and put a 'performance horse' shoeing job on him for me. His heels and quarters are starting to widen, but his toes still want to elongate. So it's going to take a little bit to get him right for what I want to do with him. :-)