I finally got synched with my farrier and got a couple horses in to get some front shoes on. I opted to only put shoes on Frosty and Buddy at this time. Everyone else's feet have toughened back up and they are fine barefoot. Actually, I probably could have left Frosty barefoot as well. He's gotten over his bout with IR and is not sore-footed anymore. However, he will always be more on the flat-footed side and even when he is not struggling with IR, he has a tendency to short-stride in the front. I just want him striding out and making some progress.

Buddy's feet have improved a lot recently. After he blew that abscess and my vet hooked me up with some Magic Cushion...I treated both of his front feet with it and I was so impressed with how well he stood up after that and was getting around. He traveled almost completely normal. Buddy has the typical flat-as-a-pancake Thoroughbred feet. It doesn't matter how much healthier his feet get, they are probably always going to be that flat on the sole and prone to bruising and abscessing. Having recently trimmed Buddy's feet, there wasn't much for the farrier to take off and I could see him pursing his lips at how thin the soles were. He said, 'We gotta get this horse's soles off the ground and just putting shoes on isn't going to be enough.' I thought he might be leaning towards solid pads again, but he had a little different method in mind. He called it a 'rim pad'.

Basically, he took a hard pad, riveted it to the shoe, cut the center of the pad out and nailed that the hoof. Buddy's foot is lifted that little extra bit off of the ground and gives his sole some depth and the extra relief it needs... 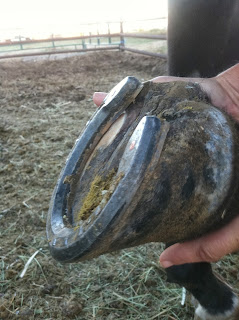 You can pretty much tell how flat Buddy's feet are, even in this side angle picture and the extra depth the pad under the shoe gives.

The farrier did find that the sole around the blown abscess was still super thin and a bit soft, so to protect that foot, he left the pad intact, applied some medicated hoof packing on the sole and nailed the shoe on.... 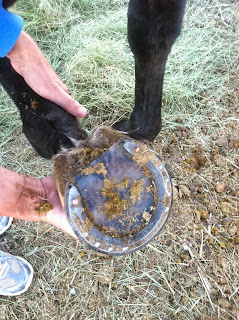 The next time Buddy's shoes are reset that soft spot should be completely healed and of adequate thickness to simply go with the rim pad. Only time will how much more Buddy's feet will change and improve, but for now...He's finally able to stand up and properly load weight on his front feet.

He walked out of the farrier's barn, hesitantly stepped out onto the gravel but within a few steps he started standing up and walked more confidently. By the time I got him back to the trailer, he was striding normally and licking his lips. He's a happy, happy pony!!...And he's going back into a training/conditioning program immediately.

Out of curiosity, to see if giving Frosty a little more depth in his foot would help him, I had the farrier apply rim sets to his front feet as well. Frosty has done well with just plain shoeing in the past, his feet aren't as flat as the TB's, but IR horses are notorious for thin soles and I thought, what the heck. Give it a try and see if I notice a difference. It's no harm, no foul adjustment. If it helps, we'll keep doing it. If it doesn't, we'll go back to plain shoeing.

In a way, it's sort of the same thought as the No-Vibe shoes that many of the upper crust barrel racers use. Of course, those shoes are aluminum and the vibration minimizing pad used is lighter weight, so the shoes are as light as a feather. But they allow a deeper grab and improve traction, while absorbing shock. LOL...Since neither Frosty of Buddy are 'world class' barrel horses and they will be rode out in the open a lot more, I'm going with the homemade version. ;-)
Posted by BrownEyed Cowgirl at 7:51 PM

very cool work, will be interested to see how it works out