I swear....This has been a horrible week for losses. My husband's friend, another club member from the other sided of the state the very next day, a friend's beloved horse, and the tragic loss of 19 firefighters in Arizona. Thank you everyone for the condolences for Parrot.

Around home, it's more of the same...try and beat the heat to get horses worked and continuously move water around to keep everything from baking to a crisp.

We had a sudden spike in temperatures last week and it greatly affected Moon's breathing. I was glad I had pretty much decided to stay home from that big barrel race last weekend. It took me a few days to get him righted again, but he's back to normal. Up until now, he has been doing great on just his supplements, but when the summer heat sets in, he seems to have a real intolerance for hay. So, I switched him to mostly bermuda pellets and his ultra fiber pellets. The one flake of hay he does get per feeding is sprayed with water...he won't eat it if it has been soaked...so I have to settle for spraying it....and religiously spraying his pen to keep the dust settled. Most of the time he's out on pasture during the day and only up at night but that doesn't seem to help, so I daresay that it's more the heat that bothers him and weakens his immune system than just the hay, but there is not much I can do about the temps, so I am just treating him as if he is purely allergic to hay.

After having to take it easy for a couple of days, we have made huge strides in the riding department. It took a lot of work to get Moon settled down on the barrel pattern again, but he's there. I set up a bunch of different things; my pole bending poles, ground poles and cones around the pattern and every time he gets overly excited and doesn't want to work the barrel pattern calmly, we ease off of the barrel pattern and I work him harder on something else. When he relaxes, we go back to the barrel pattern. Three days of that and he decided to chill.

The little sorrel is doing okay. He's still not 'sound' and mostly I am just working him to see if I can get him 'sound enough'. I have upped his training routine and made his riding sessions much shorter...but way more intense. Any time I can, I try to ride him twice a day. He seems to be coming around and holding up better this way.

The Big Bay has been getting rode...With the aid of a foot-rope. I kinda want to post pictures, but am a little worried that someone will see/read about it and try it on their own and that little get-up is not something that anyone should ever 'just try'. However, I am riding the horse on my own and he is not blowing up with me. But something is not right with the way this horse travels. He has the most uncomfortable herky, jerky motion and it feels like his is crouching on his hind-end. And I don't mean like a bronc that is just waiting to blow up...I mean totally abnormal movement. I highly suspect he is severely misaligned in his poll and has been since he was very young. Problem is, I don't have a good chiro for that and until I find one...The Big Bay isn't going to get much better.

Someone that is improving rapidly is Buddy, the abandoned TB Megan picked up in AZ... 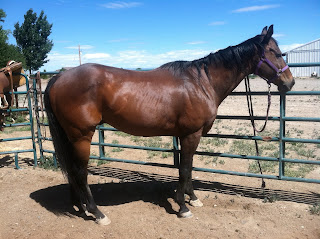 He's gaining weight on a daily basis and his poor ground manners have almost entirely disappeared. Very little of it was due to 'training'. I had to get after him one time for being kicky and I occasionally have to remind him that I am not a rubbing post, but other than that, the majority of his poor behavior was due to nothing more than starvation and ulcers. He's a whole lot better under saddle as well. Much quieter and willing to walk. I haven't gotten his teeth done yet, but since he has been gaining so well on a normal diet, I have been able to procrastinate on that. Right now, the only struggle we are having is keeping shoes on his front feet. The poor horse's hoofwall is still so thin that every week or so a shoe falls off and I have to go get it nailed back on. The farrier is hesitant to use clips because he is afraid it will pull a chunk of hoofwall off and then we will be screwed. His soles are super thin as well, so barefoot is not an option. I am wondering if I might have to buy him a set of boots until we get a more healthy hoofwall grown out. It's just going to take some time to undo the years of neglect he suffered. He is a sweet, old horse though and I like him a lot. I told Meg to buy him to fix up for re-sale, but I don't think he's going anywhere soon...if ever. I'm kind of planning on just fixing him up and turning him into a horse for the local jackpots next year. LOL.

Happy 4th of July everyone! Stay safe out there...It's CRAZY this year!!! Moon and I are off to start our little 4th of July rodeo run. I opted to stay close to home and hit some of the CPRA rodeos vs. entering any of the big Pro rodeos. I'm excited. We have been working hard and I know we are back on track. Now it's just time to put the practice to work. :-D.
Posted by BrownEyed Cowgirl at 10:08 AM

I was wondering how Buddy was coming along - he looks amazing! I, for one, think you should definitely keep him and jackpot him! Sounds like a good plan to me!

Good luck on your runs, sounds like you have Moon's number.
Interesting that the bay is not traveling correctly. Maybe, just maybe...brings to mind a mare I knew that had a neck injury. Would go along good as gold until she turned her head just right, and then psycho...she was not fixable, the injury was too bad. She was one of those horses that did make a great broodmare, and threw sweet babies. The fact that he's not traveling correctly shows up in his whole body if I remember a previous post. Interesting, veeerrry interesting...

I'm sorry for all you've been going through. When you mentioned a chiro, I dug around for a business card my farrier gave me. I don't know how far she travels: http://www.impulseequine.com/

So sad about Buddy, but thankfully he is in good hands now and that is great that you plan on keeping him! He looks like a really nice horse.
Good luck at your upcoming rodeos!

Sounds like you have been busy.Hope the news next weeks is better such sadness this week

My girlfriend is the most awesome chiro I have seen work on horses. I know she'd be up for a road trip but 3,000 miles is a bit much for us. :)

Wow Buddy sure is looking good! Sucks about the feet though, boots may be the only choice till he can grow some new better hoof.
Hope you can find someone to fix up the big bay, hes just to nice to not get going at barrels, but no point if hes not moving right.

Have you heard of animal and people chiro Jay Komarek in Gunnison? He is the best chiro I have seen (even travels to England to adjust the Queen's polo horses a few times a year) Here is a cool interview with him that explains his philosophy: http://www.youtube.com/watch?v=WRarpNSzO1k&feature=youtu.be
His website which has his address & phone numberis: www.jaykomarek.com

I watched that and called Dr. Komarek immediately. He is out of the office until tomorrow, but I left a message and hope to hear back from him soon.

I will haul the big bay to him if I have to. Gunnison is not the far away. Even if I have to hang out for a couple of days to let the adjustment settle in. Just finding someone that close, who seems to really know about poll adjustments is AWESOME!!!

I hope he is able to help. He is the only chiro who has been able to adjust me since I was thrown 35 years ago and suffered nerve damage to my neck. Thanks to him, for the last 8 years I have been able to lift my arms above my head. :-) Gunnison is having Cattlemen's Days this weekend with its big PRCA rodeo, so you can enjoy the festivities while hanging out.

I know...I was going to enter Gunnison this year and then go over to Buena Vista for a CPRA rodeo, but I let the entry date for Gunnison pass my by while I was re-grouping and I didn't want to drive all the way to Buena Vista for one run. Ended up being that Parrot's memorial is this weekend anyway, so no rodeoing for me til next weekend.

I am going over on Tuesday of next week and overnighting at a friend's house. Dr. Komarek will work on the big bay on Tuesday evening and I'll haul home the next day.

Komarek sounded intrigued by the big bay. I'm sure hoping he can fix him.

Thanks again for the input!!