A Couple Of Adjustments

I have just a couple more purchases on my list to perfect Moon's barrel racing accouterments (that doesn't look right, but spellcheck says it is ??). I had been debating whether to buy this pad or not... 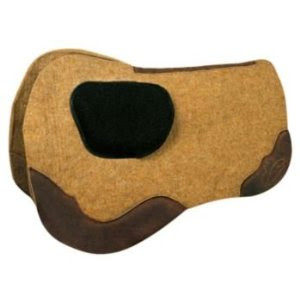 It's the Reinsman Sharon Camarillo Sure Fit Orthopedic Pad (what a mouthful). Earlier this spring I had ordered a Tod Slone pad for Moon, and although I love the pad and it fits everything else, it just doesn't fit Moon. I overed on Megan's Colorado Saddlery Pad and that seems to work better than any other pad I have. But, I'll be bringing Megan's horse out here soon and she is going to need her pad back. Besides, it wasn't a perfect fit on Moon, just better. I am still getting a bit of slide when Moon runs. I actually think that with the above pad, I will be able to use my Sharon Camarillo saddle on Moon. The saddle does fit him across the shoulders, it just wants to slide back into the hollow behind his withers. It's just the way he is made. Having him fit has helped some, but that spot is just never going to change much on him.

The nice thing about this pad is those black pockets are actually open. I can change the thickness of the foam inserts to match what Moon actually needs vs. the other pads that just have a built in thickness in that spot. So if he changes for the better or worse, I can adjust the padding. The pocket is also on the top, so there is no lump or pressure under the pad. The padding holds the saddle up. That aught to keep Moon moving free through the shoulders when he runs.

The other little adjustment will be moving him from a twisted snaffle to a Jr. Cowhorse bit... 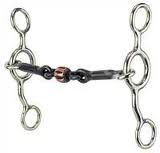 I like this one with the smooth mouth and copper roller. It's similar to the curb bit that I use on Moon for other events and he seems to like that mouthpiece. Moon doesn't have what I would call a soft mouth. He's really pushy with his nose. Always has been, always will be. When I first started running him, I ran him with a gag bit. That kind of helped him to break over at the pole, but since he runs as straight as a board, he just started giving me a little face and dropping his shoulders out from under. That's when I went back to the twisted snaffle. He has run fairly well in that, but is getting to strong.

Moon is changing. He's stronger and fitter than I have ever had him before. He also knows his job in the arena. He's far from being one of those 'crazy, stupid' barrel horses, but he's no deadhead. The last two times I have run him, he was starting to run through the snaffle before I was ready to let him go. That does not work. I can't have him taking off before I have him in position. I'm hoping the bit of curb action will not only keep him from running through my hands, but will help him rate straighter.

Moon is not one of those super bendy, supple horses. We work on suppleness daily, because if I didn't he would be like riding a 2x4. However, when we are running, I have realized that by using one hand with either the gag action or direct pull actually throws Moon's body out of position. Mostly at 2nd....our nemesis barrel. I realize that I have a long way to go to consistently help Moon get that barrel right but hopefully the change will help both of us.
Posted by BrownEyed Cowgirl at 1:27 PM

That pad looks like a great idea. Love that you can change the thickness to what you need, since all horses are different!

I was eying those pads when I still had my Tucker saddle. Don't need it now. Hope it works for you.

Thats kind of a cool pad, I had a mare whos saddle always slipped back, she was older and getting a swayback and it just wanted to sit way far back. I wonder if one of those pads would have helped her.

Crystal-I actually just saw some pads that were specifically made for sway-backed horses. First thing I thought of was an old rope horse my brother had. Oh my, the conglomeration of pads he put together for that horse-LOL. He started with a navajo blanket, had a cut out felt pad and an additional felt pad that he wittled down in the front, so it filled the gap under the saddle. It worked, but Sheez!

I admit it, I'm a geek and I checked it out... to me it looked like it should be 'accoutrement'. Turns out both ways are correct :)

It sometimes amazes me the sheer amount of different pads there are nowadays. And everyone claims their pad is the best, or swears by the material their pad is made from.

Bits, one of the few things I got that seemed worth knowing from the Powell clinic I went to: Molly said that about 90% of horses running at the top of their game NEED a bit with shanks. Can't remember why off the top of my head (that's why I took notes lol) but at the time it made sense.

Amazing how the 'hardware' can make all the difference doesn't it?

I've never been one of those snaffle bit forever kind of people, but it 's been a long time since I've had a horse that ran hard enough to need anything different.

Last night I put the curb bit I usually use for reining on Moon and trotted him around the barrels. That got his attention and he started sitting down straight again.

I am very excited for my neighbor's son to get his arena finished. Meg and I were invited to come rope with them this summer. THAT is going to be really good for Moon, as well as the others. This riding without doing anything is getting boring for all of us. If I do nothing but track cattle...it will be beneficial.

At first glance it looked like a giant avacado. All I could think was What in the world???

I like that you can adjust the padding for the horse. Once you find everything that works, he should really be able to open up and knock you socks off.

I love reading your posts because I always learn something. Even though I'm still not actively running, I always ride like I will be and I read your blog with my horse in mind. Love it, thanks!