It Makes It All Worth It

Meg and Turk placed 6th (of 8) in her Showmanship class... 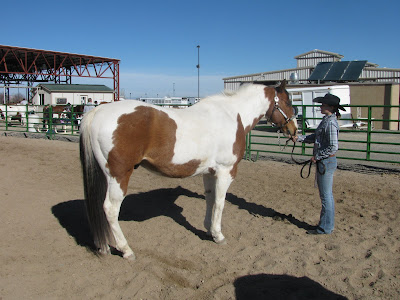 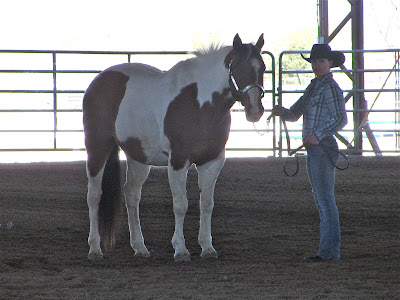 Frosty and I placed 6th (of 10) in the Adult Showmanship class... 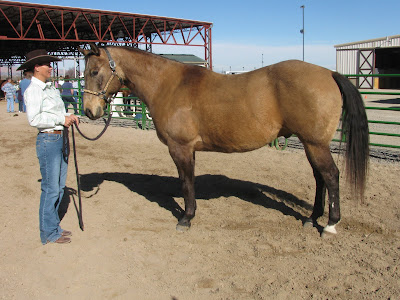 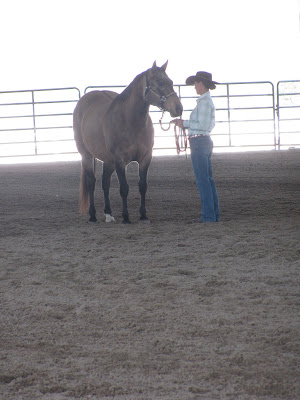 Posted by BrownEyed Cowgirl at 9:40 PM

Sounds like a great weekend. At least the weather cooperated for one day. Too bad it had to get so ugly the next day.
That's great about Moon! Except for the freak out at the fence. Sounds like something Brandy would do. Crazy!

Wow sounds like a fun and productive weekend, but too bad about the weather being yucky for the barrel race.

I think you guys did great. You've got the first events out the way and now the horses will settle down and get to work. Can't believe that weather, that would suck.
I've also done the same thing with those barrels, the OLS syndrome. Those lights get me too!

I have a habit of looking down too... although we don't have fancy schmancy lights to set the pattern lol

I know what you mean about the barrel being set light. I know for a fact I've seen that happen at our finals. The barrel crew is always made up from a draw of the entrants so they should know and care if the barrels are set right, but I guess if its not affecting THEIR run then why give a sh!t right? I always give them a little twist to set them in the ground and I gentle push to see if they're sitting flat and won't fall too easily.

Your halter horses look really good to me, well groomed and fit. Moon sounds like he's catching on quickly. Sounds like a good show overall.

Sounds like it was a great show, weather notwithstanding!

I find my self staring at cones, if the put a laser light on them I'd run em right over.

Can't they turn off those things for the runs? yesh

Sounds like a great first outing overall. Poor Moon , must have forgotten where he was and woke up with a start to do that!

God I can't beleive I haven't posted about my ponies in forever. I spent most all weekend with them so I really need to get on that!

I like the fact that you show in blue jeans!

Not too bad a weekend, and never mind showmanship- your horsemanship is evident.

Sounds like fun! I sure know what you mean about horses having anxiety about being surrounded in the show-ring. After a failed attempt at drill team, Sunny's still leery of other horses running up behind him and/or crowding him into the rail. He assumes any horse that takes notice of him is going to attack.

Trail-riding with a bunch of different horses - and considerate riders - has helped his confidence level a lot, but it's never a sure thing. I haven't been brave enough to risk showing under saddle yet....

excellent all the way around! Now you've done it, I was riding western there for a minute..
Moon sounds like a blast.. Where's his picture, hmmm?
overly demanding out..

Yay for a good weekend!

What's exhibitioning? Just getting a go at the barrels with no time?

I totally hear you on the weird weather.

It was a very fun weekend, even with the lousy weather on Sunday.

Funder-That's exactly what exhibitioning is. It's an inexpensive way to give new or problem horses a chance to practice in a competitive setting.

Ohhh, that's awesome. Nothing like that in endurance - LD's are maybe $20 cheaper than 50s. But management still has to pay the vet and feed you, so I understand why it's half price for half the distance...

Even with my long-winded comment I forgot a couple things! lol

1- you mentioned Ed, are you planning on going to that clinic in Durango?

2- when you guys have exhibition runs when do they take place? In our district club we always make the exhibitioners go at the end of the jackpot.

3- I remember a post where you were talking about warmups (I think the Sue Smith clinic?) You mentioned liking a nice simple warmup just to get blood flowing and muscles warm, not the loping your horse into the ground in endless circles like a LOT of barrel racers do.
When you were talking about this past weekend and how everyone was crowded in to get out of the weather I thought of those people, then I remembered they tend to be the same people that warm up their horse and then let it stand, tied to the trailer or mounted by the fence, so they can watch everyone and then jump on and make their run.

Cdn-Yes I am. I guess I better get on the ball and make sure to get registered for that one. I really want help before the season gets rolling. If I have to, I will retake his clinic in August. I am dead serious about this barrel horse thing this year. ;-)

Our TO's (Time Only = Exhibition) are run before the races. It kind of depends on how people behave on how they run them. If people are respectful and make sure to stay out of the TO runner's way, they will let several of us go in and stand around or move around. If people are just being dinks (which is prone to happen with barrel racers), they clear the arena and only let the person making the run in the arena.

The warm-up thing is crazy...I see people who get on their horses and stay camped on them for a couple of hours (at least). If they aren't loping, they are parked by the fence sitting on their horses.

I'm lucky with Moon. He is not a hot horse. He does the best if I just make sure he is listening and supple and then leave him alone until I absolutely have to get him out to get the blood flowing. I have learned that if I just get off of him and hand-walk him until just a couple of runs before mine and then go stand by the gate, he stays the most relaxed and seems to be more prepared when he goes in. If I cannot get off, I start working my way to the gate by doing bending exercises. I think that has helped keep Moon quiet all this time. He knows when I gather up my reins that it's time and he starts looking. I don't gather up my reins until he is within a few feet of the gate and is already walking forward. If I didn't gather my reins, he would walk into the arena plumb flat-footed and totally relaxed just like any other time.

I have a young horse that is terrified of those other horses. I'm going to have to take him to a couple of schooling shows just to hang out to see if that helps bring his anxiety down.

Sounds like the horses did great and that Moon is much improved over last year. That's very cool news!!

As for little red lights, I'd probably be gawking at the suckers too. Things like that just draw my eyes. LOL

Sounds like you had a wonderful weekend even if the weather only cooperated for one day. I like taking it easy for the first show too... it's nice just to get the horses out and enjoy the day.