To Good To Pass Up

I stopped to get feed this weekend and just because I had to use the bathroom, found out the store was having a killer sale on some of their boots.

Usually, I don't bother going to that side of the store very often, because their clothing and such are so high priced, I won't buy there.

I'm a penny pinching miser! (My Honey calls me a cheap-skate;)

But considering there were sale tags on the racks, I stopped to look. A sale tag to me is like a bug zapper to a bug....I just can...Not...resist.

The lady tells me that everything is 25% off and then there is another 50% off of that price.

Even my non-mathematical brain can figure out that is more than 75% off of e.v.e.r.y.t.h.i.n.g. on those racks.

But I paused...I have multiple pairs of boots. Do I really need these?

Well, actually NO, I don't.

But my dear little girl could sure use a new pair of boots. I ended up with her last black pair because they stretched out and she has needed a replacement pair all summer.

So I run back to the house....what the heck, it's only 30 miles...grab the kiddo and we head back to the store to puruse. I'm all giddy with excitement...because you know...as long as Megan gets some new boots, surely it wouldn't hurt if momma gets a new pair too...riiiigggghhhhttttt???? 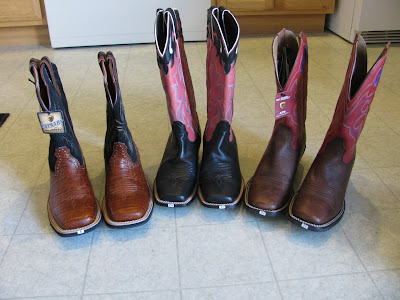 The two pair on the left are mine...the cognac Ariat Showbabys and the black/rose Noconas. Megan also got a pair of the black/rose Noconas (which she wore to school today) and she scored another pair of Ariat Rowdy's(far right). Her favorite pair of boots are just like these except her old pair has a purple top. I told her to get the Rowdy's even if she wasn't a big fan of the red top because...Helloooooooo....they were on sale for $64. The Noconas came out at $60 each pair and the Showbaby's at $54.

Meg also got a cool black belt that has 'bullets' on it...which of course, she is wearing already, for $10 and I picked up a white western shirt with some colored embroidery on it for $15.

All because I drank too much coffee and had to pee.

Well, and because the horses can never be left out, I bought another 100 gal. Rubbermaid tank.

So much for this month's budget. Maybe it is a good thing I have to start going back to work at the office? I mentioned to My Honey I needed to buy hay again...and Turk needs his shoes reset and I might as well have his and Moon's teeth done...and...and...and...

He just looked at me. (gulp)

We had company yesterday and they had a small Schnauzer. OMG...He was the cutest thing ever!!! But he was fascinated by the squirrel and watched him the whole time. I tried to get pics of them sniffing each other, but they just kept coming out blurry. They would sniff and then the squirrel would race laps in his cage and the dog would leap back and forth, then they would sniff again.

Needless to say, the squirrel was t.i.r.e.d. last night and when the company went to bed and took their dog with them, Scrat racked out in a big way... 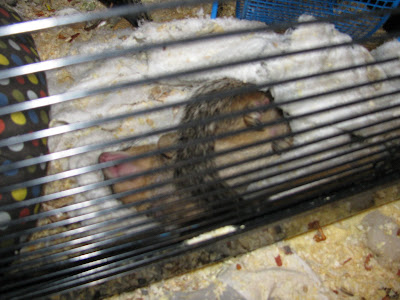 Posted by BrownEyed Cowgirl at 9:55 AM

Yee haw ! Great deal on the boots! I love it when that happens

LOL I can just see the look on HoneyMan's face... Yep... office here you come!!

(Yeah--- you really wanted to add One More Thing to your day, right??)

Scrat is too flipping cute. TOO cute.

Wow awesome deal on the boots! I love sales as well, have a hard time buying anything on regular price anymore, lol.
That squirrel is adorable.

I need more squirrel photos. You know. When you get to it.

Congrats on the boots! I can never find a deal on those things!

Wow - what a great deal on the boots! I wouldn't have been able to walk away from a deal like that without some loot! (stuff never seems to go on sale like that here...)

Excellent bargain shopping!! Sales are the ONLY way to go, in my opinion...love the boots.

Sweet deal on the boots! I would have definitely brought some of those home, at that price!! I go through boots so much quicker now that I wear them everyday for work, and I really need a new work pair! I can never find any good deals like that.
Scrat is adorable!! That is one tired squirrel!

Those double discounts are actually very deceiving. My time in retail taught me all about such discounts. They look bigger to the consumer than they actually are and are designed to draw you in.

Not that you didn't do good but they really don't add up to 75%, more like 62.5% in this case. A bargain for sure but on a hundred bucks that's $13.50 less than 75% would be.......just another sneaky way for them to get as much out of your pockets as painlessly as possible.

Ya gotta love retailers........oh, and wholesalers do it too! That's how I learned about in and on a $1000 order the difference added up fast. It took me awhile to figure out how I was going over budget so easliy. LOL

Rising Rainbow beat me to it. It pisses me off when the stores do that!

And yea, that 'rat' is way too cute. A non-stop source of entertainment. I'll keep posting on him.

Sadly those shirt prices are pretty much the norm here (the regular price, not the sale) Awesome deals though, and I love the boots :)

AWESOME!!! WOWSER I wish I could find some deals like that!! What a score! Thank God for a little coffee and girly bladders *giggles*!!

I just love a good sale!!