All In A Rush

Isn't it the way of things, that when they start to come together...they all come together in a rush?
Because you guys like him...here's the 'rat boy' all tucked into his bed for the night... 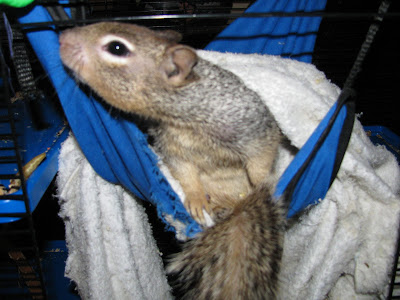 He has figured out how to dismantle his wheel and although he has studied it carefully and works very hard, he just cannot quite get it put back together. That of course, pisses him off royally, so he has destroyed his hammock. He's a weird little creature. However, his hammock is his favorite place to sleep, so we keep piecing and sewing it back together for him. He's such a brat!

I have to go back to work at the office part time. I told them I would fit in what I could. Apparently, the office manager has been slammed for quite some time and there is a lot of catching up to do before the end of the year. I probably wouldn't be irritated except that I have asked repeatedly how things were going and everybody in the office just kept saying...'Fine. Everything's just fine'. When it came to My Honey's attention that there were some things not getting done...the excuse for not asking for help earlier was, 'Well, we knew you guys were busy and we didn't want to bother you.' Arrggggghhhhhh!

Heellllloooooo....does the word OWNERS mean anything to you people?

Yea, we kind of expect the employees to tell us when they need help. Did they actually think I was outside working and riding in the 100+ weather through the ENTIRE month of July?

In other fun news, Moon laid down in his pen last night and must have hung a leg under a panel. His right hind is all scraped and swollen. Last night was his night to go out and it got too dark by the time I was done with chores, so I thought...I'll just turn him out for awhile in the morning. Yeesh! I turned him out after soaking his leg and doctoring it. Hopefully moving around will help the swelling go down. He's tender on it, but it's not major...just inconvenient.

I've got my calls in to schedule Turk for his re-set and for both Turk and Moon to get their teeth done. Hopefully I can get that out of the way this week.

I picked up my load of hay...a beautiful 30/70% grass/alfalfa mix. Beretta is going to do really well on this and I have thought that my other horses needed a bit more protein in their diets. I have several loads of grass hay spoke for and several more loads of 60/40% grass/alfalfa spoke for as well. It's really kind of a pain in the butt to have so many horses that needs different things. But what the heck right?

These horses are fixing to start earning their hay! ;) 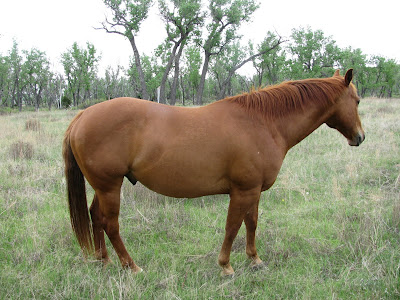 (sorry, old picture from the ranch)...starts going to the trainer. I think the trainer, who is not as young as I thought he was, was a little nervous about me at first. I'm sure I sounded like one of those overly-protective horse mommies. But, I simply explained that I do not vaccinate my horses and I prefer not to take the chance of putting him with others that might make him sick and that I also have him on a special feeding program at the moment and don't want to saddle anyone else with that chore. (Whatever!...I just don't like the thought of taking one of my horses and dumping them off at someone else's place)

So instead, I will haul Bugzy Boy over every evening, let L work him and bring him home. If things proceed nicely, which I am sure they will after visiting with L for quite some time, I will also throw in a saddle horse and I can ride in their arena while Bugs gets worked. Two horses getting worked at the same time...COOL!

The only unfortunate thing about doing it this way, is that I am also supposed to start my dressage 'lessons' next week. I put the quotes around lessons because they are not going to start out as formal lessons. C is a sooper-dooper lady and simply told me to start coming over in the evenings and she will help get me started on the more formal aspects of dressage. She said she can comfortably get me as high as 4th level, but if I want to go any higher, she will hook me up with a couple of different trainers/coaches in the area. The really nice thing is that C is actually a 3-day eventer, so she is also going to teach me the proper way to start jumping.

I'm going to be riding my own horses, so at least a couple more will get worked on those evenings that I ride with her. Now, I am ever so anxious to get Jet started under saddle because next year he's going to be my English horse... 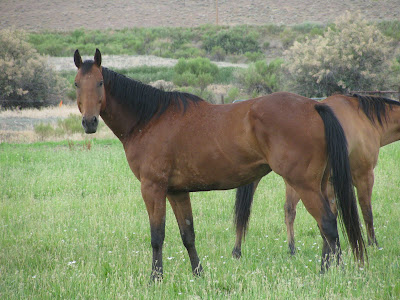 He'll do quite nicely according to C. When she saw him, she looked at everything and then she gave me the funniest look. I'm sure she was wondering what that swan was doing in my herd of chunky-monkey's-LOL. Jet may end up being THE english horse, but until then everybody else is going to have to take turns. I think Moon will love the jumping, but he is going to HATE the dressage part.

In my spare time, I can start going over to the neighbor's and roping again and I would still like to hook up with my barrel racing friend and go to her arena and ride with her. I know she works in the a.m., so I am hoping we can shoot for early afternoons. She lives close to L's place, so I can just throw the sorrel horse in and he can learn to wait his turn. ;)

Yep. Lots of hauling to OPP(other people's places), but I have never minded that and I think it has always been good for the horses. I never have problems with my horses pawing or being stupid at the trailer. At least not after the first couple of times they have gone someplace that is-heeheehee.

Crap...the only thing is...I have to go buy me a pair of proper field boots, a couple pairs of breeches and a cap with a harness. I'm very fortunate though, there are 2 english stores in the immediate area, so I should be able take care of that easy enough. I'm mostly unsure about sizing, so being able to try stuff on is important.

Now, to shower and I'm off to work.

Of course, it is just an absolutely beautiful day out. Arrrgghhhh!!!!!


Posted by BrownEyed Cowgirl at 11:17 AM

*thunking head for you*

Dude-- so no one BOTHERED to tell you that when it was like 900000* out and working INSIDE would have been NICE???? For Petes sake people! Get a grip!!

I'm envious of the riding time and lessons. So make *dayum* sure you ride for me too, OK? ;)

Kiss that rotten pony from me too please!

I love your squirrel. I want one. lol

I also want your boots.

Totally hear you on the trainer bit. I hate leaving my horses anywhere I don't know intimately.

Didn't know you jumped! I did for year! Don't really have a horse for it right now but would love to get back into it.

Yeah for doing it all and being a true well-rounded horse woman! Yeah!

You had to post jet again, didn't you.
Nice, nice, oh, he'll do nicely, indeed.
He looks a little like the big old bay, with a nicer head.
What a shoulder!
(whistles..)

Jet will definitely look fabulous under english gear! 3-day evening sounds awesome! WHile you're at it with all these horses why don't you just head on over to KS and pick up mine, take her back for 30 days and then send her back to me!? Sound good? :-)

Jet is gorgeous.I think he will look wonderful in English gear. You sure have lots of big plans I got tired just reading it! Hope Moon bounces back quickly

Jet is a beauty! Where have you been hiding him all this time? I think he would make a fabulous English horse!
Sounds like you have everything all figured out with work, lessons, training etc, boy, you are one busy girl! I wish I had that kind of energy!
Hope Moon recovers quickly! And lovin' that cutie patootie Squirrel! Sounds like he has quite the personality!

Well, I went to the office and seems mostly what needs done is filing and getting some manuals assembled. Time consuming tasks to be sure, but not sure how that came out as 'We are soooo swamped and behind'.

Oh well, I can handle all of that easy enough and still make my riding schedule work.

I shouldn't complain about our office manager, she is a great gal and I sure couldn't do what I do if she wasn't there. I'll get her 'under'-whelmed in no time. ;)

Paint Girl-maybe you don't recognize Jet because we used to call him VooDoo. Mom couldn't stand that name(even though it is part of his registered name) and started calling him Jet. It stuck.

Or the other reason for not recognizing him could be that he 'finally' started maturing. He was such an awkward looking giraffe before.

DM-I learned the basics of jumping in college and have always loved it. I just haven't been able to get back into it. It always seemed if I had the time to work at it, I lived where I couldn't find help and when I lived where the option was available, I didn't have the time or $$ to pay for lessons. I didn't want to start a horse myself and not be teaching them the right thing.

Sounds like your evenings will be busy hauling horses around! Fun times though - nice to get those beaties worked a bit! I wish I could hang out with you for a couple of weeks and learn some stuff!

Can't wait to see you all kitted out in your english gear! Make sure to get some pictures of that for us... :-)