Where Do The Days Go?

I feel like I lost this entire week. Two days on the couch and I am back among the living though. Mostly.

I'm off for the weekend, going to a barrel race. I have my fingers crossed I have worked out my bugs and Moon and I can put together a couple of good runs. Now that I know he is not hurting anywhere, I'm a lot more confident pushing him.

This guy is really starting to shape up... 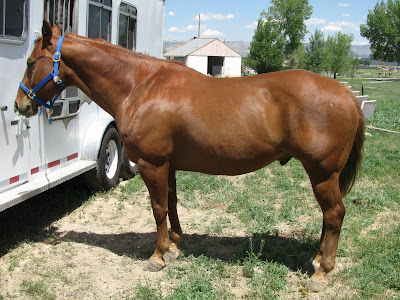 (That picture looked a lot better on the camera. He is long-backed and short-legged, but not posty behind nor does he stand uphill-LOL)

I laid off of him for a couple of weeks because he seemed a little tender on his right knee. Sound on the straight-a-way. Off when working in circles. Mom had told me she was sure he had tweaked his knee just before I picked him up. Mean-ass probably did it when he took after another horse. He is notorious for that.

He seems much stronger now and I started working him back into about 15 minutes of lunging every other day. Mostly walking. Lots of sacking and grooming time. He's very spooky about things dropping around his legs or dragging on the ground. I don't really remember him doing that a couple of years ago when I was working with him, but memory could be failing me.

We are going to work all of the bugs out and then I'll be sending him someone else to put the first few rides on. He's going to try something. It's just his nature. I'd prefer it to be with someone younger, stronger and more in tune with putting the first few rides on a horse. I am sorely out of practice and really don't have a desire to start back on this particular horse. After all, he's 10. He's pretty freaking stout.

But he is turning into the drop-dead gorgeous horse we always knew he was underneath all of the excessive weight he usually carries. His nick name for a couple of years was Fat Albert...Hey, hey, hey....LMAO. I cannot wait to get him back after he has been started. I think after he gets a solid foundation and some miles on him, he is going to be a barrel horse extraordinaire. Short-legged little sucker can mortally fly, he is as quick as a cat and enough power to pull a house over. He may have the ability to put his 1/2 brother, Moon to shame.

Have a wonderful weekend...and keep your fingers crossed that can I remember how to ride my barrel horse.
Posted by BrownEyed Cowgirl at 6:28 PM

I'm pretty sure you've not forgotten how to ride. My guess is those you'll be riding again will wish you had, however. LOL

Have a great time. It sounds like a lot more fun that the weekend I have planned.

Glad you are felling better. Now go show them how its done!

He's gorgeous, reminds me of a bs Paint I use to have. I didn't know what I had at the time, he was just a horse that he was need in of a home and cheap so that my hubby could ride with me.

Kicking myself now for letting him go when the first kiddo came along, it was him or my old Appy and he wasn't going anywhere!

I get enough kicks riding a horse that's a pale shade of green. I definitely would pay someone else for those first rides.

I am glad your back among the living!! Hopefully by now feeling 100% better!! Hope your runs went well this weekend! Definitely with you on letting someone younger and stronger take the first few!