When Your A Bully...

The pity party for Roan Dog is o.v.e.r!!

Last night he decided to take after poor Blue and he ran him all over the corral. Today, Blue is awfully sore. He is a pretty tender-footed horse anyway and getting terroized and ran over the rough corral ground did him in.

So this is how RD spent his day... 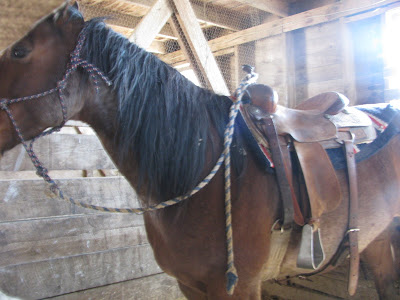 Saddled and standing in a stall.

Yep, that's what bullies get... 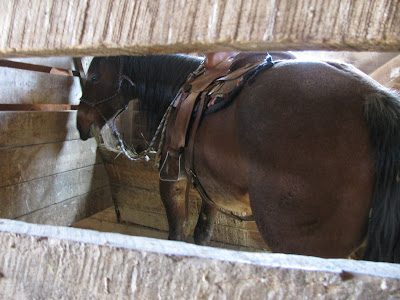 He didn't suffer to badly...some hay in the manger and a bucket of water.

But, this is something this horse needs a lot of and from now on, he is going to get it. Saddling him in the stall was a bit interesting. He does not like confined spaces, nor does he like being alone. To bad!

We had another little come-to-jesus meeting about those front feet, but he let me clean them out. I've come to realize with this horse, you constantly have to alternate between reassuring him and strict discipline. More and more, I realize that the majority of his "issues" are self-made. You can do something with him one time and he is fine. The next time and he blows. Well, he is going to get his chance to become a decent citizen...if he insists on being a complete bronc...I've got the number to a local stock contractor.

On a brighter note, Sandy got his broke-horse brain back. We worked on bending, stopping, backing and crossing over correctly in his turnarounds.

G got her huffy butt saddled and rode.

Electra and Watch got groomed, a leading lesson and their front feet trimmed.

Turk got slapped in his own little corral...Every single mare on the place is in heat and he is one of those geldings that didn't quite get the memo. He keeps everyone on the move trying to convince them he is "the" herd stallion. Take him away from the girls and he is fine. He's going to get added to the roster tomorrow. I'm very anxious to see if getting his teeth worked on fixed the hitch in his lope off.

Bunny got groomed and tomorrow I will start ponying her. She is literally too fat to ride at the moment. She is going to have to lose at least 5o or 70lbs before her wither shows up enough to hold a saddle. Geez-that mare is nothing but blubber.

I wore mom smooth out today...there were no more comments about what wasn't getting done-LOL

I'll have this whole herd on the roster before you know it. Then it will be time to start on the other herd...ohhhh fun!

Posted by BrownEyed Cowgirl at 6:01 PM

Sounds like you are one busy cowgirl these days! It must be interesting to deal with a horse like Roan Dog that is so inconsistent. I hope the little timeouts help him out! I know my horse needs someone to really ride the winter kinks out of him. Not that he's awfully bad, just kind of unwilling at times. Wanna another horse to ride? ;)

You go girl! ;) We'll be bouncing quarters off yer abs before long- and Mom's too! hehehe

Man, I'm tired just reading all that! Sounds like a great day, though - here's to lots of productive ear time :)

Dang girl, when you get done with yours, I have 6 over here that need some attention!! :) Roan Dog might get the message, or he just might just love to be a bucking horse that gets fed really well and gets to do what he loves.....freak out occasionally and toss someone off his back.

We have a mare that is super sensitive and will be a total dork one day and you have to be so soft with her. Then she fell with Mr. Cowboy on her and her attitude totally changed.

I hope the day in solitude helped him out! You are nicer than me. He would have been tied to a pole above his head with no hay or water. :)

Ha I too am tired just from reading that!! You rock girl!!

Like having a barn full of big, unruly kids sometimes, isn't it? Yeah, I sure recognize that Roan Dog attitude, as well as Turk's. They keep us humble, don't they?

Holy shit! Girl, you accomplished a whole lot! You go girl, wish I could harness some of that energy!

Good job on getting more horses in the roster... Like the others said, just reading that post tired me out! I would last 2 or 3 hours out there with you, lol!!!

You go girl! You got alot accomplished~! RD needs to learn and they remember those things I tell ya!

It is already in the 80s here this morning and humid!

You go girl! Love it! So glad to see I'm not the only one dealing with knotheads. You have got to come down here when you're done, we've been doing mustang skiing lately.
But I guess you're having your own fun. Enjoy wearing your mom out, lol. Give her hell!!

Give 'em all hell! Yahoo!

I am relieved to see someone get after her horses when they need it. I use phrases like "ripped off her nose" on my blog to talk about getting after a naughty horse and I worry someone will contact PETA.
Ride 'em cowgirl!

Sounds like you are back in business!!
Glad momma is a little quieter on the homefront. :)