To Geld Or Not To Geld

Do you see this adorable face? 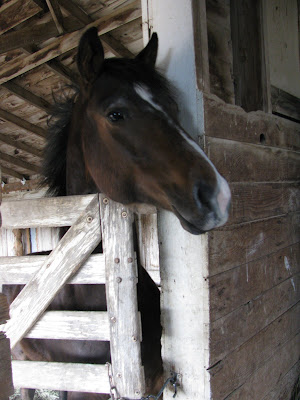 All winter I have waffled back and forth as to whether I wanted to geld Shooter or not. I have really been leaning toward NOT gelding him right away. Let me tell you, this would be the first time THAT thought has ever crossed my mind. Only one horse on this place has ever made it to the fall of his yearling year intact. As soon as the temps made it possible he was hauled to the vet and received his brain surgery. I don't know what my brother was thinking.;)Looking over the herd, there is not one single horse that we ever regretted gelding. We just are not "stallion" people.

But there has always been something a whole lot special about Shooter. I just hated the thought of gelding him and then regretting it. As a stud prospect, he is perfect. He is not related to any of our mares. Yet he possessed the exact bloodlines we want to cross them with. Also, his mother has outproduced herself every single time and Shooter is the last colt she will have. And well, he is going to be an absolutely gorgeous horse. The only thing I didn't think was perfect about him is the fact that he is a bit long in the back. But looking at the mares that I would potentially breed to him, that would be compensated for.

Well, guess what...he has an appointment with the veterinarian on Monday. My sweet, well-mannered colt has turned into a screaming monster. He got his cahones and he is letting the whole world know he is now a stallion. I was suddenly reminded of why everything is gelded around here. I HATE young stallions. They are the biggest pain in the butt things to have around EVER! I have weighted the pros and the cons and I don't want to raise a stallion. I want a nice gelding. So brain surgery is scheduled and I can't wait.

I had to make a short day of working horses today. I am on my way to the ranch to get things arranged so I can bring my bred-mare into town. In case you are wondering about the running tally on what got done that last few days, I'm trying to keep track of what's been done and who is doing what. Seems if I don't write it down somewhere, I forget by the next morning. Must be my age showing-LOL!

G got her "broke-horse" brain back... 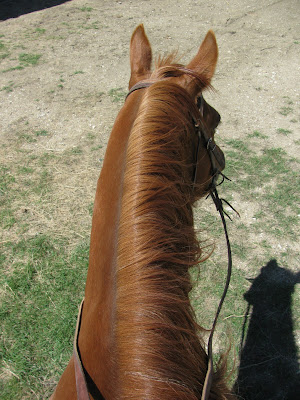 She is a firecracker of a little mare, but darn nice when she hits her stride.

Turk was awesome today. Getting his teeth done was just the ticket. He walked out, jogged and loped off without so much as a swish of his tail. Before, he had a difficult time holding a jog and every time you asked him to lope, he rung his tail and kicked up in the back. I need to take him to the arena and work on his right lead. He just cannot seem to pick it up, so some roll-backs off the fence are in order.

VooDoo, the monstrous 4y/o got groomed up, sacked out and got the little bareback pad strapped to him while he ate his grain. He needs so much work. He is being a PITA about his feet and he has one really long front foot that is in desperate need of a trim. I am going to have to use a foot hobble to teach him to stand on three legs, cause he is so tall that when I bend to pick that foot up, he just steps over the top of me. I have no doubt he would do a happy dance on me if I pushed the issue. Ohhh Mikey...Wanna trade?

Boon-the little black mare we bought back last fall is a changed woman. No longer is she unfriendly toward people. Rather, she has decided that pocket pony status is for her. She still grinds her teeth occasionally, but you can tell it is more from habit than stress or nervousness. It's time to start saddling her. She is broke, but we just weren't too sure how broke. I'm just going to start her all over again to make sure there are no holes.

Roan Dog got the saddling treatment again. At least today, I did not feel the need to softly chant "Please do not kill me...please do not kill me", while saddling him in the stall. I even took him out of the stall to unsaddle him and trim his hind feet. He still won't let me pick up those front feet unless he is in the stall, but at least he isn't trying to fall down to avoid it anymore. Mom came tippy-toeing in the barn while I was working with him and I told her to stop acting like that around him. He knows when people are acting overly nervous around him and that makes him think he has something to worry about.

And these are the best dogs...ever... 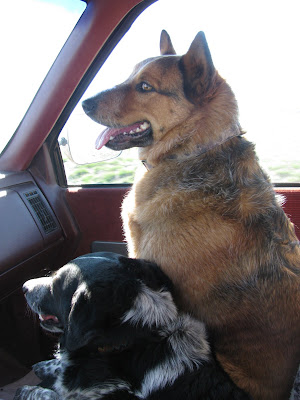 There is not a move I make that I do not have these two keeping up with me. Where I go, they go. They just make my day!

And now I am off again...I am hoping to get my mare and the pony, Mighty Mouse moved to town tomorrow. It won't be long and I will be on foal watch again.
Posted by BrownEyed Cowgirl at 4:37 PM

He's a beautiful guy, but I'd be doin' the snip, snip thing too. The economy is just so bad...breeding anything that you are contemplating selling is just flushing money down the toilet (IMHO). If he had kept the gelding mentality as a stud colt, I would have left him a stud for a while to see what else would develop...

PS...everything on our place is a gelding...except for Catnip the jennet donkey!

Brain surgery...lol!!! The vet that I worked for always called it that....
I can understand your hesitation, but he will be much easier to get along with (at least in his early years) as a snipped boy, rather than an intact one, right?

Glad you have been able to get out there and work those ponies. I want to come spend the summer out at your place. My kidlets would be free labor...I mean good helpers!!! I promise!! :)

Looks like you have been busy. Way to go on getting ALL THAT done!

Busy, busy, busy!!! I'm starting to wonder if you ever get resting time LOL!!! I am glad you are getting so much accomplished!!

Girl you crack me up~brain surgery! ROTFL!!! But I couldn't agree more! I'm not a stallion person either! I LOVE Shooter, but in the long run I think you'll be happy with your decision! Something about them things dropping makes then looney! Good luck!

Great horse work again, girl! You're making the rest of us look bad!

Horses and dogs...dogs and horses! Life would just not be right without these. I just cannot imagine! I love how my dog goes everywhere I go...makes life so much better!
I so agree about the young studmuffins!! Cut em...cut em all!!! Make em a good horse!!
Come to think of it...I can think of more than just a few men who would benefit from that as well...

So nice to have riding weather! And I love the "brain surgery" - ain't it the truth, though. Another busy day for you, sounds like progress :)

I get tired just reading about what all you're up to.

I think you'll be glad you decided on the brain surgery.

Maybe I need to switch to your brand of coffee....

We had mass gelding day this week at our house--all the yearlings got de-nutted.

Too bad you couldn't send him to the back pasture with some mare magazines and start up a little sperm bank. Then you'd have breeding ability and brains.

I had such a frustrating day that I cannot even sleep...and I'm sunburnt. The sunscreen wore off long before I was done working and I forgot to take it with me. I didn't think I would be at the ranch as long as I was.

You all are right. I think a bit of the wishful thinking was sentimental. Shooter is Woofer's last foal. I doubt I will ever be able to re-purchase the only mare the old girl ever produced. So, it's kinda sad that my old girl's line stops with Shooter. At least as far as my family's interest is concerned.

It ended up being a mathmatical issue. Woofer was born on my ranch but has been mine for 23 years. As a gelding, Shooter could be with me just as long. I'm 39. That means I would be almost 60 before he is ready to retire. Hmmm. As much as I admire June Holman, I don't think I will be as competetive as she is in her 60's. Gee...I better get cracking at getting competitive. If these next 20 years go as fast as the last 20 have, I'm in trouble-LOL

He is a handsome devil, but I am with ya, the attitude sucks!! Maybe more men should be gelded? Hee hee!! I am glad you got time to get out and work those horses. I would love to live near ya. To have someone to ride with!

and a GREAT stallion makes a PHENOMENAL gelding!!!!!

and that's why they call it brain surgery :)

after reading this i am tempted to go blog about my first homebred mini donkey foal, Moses, and the trials and tribulations his buyers had because they did NOT geld when i told them to do it... and he sucked those little puppies back up and they were waiting for them to come back down on their own to avoid the expense - well, one did and one didn't. and his attitude turned into BAD-ITUDE big time. so finally they bit the bullet and paid the big bucks and it's been less than a month and he is a little sweetie again.

but i stand by my advice... he DID have a pair when he left here and they SHOULD have done it right away!!!!!