Yayyy!! Winter is done and gone here. Oh sure, we may get a few cooler days and maybe even one more shot of snow (although, it's unlikely), but for all intents and purposes....Winter has come and gone. The geldings are starting to blow their winter hair and I pulled and packed away my tank heaters. :-D.

It took almost a week of high 50's for the snow and ice to disappear. Of course, that meant days and days of mud...but I was so happy to see the snow and ice go away, I didn't even care. One breezy day dried out the top layer around here well enough for me to get out the 4-wheeler and drag. I spent 2 days dragging the ruts out of the driveway and was finally able to get the little open area on the east side drug too. That helped it dry out even more. A 2nd drag over it and it's ready to start working horses. Or so I thought anyway, until I got Belle out for some longing and she was slipping and sliding. Too much poop mixed in that ground. It's dry on top...slippy as snot underneath.

I had started to drag my arena area but ran into some wet spots, so I stopped. But I took Belle out there and even though it was pretty soft, it wasn't slippery, so that is where she got worked. Belle is starting to come around. Lots less shouldering in and trying to run over the top of me, but I still have to really pay attention when I am working her because every so often she will lock up and try to turn her butt to me. I don't think she is just posturing either. She has never kicked out at me, but more than likely that is because I am prepared for her and don't give her the opportunity. I keep a dressage whip in hand when I am dealing with her. She learned to respect that awhile back as we had to have a couple of 'discussions' about getting out of the gate when I am putting hay out. She's such a little shit. Follows me around like a puppy dog, with those big, soft eyes of hers...But she is pretty dang quick to try to assert her dominance if she doesn't want to do something. Only time will tell just how deep her petulant streak runs.

I fully expected Frosty to start freaking out because Moon was crowhopping around and I was scrambling to gather up rein, grab some mane and trying to decide whether to throw Frosty's leadrope away or not, but he just shied away and stopped. When did the buckskin horse get so responsible? LOL.

I have been paying a little closer attention to The American Rodeo this year. I had a couple of friends qualify, but they didn't make it to the Semi-Finals. :-(. I did however, find out that my Frenchie mare had a paternal 1/2 sister running there this year...

She just barely missed out on making the Semi-Finals. Dang it!

Frenchie also had a maternal 1/2 brother competing at The American, in the team roping. They made it to the Semi-Finals, but was just one hole out of making it to the Finals.... 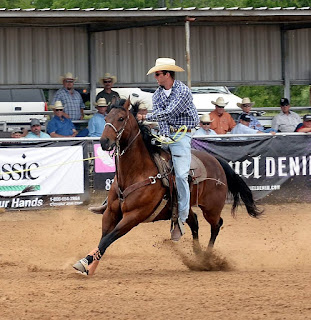 One thing about it, I won't have to worry about little Flashy amounting to something. His family has proven they are more than capable of being top horses, in several events; barrels, steer wrestling, and both ends of the team roping. I think I need to raise his price tag again. ;-)

Posted by BrownEyed Cowgirl at 9:56 PM

Oh I wish winter was over. Feels like spring but being only February it sure could winter again anytime.

Haha Moon what a character, maybe you should ride Frosty and pony Moon.

Winter has been so mild here it feels like it is over too, but this is Alberta, and it ain't over till well till its over lol. Moon sure is a character!