The other night I had The Racer's Edge, that barrel racing show with Dena Kirkpatrick, on and was only about 1/2 listening to the show...until DK started working with the gal on the barrel pattern. I always like listening to DK. She's all about working on the balance between helping the horse and letting the horse work.

She started out talking about hand placement on the rein. The lady she was working with was having problems with bringing her hand across her horse's neck like she was neck reining him and inadvertently cranking his head to the outside. I have the opposite problem, in that I often want to reach too far down the inside rein and end up getting too much shape, at the same time shutting Moon down too much to flow through the turn. I don't seem to have the same problem with Frosty, nor did I have it with Spooks. I'm pretty dang sure the root of the problem with Moon has a lot to do with his running/rate style. I have really come to realize that I much prefer a more push-style horse. One that I can feel it's butt drop when it's getting ready for the turn. Feeling that hip drop is my cue to drive my horse into the turn. I don't get that feeling with Moon...and I never will. Moon has, what I call...The Body Drop...rate style. He doesn't flex in the back, his hip doesn't drop...His WHOLE body drops and it just feels like he gets faster.

Realizing that Moon is never going to give me the feeling in his turns that works for me, I continue to soul search about spending much time trying to compete on him again. However, it doesn't keep me from continuing to work with him and see what else I can learn. After all, I am still holding onto hope that I will be able to run Shooter on the barrels...and Shooter is going to have an identical running style as his brother Moon. For some odd reason, I relish the thought of running Shooter. He has a fluidity to him that Moon lacks and Shooter isn't quite as athletic as Moon is.

Back to the show;

DK was showing this lady proper hand placement for a run. She found the center of the rein and then slide each hand down the rein until they were about 6-8 inches apart. About the width of the horse's shoulders. Then she rode into the turn, went to one hand and circled the barrel. Coming out of the barrel, she stopped and said...'Now, when you want to go back to 2 hands, don't try to just grab the spot you 'thought' you had your hand on before. Grab for the center of the rein and slide your hand back into position'. When DK reached up and grabbed the center of the rein, her hand was now touching her other hand and she slid it from the center point back into it's previous position. To me, it looked a whole lot easier than trying to remember not to grab too far down or look for that little piece of colored tape I used to try to use. LOL. Horn to center..slide...and you're set. I used it in practice and it sure feels a lot easier. It will still take some time to develop the muscle memory, but when something feels more natural, muscle memory is easy to develop.

The 2nd little bit of interesting information came out when the gal was riding her horse around the turn, using the hand placement that DK showed her, when DK started telling her to, 'Stop. Stop....I see a problem here' and she ran over to the barrel to show the lady what she was seeing. Once the rider got to the backside of the turn, she stopped riding her horse forward through the turn and allowed the barrel to get in front of her leg. I was like...'Whhaaaa?? What the heck is DK talking about?'. I watched, re-wound the t.v. and re-watched DK explaining about keeping the barrel behind the leg and I kind of got it...but not really. So I did a little internet searching and found this clip of DK fully explaining the theory of keeping the barrel behind the leg....

I watched it a couple of times and thought, 'Okay...That's not too hard' and took Moon out to practice the maneuver.

And I was just doing the exercise at a walk.

It was a very strange and uncomfortable feeling pushing Moon forward enough to keep the barrel behind my leg. It felt like I had A LOT of horse sticking out in front of the turn. LOL.

I can see I have a lot of work to do to correct the problem spots.

Out of curiosity, I applied the same exercise to Frosty. I was mainly curious to see if the way I train a horse is the problem...or if the problem is just with Moon. Well...The first couple trips around, Frosty was wanting to point his shoulder at the barrel going into the turn...But once I corrected him a couple of times, he just got soft and began traveling into the turn and around the barrel exactly like DK showed. So I guess the majority of the problem with Moon is just between me and him and not an overall training flaw.

The 3rd thing I have been working on, particularly with Moon, is unlocking my knees. I'm not sure when, or why I started stiffening my knees, but I since I have started riding Moon again, I have sure noticed that I do. It's a bad habit because it causes LOTS of other issues; lower legs don't work, hips tilt back and you don't get set down, flat in your saddle.

Everybody likes to make fun of the girls whose butts are a foot out of the saddle... 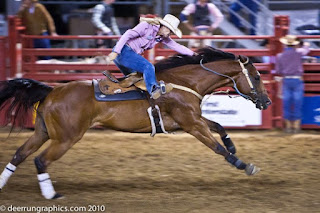 But I'm realizing that regardless of what people think it looks like...When your knees are relaxed and you can use your whole leg...butts coming out of the saddle happens. You cannot just melt into the saddle when you are preparing for turns if your knees are stiff. Stiff knees could very well be why Moon almost tea-kettled me so many times at the 2nd barrel. Or almost getting tea-kettled numerous times is what caused my stiff knee problem. LOL. Either way...I spend a lot of time reminding myself to ride with a loose leg and a relaxed knee...Like when I'm riding a just started horse.

Posted by BrownEyed Cowgirl at 12:09 AM

Interesting stuff! I'm not a barrel racer, but I hope someday one of my nieces will be. Then I can apply all the stuff I learn on your blog!

Wow so much in one entry. Always something to learn. I always think its interesting how different I ride different horses.

I think, too, that it takes a lot of trust to run my horse up into the turn far enough, trust that she will in fact turn. I am struggling on the first barrel with this. My horse is super ratey and turny, so it is so important for me to get the start of my turn right, to really push her up into the turns deep enough. She never hits barrels, but the turn is slow when I don't give her enough room. I run the Lynn McKenzie way, so this is something I've always known but STILL work on. WyoFaith