Where Oh Where Does The Time Go?

At first it really wasn't my intention to leave the blog for so long. Then I kinda thought about just letting it go indefinitely. Then I got to missing the catharsis of writing.

So, just a quick synopsis of what's been going on around the place the last couple of months...

- MH and I got ALL of the spring cleaning done at both properties.

- The rental house is under remodel.

- My pasture was finally plowed and worked.

- Finally saw the conclusion of a PITA business.

- I was able to purchase another Tiny Watch granddaughter.

And probably the most important...Beretta had a healthy baby boy... 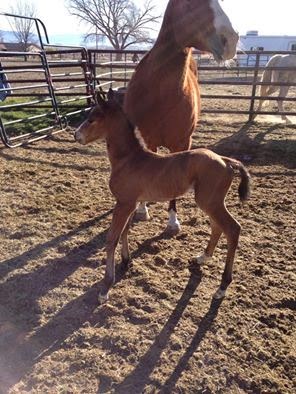 I'm calling him Ruger. He is an absolute doll and everything I had hoped this nick would produce. He is perfectly proportioned, very typey and has a baby doll head with a big, bright eye. Can't ask for more than that. Of course, I'm greedy...What I was really hoping for was a filly...particularly a buckskin filly. Beretta was the ONLY mare, out of 30, that produced a non-graying bay. Go figure! LOL. Me and my bay/brown horses. Hahahahahaha.

Unfortunately, the fact that Ruger is a boy means he will be put up for sale at weaning time. From a business standpoint it just makes sense to market the colts. I love my babies, but I just cannot continue to collect 'geldings'. It doesn't fit with what I want to do over the next 15 years.

It may be a slightly different story when the Tiny Watch mares produce colts. Those mares are going to be bred to very high-end stallions and they very well may produce stallion prospects. Not that Mags isn't a high-end stallion, or capable of producing stallion prospects...I just think Beretta is going to produce what her family has always produced...exceptionally, nice geldings. It's not a slight to her broodmare capacity. If anything it makes her more valuable (IMO) because you just know what you are going to get. No waffling around wondering if you should cut this one or not. Just cut em and use em. That is where their talent lies.

I've already had a little interest in Ruger, but I priced him high (5K). That knocked a couple of tire-kickers out right away. I'll negotiate his price to the right home...someone who has proven they have the capacity to raise/start him right and then possibly futurity him, but he's not getting dumped on the market just because he's a colt and not the filly I had hoped for. Mags' babies are just starting to prove themselves, so if I have to keep Ruger until he's a long 2y/o, then so be it. He'll be even more valuable in a couple of years. :-D.

The rest of the horses are doing well. The other mares are looking fabulous and ready to breed. Frenchie is going to SD to get turned out with our Oklahoma Star-bred stallion. Miss is going in to get ultrasounded to see where she is at in her cycle. She will be AIed to Letta Hank Do It. And Sassy will soon be going to Firewater Fooler for a live cover. If the name 'Sassy' sounds familiar...She would be Cindy D.'s mare. :-). We did a little trading. As sure as I was that Beretta would nick well with FF, I know beyond a shadow of a doubt how well the Colonel Freckles bloodline crosses on him and I wouldn't mind having a palomino filly in my herd. ;-). So instead of breeding Beretta back to FF this year, I'll be breeding Sassy and once again crossing my fingers for a colorful FILLY!! The new Tiny Watch mare won't be bred this year. I was planning on putting her in with the Oklahoma Star stud too, but when it comes to pasture breeding, he's got a weird habit of falling in love with the first mare that comes in heat and won't breed anything else for several months (hence our June/Oct and June/Sept foaling problems a few years ago). My brother and I discussed it and truth is, I'm more interested in getting a foal by him, out of Frenchie, than I am in the Tiny Watch cross. Until we can all get together at the place to hand-breed the mares we want bred to this stallion, it's better to just put him with one mare and let him do his job. In actuality, the 2nd Tiny Watch mare didn't really fit into my plans this year anyway. She just happened to come up for sale at the wrong time, but I didn't want to not buy her and then regret it.

I'm starting to get everyone else legged back up. Moon and Frosty are huffing and puffing their bellies away. Jet and Shooter act like they haven't missed a day and LJ is a little wild man. He and my 3y/o filly, Belle are quite the little fireballs. LOL. The swelling in Shooter's leg is f.i.n.a.l.l.y. starting to come down. After all of the attempted sweating, that didn't do a thing, now just putting the BOT boot on him for a couple of hours gets a good sweat going. The kind-of weird thing is, when Shooter's leg was big and hard as a rock, he was sound. Now that the swelling is softening and actually starting to break up, he is much more sensitive on that leg...So I have to take it easy on him. Luckily, he is a very low-key horse.

In a nutshell, that's about everything that has been going on around here. Busy, busy, busy...but getting so much done. I knew those 2 years of rodeoing and 2 winters in AZ took their toll on the progress around here, but there for a little bit, I didn't think I was ever going to get caught back up, much less get ahead this year. Thankfully, MH has done a tremendous amount of work around the yard when he is home on days off. I don't even think he realizes how much it helps, but everything he did made a huge dent in the 'to do' list. :-).


Posted by BrownEyed Cowgirl at 1:24 PM

I'm glad you didn't let your blog go. I enjoy reading your blog.

Glad you are keeping the blog, I too have some trouble keeping up with mine but U sure don't want to give it up entirely. Congrats on Beretta's little fella, sounds like you have a good plan for him and all of your horses! Looking forward to seeing what you get next spring

So glad your keeping this alive- yours is one of the few blogs I read and I enjoy it tremendously!
WyoFaith

Yup keep it going! If you don't, blogs get taken over by spammers- both my sisters had that happen. Ruger is a cute fella, remember- you can never post too many foal pics.....
Hope Shooter comes sound for you.