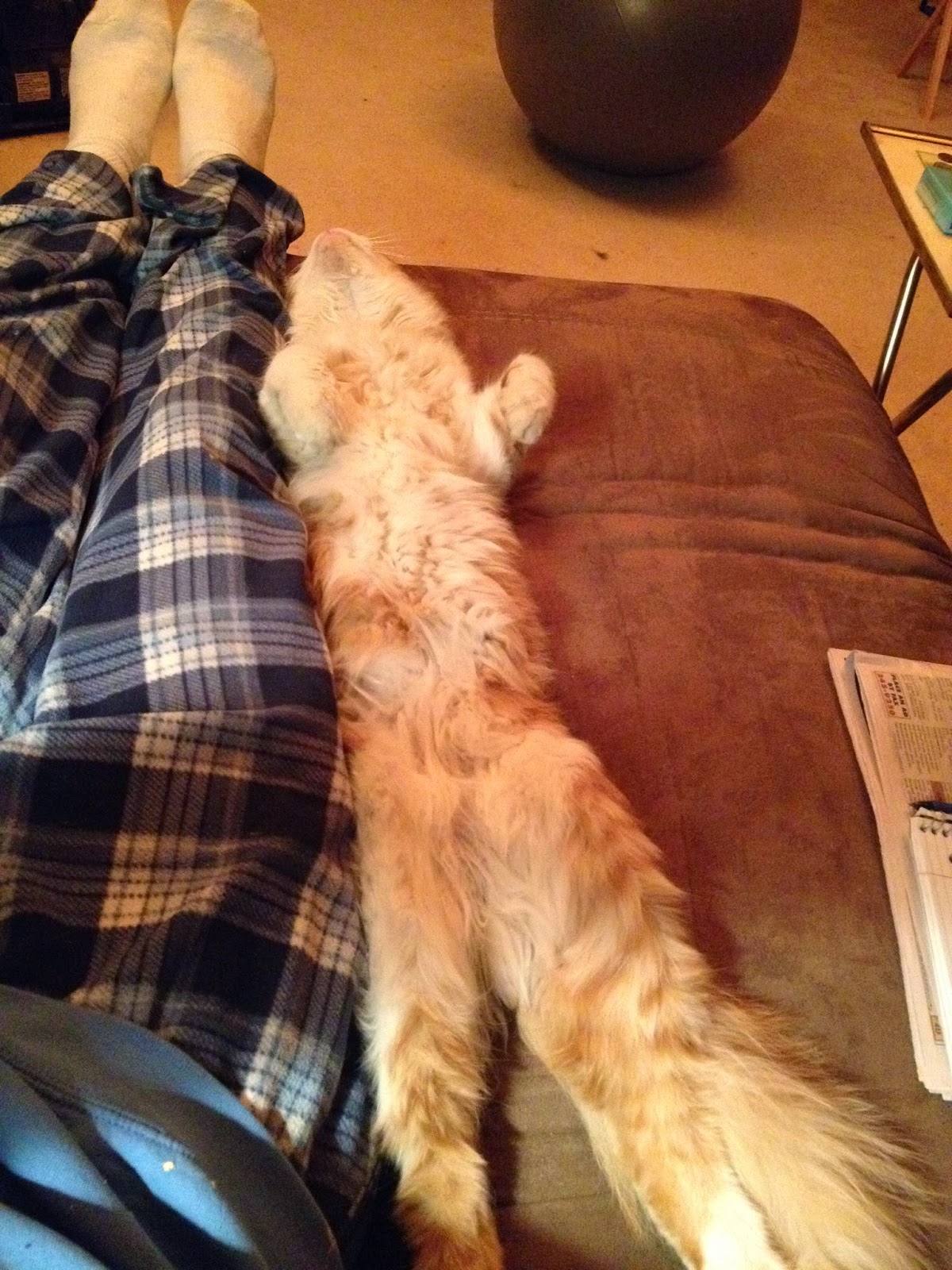 If only my aching body would let me sleep this hard!! And I don't really know why I am so sore. I've been spending a fair amount of time in the skidsteer. I suppose it is the 9,000 times I have to get in and out of it throughout the day. LOL

I got the rocks picked in the pasture. Oh man...If nothing else...This land has some cool rocks. Tons of fossils in them. Mostly shells, but I have found a few with leaf impressions. I'll try to remember to get some pics. I've been working on the rock-picking every since the farmer first worked up my pasture. I was picking a bucket load of them a day for almost 2 weeks. I barely got that done and the rain came and then as soon as the ground got dry enough so I could take the skidsteer back out there, the farmer calls and says he's coming to rework the ground. CRAP!!

I still had to dig all of the silt out of the irrigation headgates. So that evening I worked long into the night cleaning out the headgates. I felt like I was making more of a mess of it than doing anything beneficial, but after spending another 6 hours on it the next day, it finally started to look less of a mess and more like it should. I bet I dug out and spread 1,000 buckets of silt. I was still working on it when the farmer showed up to work the field. He came with a spring harrow first and saved me a ton of work by dragging the silt that was still built up at the headgates. After he did that, I went back to work with the skidsteer and bucketed and spread another 1,000 loads. Ugghhh!!!

When the farmer came back with his roller harrow for the final round, he stopped and took a look. I still had some leveling to do, but he thought that I had taken the majority of the build up down to the right level and when he comes back with his land planer, he should be able to drag the last of the 'hump' out. 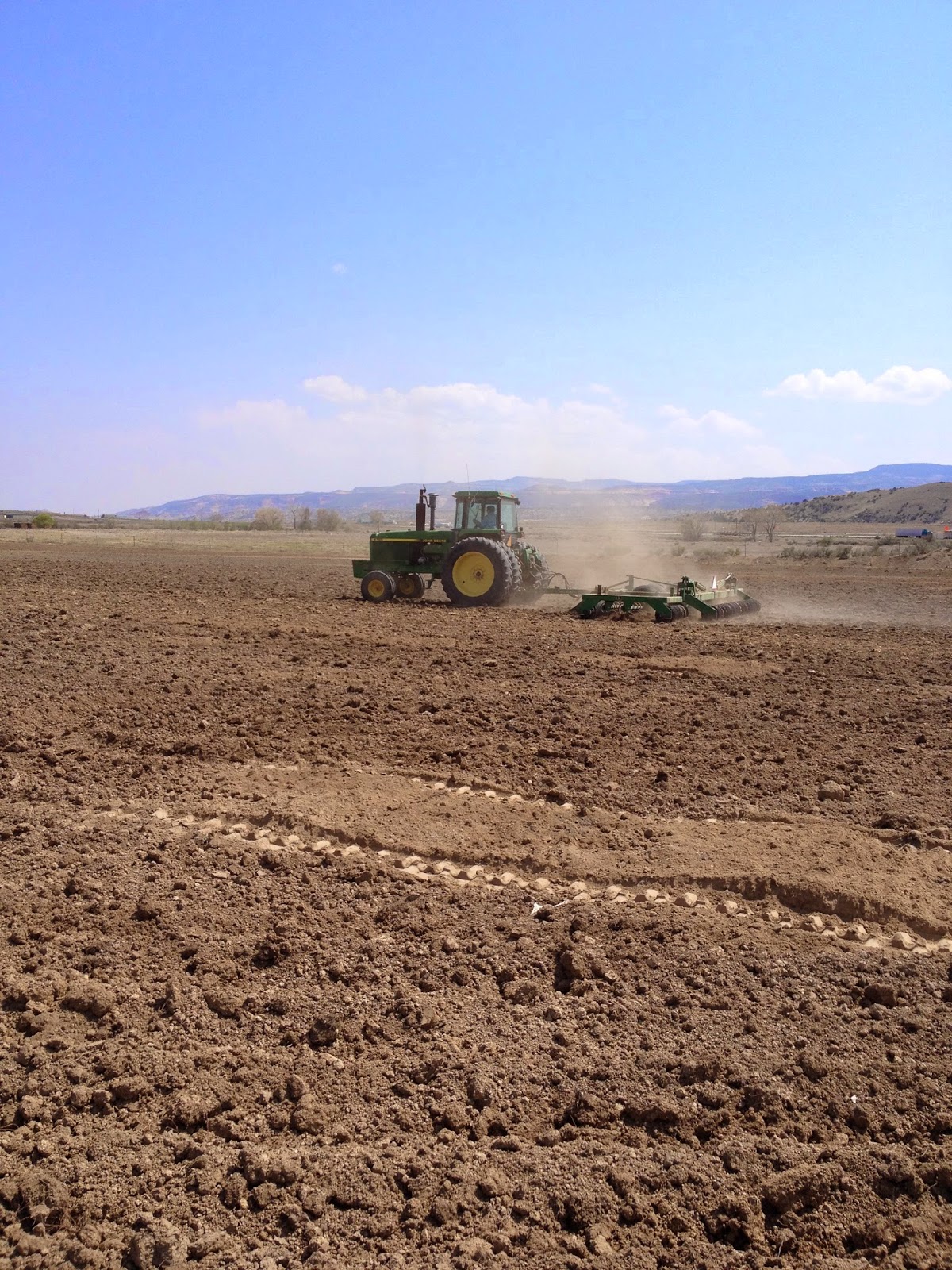 Unfortunately, his 2nd round of farming produced another crop of rocks to pick. So I started walking the field and making rock piles again. Now I get to run around with the skidsteer and pick up all of those rock piles. Again!!

The good news is...this is the last round. The ground worked up really nicely this time. I thought, anyway. The farmer isn't a 100% satisfied. He would really like to leave it set through another rain...But we are out of time. Around here, planting pretty much needs to be done by no later than the first week in May, or it gets too hot.

The farmer will hit the pasture with the land planer on Thursday morning, Thursday afternoon, I'll lay new irrigation pipe and then the farmer can come in and crease the field and lay in the water return lines and broadcast seed. After that, I'm on my own with the watering.

I cannot even begin to tell you how happy it makes me to be getting this pasture planted this year. I really didn't know I would have so much work to do to help with the prep...but it had to be done.

In between rock picking and dirt work, I went and got a couple loads of hay... 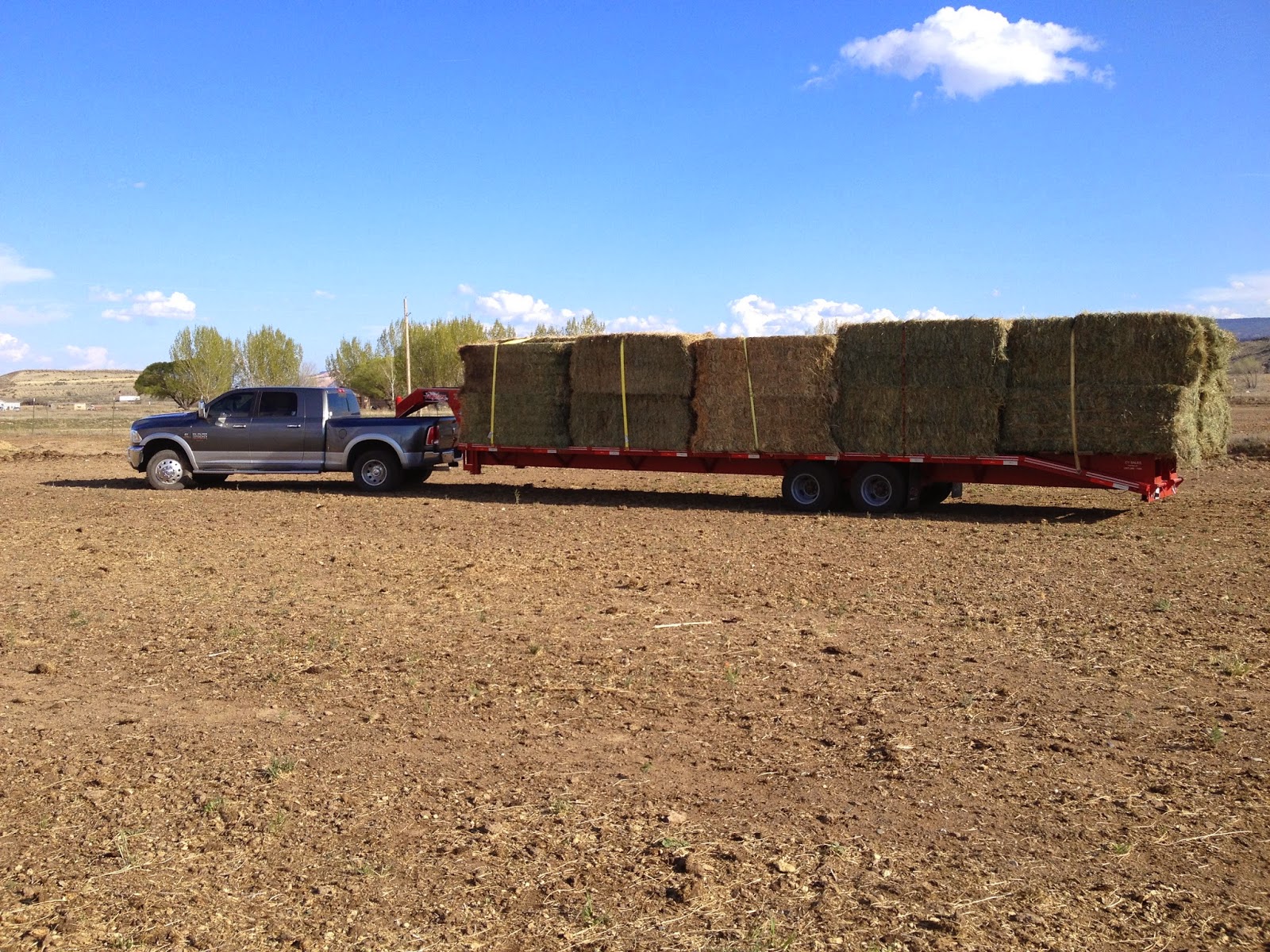 Is that a bad-ass flat-bed or what?

I was a little startled when the smaller flat-bed we had went down the road with the black dually. I didn't know THAT was part of the deal!! And I asked my husband, 'Just how the hell am I supposed to move hay now?'. Grrrrr!!

Well, he disappeared for a day and came home with this bad boy. I can haul some HAY now!!. The bales are actually stacked 3 wide on this trailer, so at the very least, I can move 30 at time. I got this load unloaded and stacked and went back for a 2nd load. We got 35 on that load. Now, I just have to find the time and energy to go load those 200 small squares I bought and get them home. :-/. Yeesh!!

As you can probably tell, riding hasn't made the list of 'must do's' these last few days. I doubt I will get anything rode this week and next week, I'm taking mares back to SD. I thought I might take a gelding or two to ride while I am there, but that isn't going to work either. After I get the mares settled, I have to make a little detour to get a fuel tank installed on my Dodge. LOVE my Dodge, but Damn, these trucks have tiny fuel tanks. So MH had a bulk tank custom made for me. :-). LOVE that man!!

I also, finally managed to get Flashy home!!! 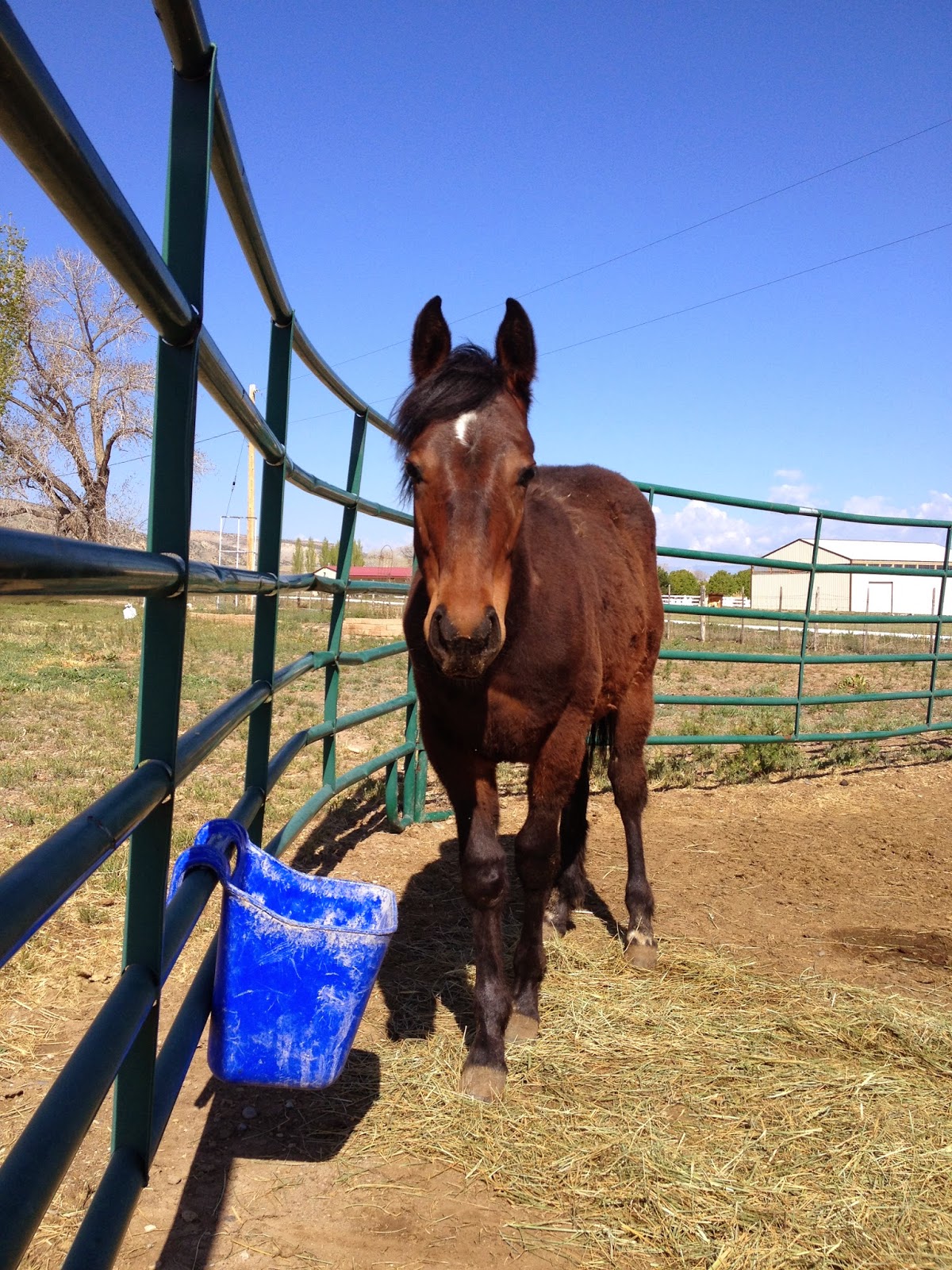 You wouldn't think that it would be that difficult to make that happen. After all, he was only next door. LOL. But when the farming started, I had to pull all of the horses up, so all of my pens were full. Then the weather changed and blah, blah, blah!! Finally, the vet was home one day and I texted him and said, 'Let's get these horses moved!!'...So we did. We loaded his mare and yearling filly up and hauled them to his clinic and Flashy came home.

He whinnied a little for his girlfriends, but quickly settled in. Truth is, I think he is glad to be alone. That yearling filly wasn't mean, per say, but she was quite bossy with him. As full of himself as Flashy was, it didn't hurt him to have someone get and keep the upper hand on him for awhile. He's a lot more respectful now. But, those situations come with consequences. He's pretty crabby about his feed. He's already coming out of it, I can go in and brush him while he's eating his hay, but I leave him alone when he has his grain. He's shedding out his Yak-hair and losing his pot belly. Hopefully, he will take off growing now too. 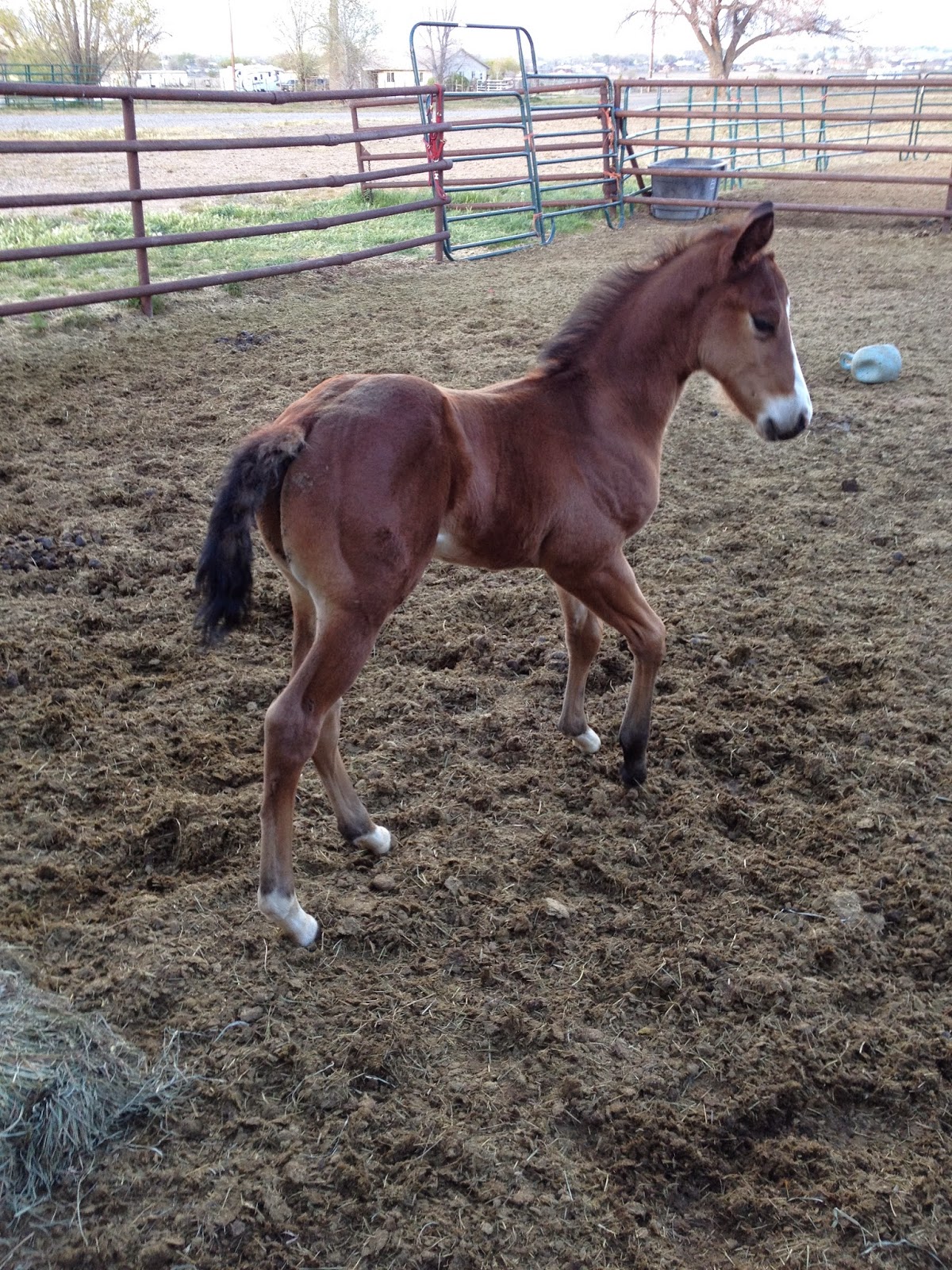 Ruger is turning into a beast! Three weeks old and hola mola, he is just a little powerhouse.

This WAS a good picture, until he stepped forward to sniff the cat. LOL.... 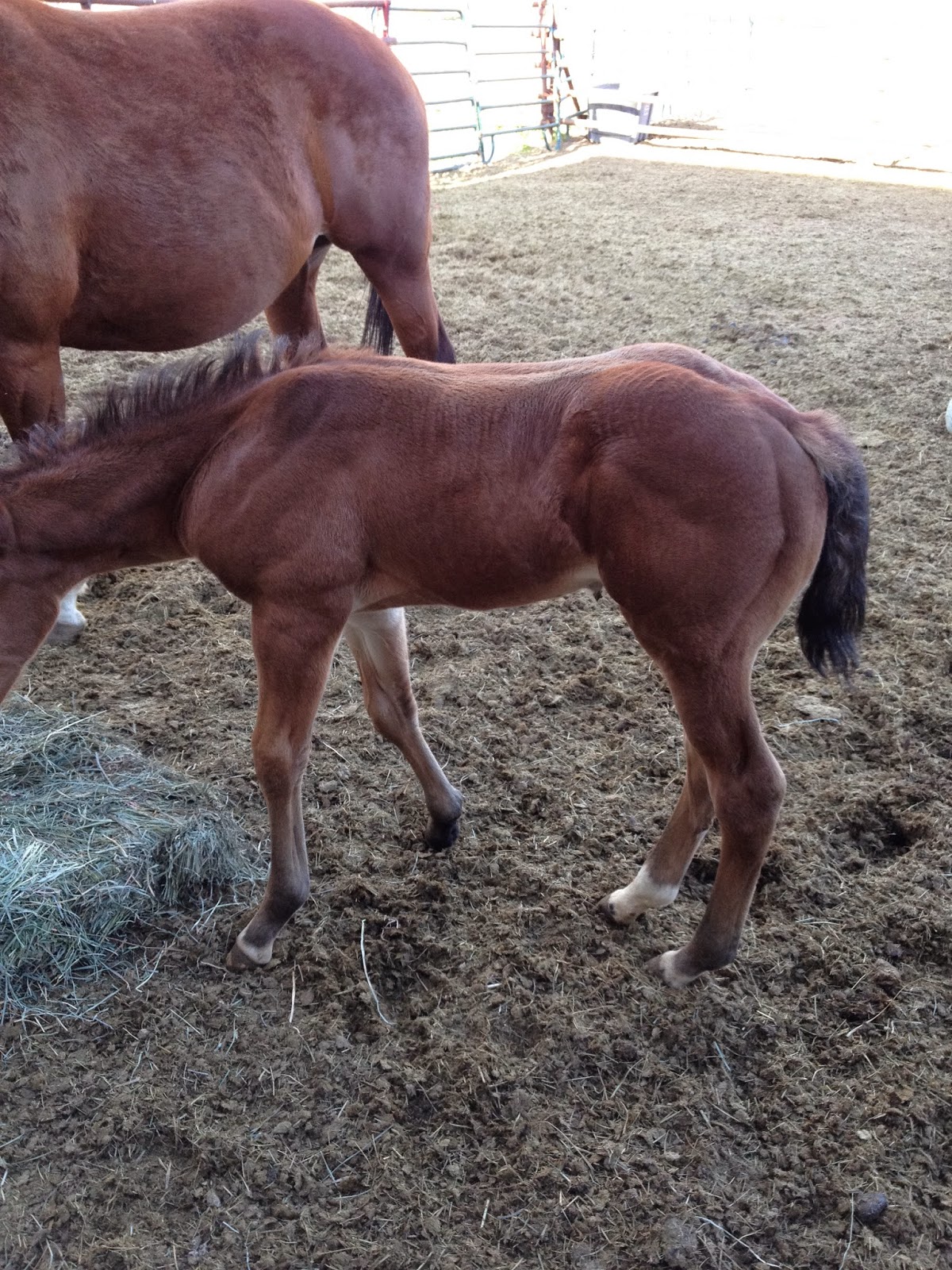 I've got to make a decision here in the next couple of days about whether I want the vet to come give him a shot that will help relax his tendons. Ruger was pretty over-at-the-knee when he was born, but got mostly straight in the first week. Now, one day he is totally straight and the next he is buckling over at the knee again. It's always worse in the evenings. I noticed that a few of Mags' foals were over at the knee the first month, but all were straight after that. That is the only reason I didn't have the vet give him the shot right away. Now, I'm thinking, I should probably just have him give him the shot and then I don't have to think about it anymore. I didn't even know there was such a shot that you could give them until last year with Flash. The vet gave him the shot right away because poor Flash couldn't even straighten his legs and three days later, he was up and going.

I did talk to my vet a little about possible mineral imbalance/lack of minerals and he didn't think it was my feeding program. I mean, you can't really go wrong with good grass hay and a loose mineral and a loose salt supplements. But this year, I will be feeding the mares a light alfalfa mix. It's only about 30% alfalfa, which is about right when you are free-feeding. Plus...After this summer...There will be real grass for the girls too. Yaayyyy!!!

Posted by BrownEyed Cowgirl at 11:11 PM

That's a lot of work, but so worth it in the long run. Just curious, what id the shot the vet gives for that? I used to give a 1 cc vitamin E/selenium shot, and follow it 10 days later with another one. Once I started feeding Hoffman's minerals I never had the problem again.

I believe it is Tetracycline.

I probably should have had the vet give him the shot in the first week, but he was such a leggy foal that being over at the knee seemed perfectly normal. Now that he is coming up on a month and it is still presenting...probably better give him the shot. It's effectiveness diminishes the older the foal gets and they won't give it after 60 days.

Wow - you have been busy. Glad the pastures are getting all worked up and hopefully planted. I think of all the old time farmers that had to pick and haul rocks by hand! Sheesh.

And, I love that cat - what a funny guy!