This Is What It Is All About

What an absolutely glorious weekend of barrel racing in Utah! Hanging out with good people, visiting about horses and bloodlines, getting to ride in a beautiful facility and having a little competitive fun.

This was a big weekend for Frosty. I knew I would be able to get 4 runs in on him and I have been anticipating being able to see how well he works in a small indoor arena, because....

I qualified for Finals!!!

Of course, on Saturday, the big joke was...Was I going to get a time...Or a score?

It didn't take long for the story of Frosty bucking me off in Arizona to make the rounds...and why not?...It's a pretty funny story. Although, I did request that I not be scored on the actual bronc ride (should it happen again). I just wanted my landing to be judged. LOL. :-D

Frosty's first run on Saturday was okay. He picked up the wrong lead when he left for the first barrel and didn't get his hind lead switched before the turn, so he was really hopping when he came out of the turn. The rest of the run was good though....Just super slow. He was almost 3 seconds off of the fast time again.

For the 2nd run, I picked up my bat and gave him a little swat on the butt when he left the gate and he picked up the correct lead. That run was smoother and we shaved some time off. I could feel that Frosty was much more confident on the 2nd run and I have to say, I am so in love with the way this horse turns a barrel.... 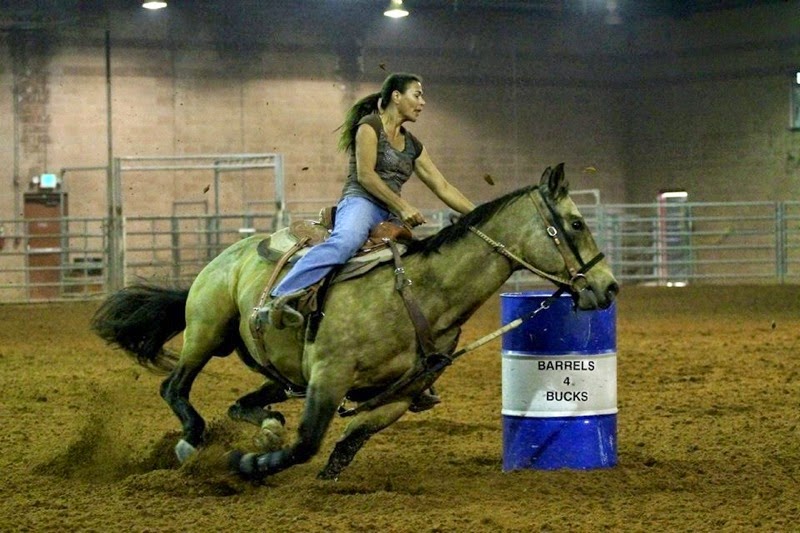 His form is spot on. He's pulling that inside hind leg up, he's shaped and he just flows through the turns. He is just so easy...and fun to ride.


In spite of the still-slow times, I was so happy with how Frosty worked on Saturday, that on Sunday I kinda felt bad that I was running him twice again. I almost went up and asked for my first time to be carried over to the 2nd race, but I checked myself. Frosty is definitely not running hard enough to actually wear himself out and I realize that I did make a mistake with Moon when I was seasoning him. My mom was so adamant that a horse should only have to make one run at an event, that I never ran Moon more than once a day. But as I have been around other people and observed....Many of the good trainers DO run their horses more than once a day, especially their green horses and from what I have observed is that there are no ill effects. In fact, instead of making a horse more hot (which was my mother's opinion), they actually seem to stay calmer in the long run. Barrel racing becomes a job that they might have to do multiple times and not an excuse to get all excited and stupid.

Frosty wasn't noticeably more 'awake' prior to his first run on Sunday, but when he left the gate...He found another gear. And....as is completely common for a green horse that suddenly decides to run faster...

He overshot the first barrel. He was about a stride past it before he realized it and went, 'Oh crap...That was the barrel back there' and he just shut down in mid-stride and made his turn. LOL. He was still wanting to run harder though and overshot his 2nd barrel as well. I could feel him evaluating the situation on the way to 3rd and correctly guessed that he would want to over-rate that one, so I just kept driving and asking him and he didn't set up or overshoot that turn. He did catch his outside front toe on the backside of the turn and had a noticeable stumble though.

Even though Frosty had 2 big loopy turns and a stumble, his time was exactly the same as it had been on his first run on Saturday...so technically, he was running faster. He just wasn't able to master the increased speed AND the turn all at the same time.

One of the biggest shifts in my attitude, since Moon, has been....I am less inclined to demand perfection during a run. The beauty of hind-sight, IF you CHOOSE to allow it to teach you something, is that you can go back and realize where you made mistakes. However, you can't just focus on what you did wrong, you have to recognize what you did right as well.

My method of training produces horses that 'hunt the barrel'. That is my strength. Where I missed the mark with Moon was, I did not trust my training. Because I didn't trust MY training, I let others influence me on how and what I should do to 'fix' my horse. I made mountains out of molehills...but that is another post entirely and I will be talking about that in the near future.

So, after that run in Frosty, I was glad I didn't carry over my time. I figured Frosty could use another run to get his focus back. He had picked up the correct lead for the 1st barrel the 2 previous runs, so I put my bat away and decided if he picked up the wrong lead, I would just shut him down and restart.

Frosty walked to the gate, picked up the 1st barrel and just blasted off...In the correct lead...so I let him go. I knew he was running harder again, but this time he had his game face on and he sank into that first turn with perfect timing and absolute confidence. He came out level and pushing hard and I was cheering him on. LOL. He ran straight across to the 2nd barrel and sank into that turn just as pretty. He snapped around and fired hard for the 3rd barrel. I was still talking to him and telling him what a good boy he was and he just flowed around the 3rd barrel and ran for home.

That was probably the most effortless run he has ever made and I could feel his confidence every step of the way. He shaved a full 8/10ths of a second off of his previous times. He went from an 18.0 to a 17.2.

And strutted out of the arena like, 'What do you think of that?'. LOL. He was very proud of himself...and I was pretty darned tickled with him as well. That is the kind of fluidity I have been striving for with him and he finally got it.

To put where Frosty was running with the 'big boys' in perspective...The fast time of the weekend was a 15.1. So in the relative scheme of competitiveness, he's still slow. But confidence is key and lord knows that Frosty is not strong in the confidence department. He never has been. But it's coming. Slowly...but it's coming! :-)


Posted by BrownEyed Cowgirl at 11:38 AM

Confidence and trust take a while to build but the time is well spent. Good boy Frosty!

What a gorgeous picture. I don't know enough about barrels to know if it's ideal, but you look balanced, he's gorgeous, it's cropped perfectly - it's just a great pic. So happy for you!

You guys look AMAZING! You know exactly what you're doing and never doubt yourself. This post completely proves that. Awesome job, can wait to hear about Finals!

It's all you, girl! Game ON! Glad to hear you made it into the Finals. That is AWESOME news! You guys look really good in that picture. Sounds like you have a case of Perma-Grin too...

Sounds like you are finding your way just like the rest of us and getting back to doing what you already knew how to do. It's so much easier when the horse finally "gets it" and they are fun to ride.

Well done! sounds like now that you are letting all the "helpful" advice go and trusting your gut , you are well back into the game! After all you DO KNOW WHAT YOU ARE DOING

That is just so damn cool! I can see the brilliance of your smile from here, and I can totally imagine the Frosty Strut! LOL

Just found your blog and wanted to say Hi! Can't wait to read about another cowgirls adventures in barrel racing. :)