Oh boy...You wanna talk about taking a hit to the pocketbook...

Getting everyone all current on the necessities equals...OUCH!!!

Shoes, teeth, worming, coggins, injections. Everyone is ready for Fall and/or traveling.

Then you add in maintenance work on the LQ, which isn't quite complete yet...It still needs to get into the RV place and have a few odds and ends replaced/updated and I need to find an upholstery place that can re-do the padding on the slants (they were not in the greatest shape when we bought the trailer and my horses have finished wrecking them over the last 4 years...it happens.).

I have to tell you about Flash's first deworming experience...Because it is so 'Flash'...

Frenchie sees me approach her with anything but her flymask in my hands and she can't help but ease away as quickly as possible. Flash sees me coming, no matter what I am carrying, and he comes at a trot. He loves his two-legged momma. LOL

Flash sees me coming with a white tube in my hands and he gets very excited and runs right up to me, immediately throwing his nose in the air and pursing his lips. I'm pretty sure he thought it was a bottle. I just slid the tube in and gave him his little squirt of dewormer. No muss, no fuss.

The instant Flash actually tasted the dewormer...He backed up, gagged a little, shook his head and looked at me like he was trying to figure out why on earth I just put something so horrible tasting in his mouth. When I laughed at his expression....His little eyes narrowed and his mouth tightened up and he gave me the dirtiest, most disgusted look he could muster, then turned around and started grabbing mouthfuls of hay.

He is, without a doubt, one of the most expressive foals I have ever been around. He makes me laugh out loud, every.single.day... 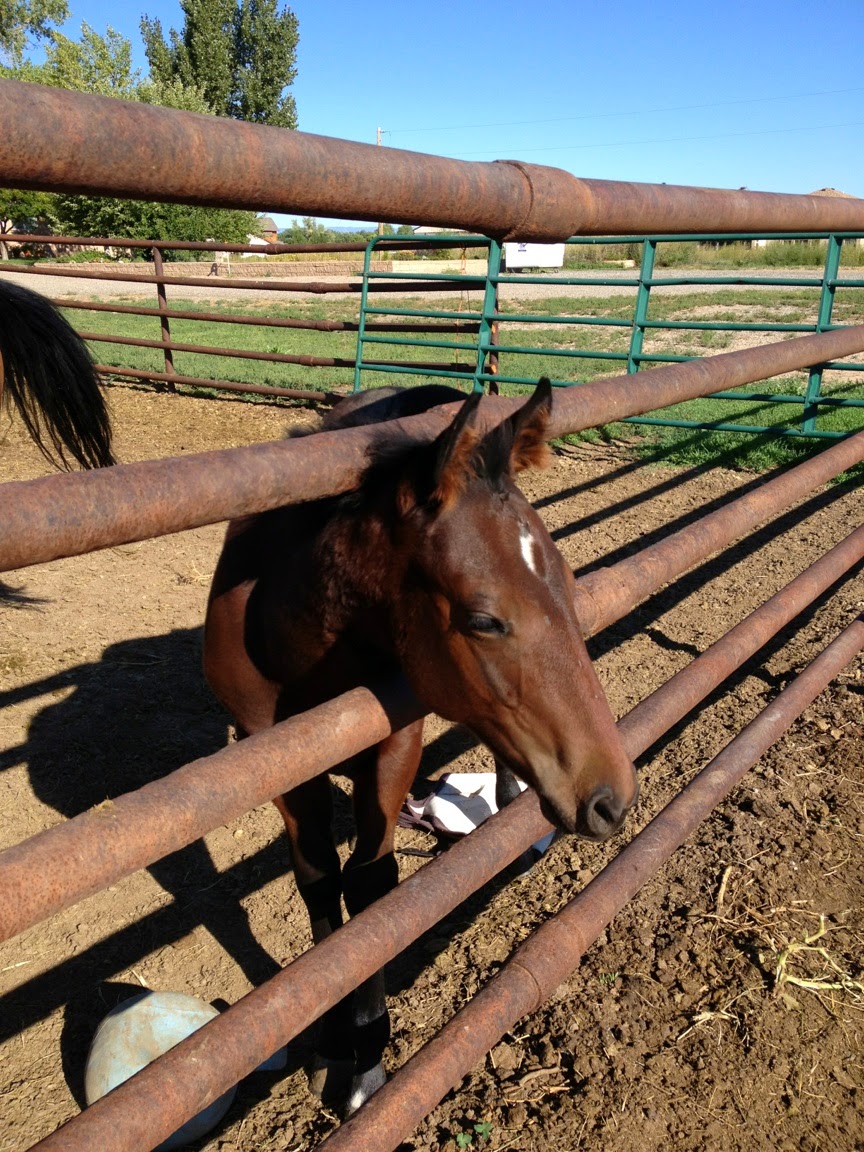 I am going to miss his happy, little face this winter.

No Arizona for him yet. I made a deal with my vet...I am going to bring his filly over and wean her and Flash together. They will stay at my place for a month or so and then before I leave for Arizona, we will move them to one of his places for the winter. Either to his house, which is next door, or to his vet clinic, which is just down the road. Both places have a 5 acre pasture, so the babies will have lots of room to run and play, like babies should be able to.

I didn't know if Flash would be ready to wean at just 4 months old, after his premie birth, but he is. You would never know his start in this world was a little iffy (to say the least!)....And I think Frenchie will be glad to see the last of this one. He is so horrible to her. It probably wouldn't be so bad if I had went ahead and turned them out in one of my pastures, so Flash had acres to roam around in, but my coming and going this summer just didn't really allow for that to happen. Next year the pastures will be set up better, so that in the future, the mares and foals can go out.

Once the weaning commences, all 4 of the mares can be put together in the big pasture on the west side and Moon can have the smaller pasture on the south side. If Moon wasn't such an a-hole, I could just put him with the mares, but he has proven time and time again that he just cannot help but terrorize anyone he can. I don't believe Frenchie would put up with his crap, but I can't run the risk of him getting after my other girls and possibly injuring one of them. So he will have settle for wintering alone.

That just leaves the 4 geldings I will be taking to Arizona with me for the winter, Frosty, Jet, Shooter and LJ.

I had contemplated taking Moon, since he is still here...and that might still happen...but honestly, I am looking forward to just having my 4 boys with me in AZ. I will be able to focus entirely on them, not to mention the expense of feeding 8-9 head in AZ was astronomical these last 2 winters. Hay was a lot cheaper in Colorado this year, so I bought extra and will have more than enough to winter 5 head at home.

I'll only be in AZ until mid-March anyway. Beretta is due to foal the first week in April, so I will be coming home to get her separated and settled in while we wait for that to happen. And instead of taking little Belle to AZ to start under saddle, I'll just start working her during that time. Since a couple more indoor arenas have become available for public use, even if the weather isn't great, I can still work horses.

I'm excited again. It took a long time to get over Moon...when you have counted on the same horse for so many years, 'breaking up' is hard to do. But Frosty is coming along. One of these days he is going to grasp that speed is a factor on the barrel pattern. LJ will come along nicely and Shooter and Jet shouldn't be too far behind. One of them is bound to become rodeo worthy and without all of the problems I experienced with Moon, so it's all good. :-)


Posted by BrownEyed Cowgirl at 12:52 PM

Just an FYI- there are a few places I deal with a Lot that have the padding and vinyl to redo the trailer dividers and the little push pin things that hold it up are easy to find too. I need to do my own so I will be making the trip and can price it out if you'd like. Just send me the measurements and info and I can work up a price for you.

Oh sh*t... Thanks for the reminder. FALL SHOTS! Ugh. Well at least it's over and done with!

You know CnJ...I was thinking that re-doing them myself wouldn't be that hard...It's thin plywood, with padding and a heavy vinyl stapled on. I just didn't know where to find the push-pins. If you know where to find those...I would be set. I'll get a hold of you when I get there. Thanks!!

Sounds like you have a good plan in place. Flash is such a character! It will be fun keeping up with him on this blog over the years to come.

Flash sounds like a character! Sounds like you have it all sorted out.BTW are you headed to NFR this year? hubby and I are talking about it. Or you could slip up here and see Our Canadian finals first

Yes we are going to the NFR. That has become a required annual trip for us. It just never gets old. :-)

I was wanting to come up for the CNFR this year and get together with some of you wonderful Canadian ladies...but I'll kind of have to see how October goes. The timing wouldn't be too bad for me. I could hold off hauling to Arizona for a few days.

Well hopefully we won't be pass ding in the airport this time in Vegas! Will keep in touch