I have yet to get back on track with my saddle horses and I am feeling rather disgusted about it. I brought shiny, fit horses home from Arizona and after only 2 weeks of being dumped in the pasture...they are not so shiny and not so fit looking anymore. Grrrrr!!!!

Of course everything that was going on with Flash for that first week took precedent and I cannot complain that that was wasted time. 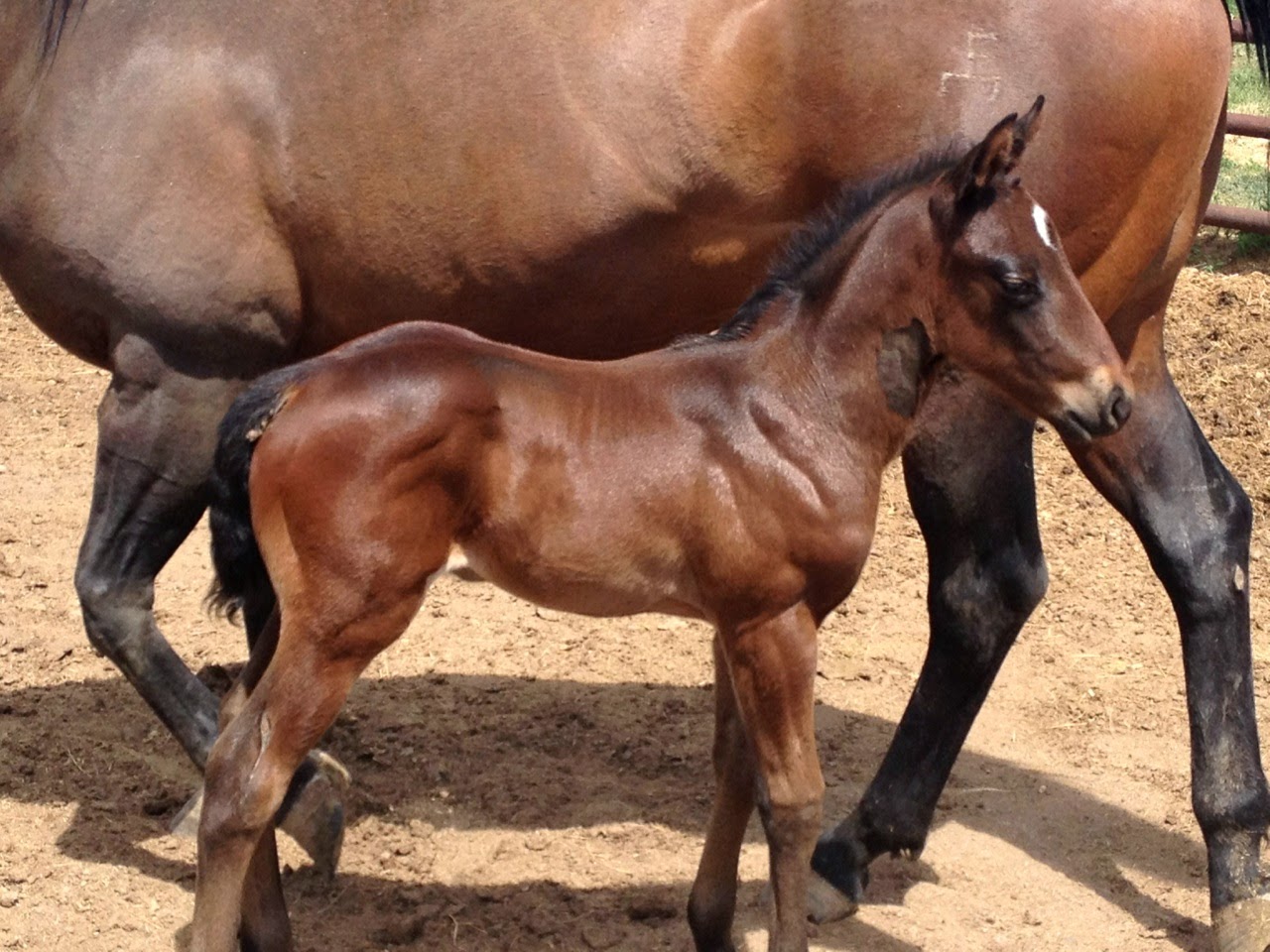 Of course, MH and I had our Vegas trip planned for the last weekend in May, but that was uncertain until we knew how things were going to go with baby Flash whether that was going to happen or not. It was only a couple of days before we were supposed to go before I felt comfortable enough with Flash's progress to make the decision that it would be alright to go.

Since I had not ridden Frosty in all of that time, I decided it was entirely unfair to him to even attempt to take him to the NBHA Supershow race at the South Point. So we went sans horse and just enjoyed a few days in Vegas. I think both MH and I were still exhausted from all the stress surrounding Flash's early arrival, so it was a much lower key Vegas trip than usual. And....Even though I was confident Flash was okay to leave, we both still worried about our little guy.

My pet sitter did send texts to let us know he was doing fine, but the first thing MH and I did when we got home was get out and walk straight over to see the baby. LOL.

Frenchy was thoroughly tired of being confined to the covered stall, so I let both of them out for a little exercise. It was all cute watching Flash run and buck around the pen, but when Frenchy started doing it and came very close to kicking him in the head and knocking baby down, that was the end of that for the evening. I feel for Frenchy. She is not used to being in restricted spaces for very long. Unfortunately for her, it's going to be another few weeks before I can turn her and baby boy out.

Flash still has some tendon constriction in his front legs. As you can see in the above picture, he's still a bit over at the knee. At this point, it's to be expected, considering how contracted the tendons were when he was born. The vet gave him a shot right in the beginning to help relax those tendons, but it will probably take 30-45 days before Flash's legs catch up and get totally correct. He needs exercise, but limited amounts. He also needs to be able to lay down and rest frequently and that wouldn't happen if momma was on the move in the pasture.

At least Frenchy is getting to enjoy some movement in the larger corral and little Flash is enjoying some sunshine... 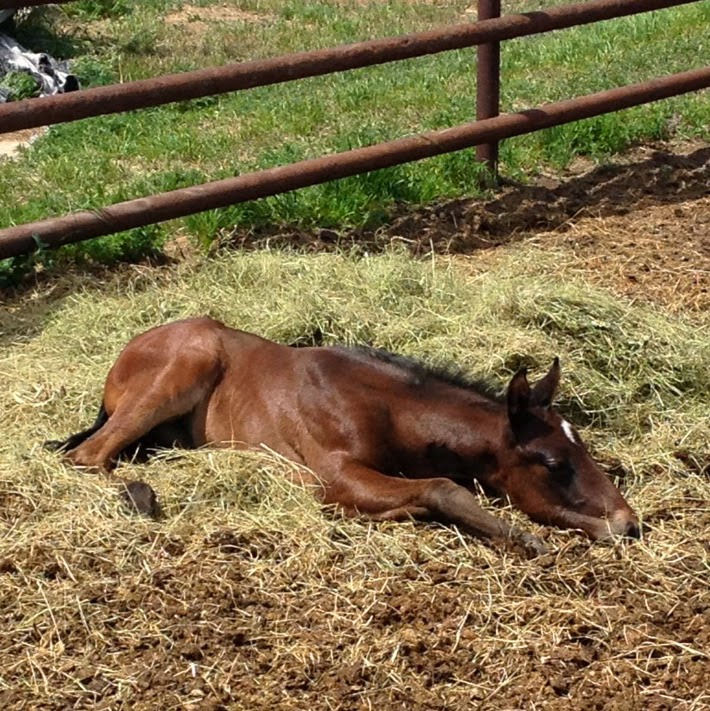 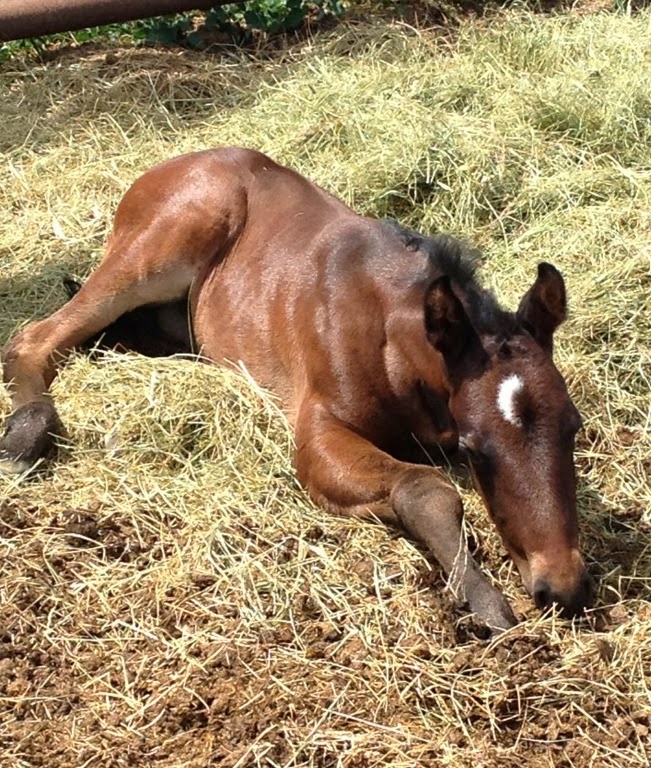 He lays like this a lot. With his front legs stretched out and his chin between them. More often than not, he is also nibbling on hay while doing so. Very seldom does he lay flat out on his side, which is slightly unusual. Most baby's flop down and got flat out to sleep. 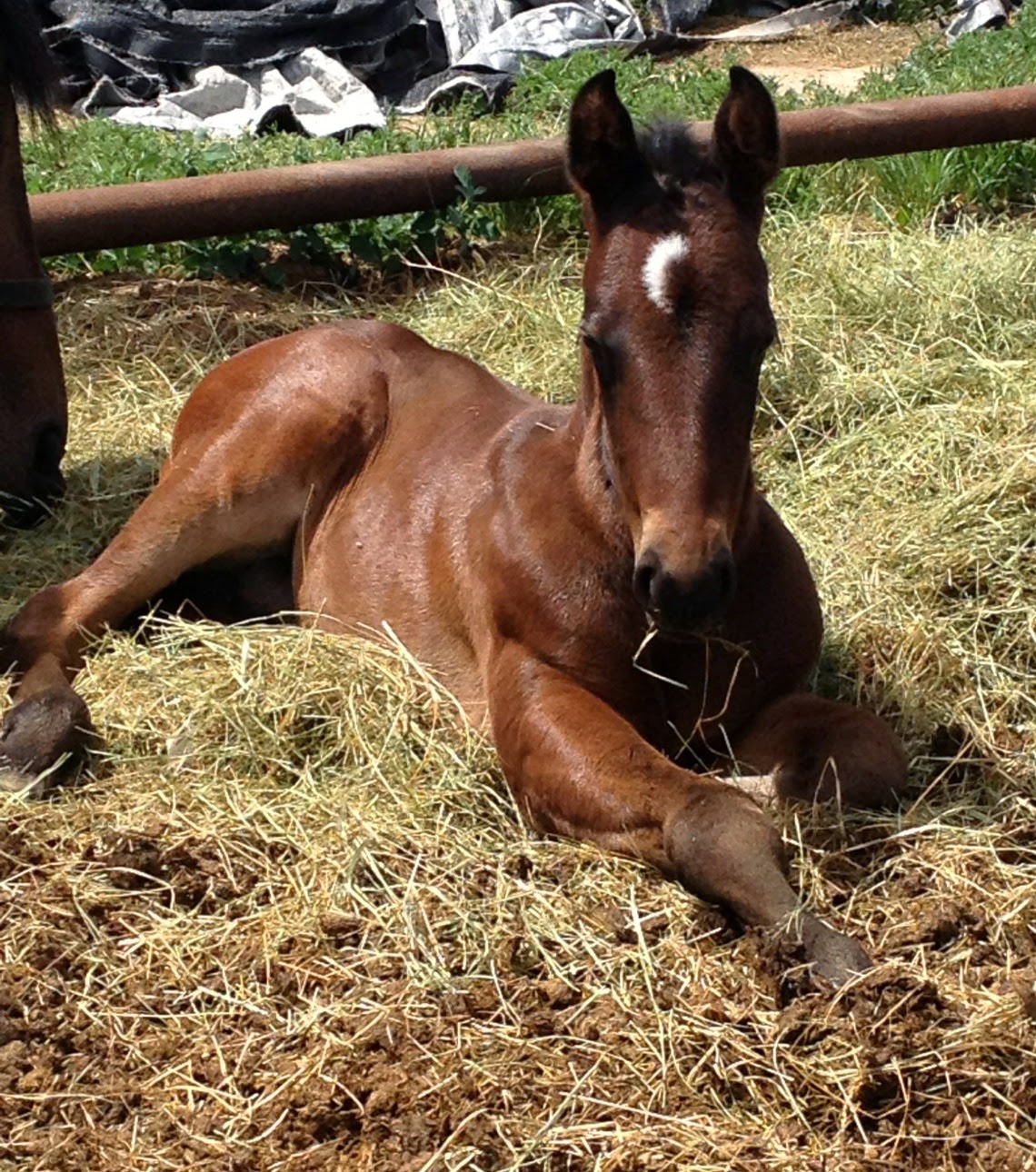 From moment one, this colt has had a piece of hay hanging out of his mouth. It's hilarious. Not only is he determined to start on a hay diet right away....He bellies right up to momma's grain pan and digs in. Last night he had both front feet IN the feed pan and was doing his best to hog it. I swear, this obsession with food/grain is a family trait. Every one of these horses, all the way back to my old dun mare has been extremely food oriented. LOL.

I, myself have not been feeling so peachy. My dang hip has been bothering me again and yoga exercises has not relieved the pain. When I get this stiff and sore, it doesn't even help to go to the chiro because I'm too tight for him to even adjust. I finally got myself to the health food store and stocked up on all the stuff I had run out of and am getting my system under control again. I knew I was getting run down by the time I left Arizona and then an additional 2 weeks of stress and being on the go?...Time to take care of myself for a couple of days and I should be back to feeling normal again and ready to get back to work. I feel really behind now and right when all the events are fixing to crank back up again around here. (sigh)...Oh well...It's no fun going when I don't feel good anyway. The ponies can wait another day or two until I'm up to par again.

On a more happy note...Beretta is in foal. She should have come back into heat by now and she has not. So Yay for that!! :-)


Posted by BrownEyed Cowgirl at 10:26 AM

Yay good boy Flash and exciting news for Beretta :) Im sure you will feel into it again soon a rest is just what you needed after a long winter and a stressful birth.

its great to see how well Flash is doing. He is adorable. My hip gets tight too when I stop riding for a bit. I really find riding is the only thing that keeps it flexible.

I love the little moon on his face- looks like you'll still have a Moon to ride!
My right seatbone is always sore and tight, probably affects the way I ride but since I don't compete it's not an issue. I have one of those Back on Track mini blankets (about the size of a saddle pad) that I sleep in for my lower back and hip, it really helps.

I hope you do feel better soon my friend. You aren't doing anyone any good by running yourself down so low.

Every time I look at Flash the word that comes to mind is "Stunning"! I cannot wait to see him mature, he is going to turn some heads for sure.

I had a foal with severely contracted tendons, and did a lot of massage on the upper leg muscles that the tendons attached to. Helped the muscles and tendons balance out. If he'll go for it of course, haha!

Glad to hear that the little man is perking up. He's way cute and I like his markings.

We always get caught up in things and forget to take care of ourselves. It's easy to do, believe me I know...

My left hip gets tight and the right one just IS tight. One from a torn muscle last year, the other one because it never got worked on too.

glad Flash is doing well and you got a little break.I am never too worried about over at he knee,as it seems to come right in its time.far rather that than those scary weak floppy tendons that can happen