Not hearing from anyone who had actually given their IR horse injectable glucosamine...I opted to make Frosty my guinea pig. He just got his 3rd shot.

There for a couple of days, particularly the day the farrier was here working on horses, I was a little nervous. Frosty was acting rather stupid about having his feet done and when Frosty acts that way...I automatically think, 'Oh my god, he's IR symptomatic again'. He was having a difficult time holding his hind legs up long enough for the farrier to get him re-shod. The farrier said he was definitely more stiff and resistant on his right hind than he was on his left hind...Which I found interesting because from what I'm feeling...I sure thought it was his left hock that was bothering him the most. Of course, stiffness and resistance holding the right hind leg up could be from the fact that he IS more sore on his left hock and not wanting to put all of his weight on it. What the hell do I know...I'm not a vet. I'll leave the educated work to the guy I pay ridiculous sums of money to to tell me exactly what is going on. :-)

Technically, you shouldn't really see or feel any improvement in a horse on injectable glucosamine until around the 4th or 5th shot...and if they are really bad...the 6th or 7th shot. But if you haven't noticed an improvement in movement by the time the loading dose is done...It's time to start looking for other reasons and/or options.

Interestingly enough...I'm already feeling an improvement in Frosty. Today he was striding freer, felt livelier and even carried his tail straight the first 1/2 to 3/4ths of the ride. By the time I thought to take a picture of how straight his tail was hanging...It was back off to the side again. :-(. That in itself tells me 'something' is happening though. Not being able to get Frosty to carry his tail straight has been a major frustration to me because that tells me something was still going on in his spine, particularly over his hips. I have worked on both ends of this horse (poll and tail), massaging, accupressure and stretches trying to get whatever is going on resolved. Nuthin' doin'.

Since Frosty is so susceptible to chemical drugs (Cindy D. will hate to hear that. The vet cannot even give him a full dose of a sedative or he's on his knees. He's a cheap date!!), I did wonder if he would be just as responsive to 'other' things. Obviously, I can't be totally sure...but, it kind of seems that way.

Even if the injectable glucosamine doesn't help his hocks as much as I had hoped...I truly believe they are starting to fuse and we are most likely just going to have to inject them to force the fusing (like I did with Moon)...I was/am hoping that it helps his spine and pelvis. I'm also kind of hoping that if he tolerates the injectable glucosamine well, that I will be able to start him on a feed-through.

When Dancing Donkeys mentioned that feeding glucosamine to a non-symptomatic IR horse should be okay and yet when I tried to put Frosty on it a couple of years ago and he reacted negatively to it, it got me to thinking...I'm wondering if it was just a timing thing? Frosty may not have been actively symptomatic at the time, but he was far from fixed. I will revisit this feed-through option again when I see how he tolerates a full loading set of shots. 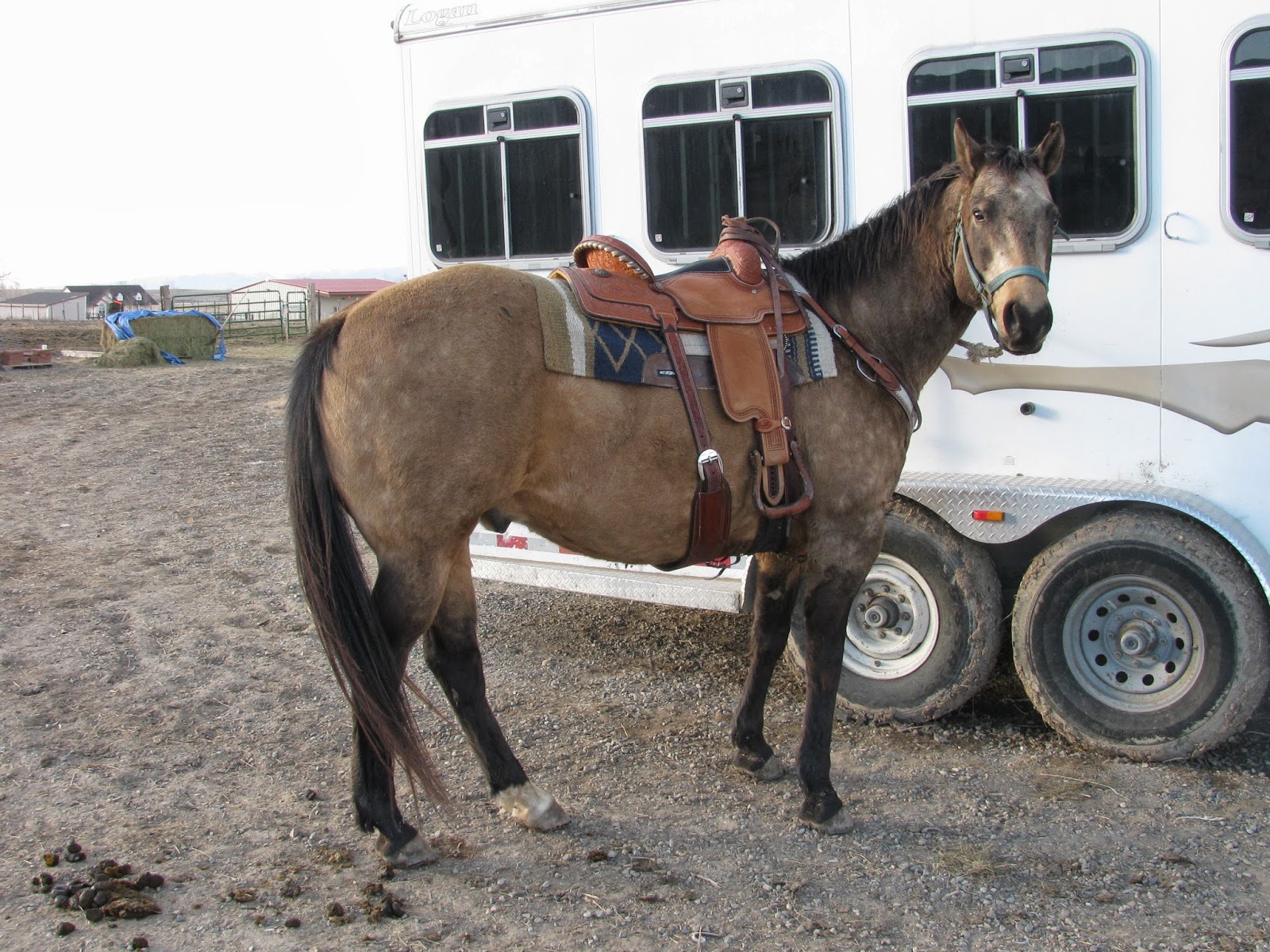 And this is him today... 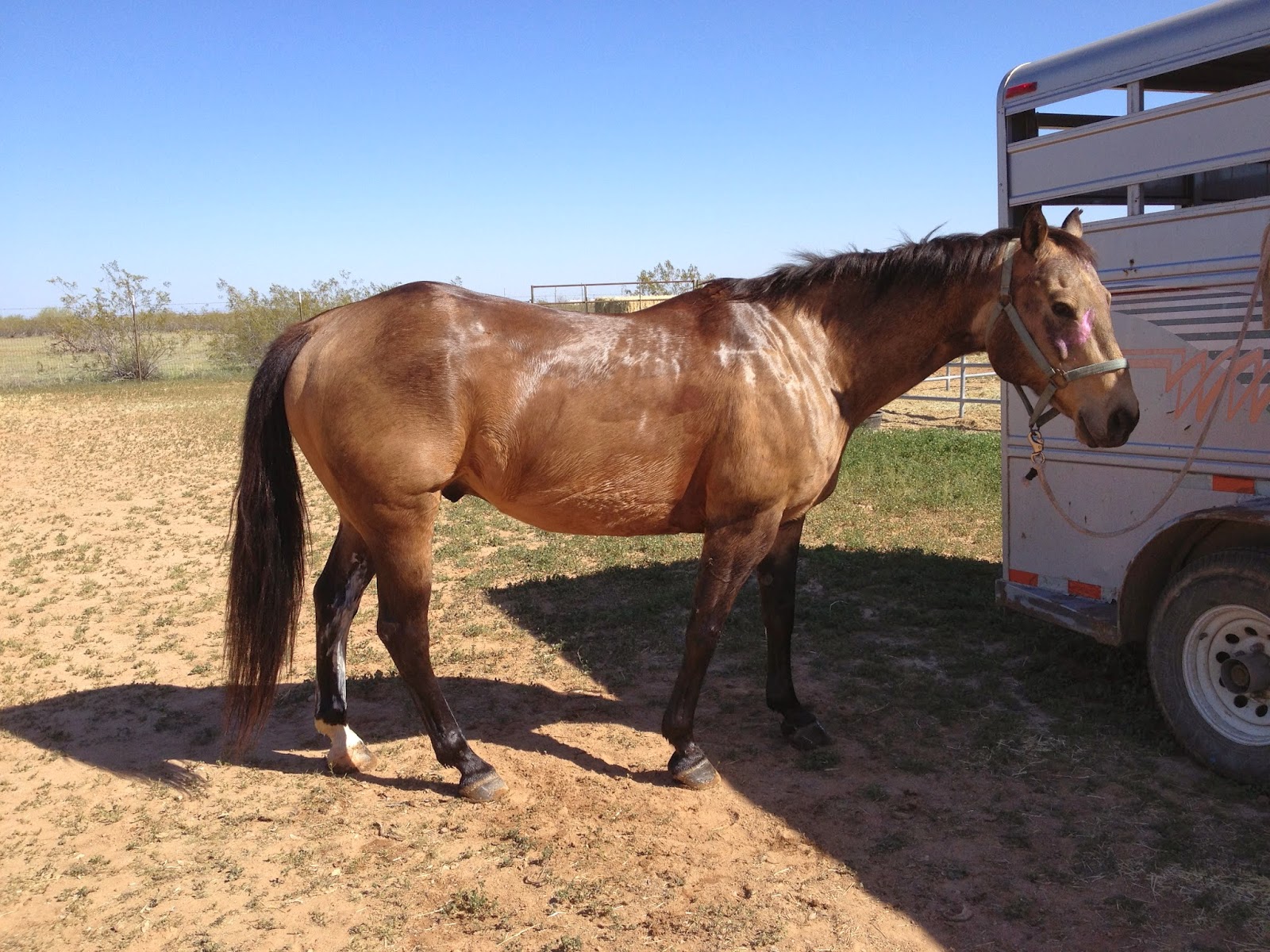 He is, in fact, a little on the thin side for my taste, but he feels good and has more stamina that I ever would have thought possible for this horse and he is starting to act like he has some athleticism. He was even more peaked over the hip for a while, but is starting to fill back in again, so maybe he just needed to shed the pudge, so he could actually start building muscle. Pictures just cannot show how much blubber and bulk this horse has lost. He used to make my hips ache, his back was so wide and the saddle that is on him in the first picture is the ONLY one that had a back cinch long enough to go around his 'I'm carrying twins'-sized belly. I didn't think his ribcage was ever going to sink back into a normal size...And he still has a healthy spring of rib on him...but it does not look like it is from bloat. LOL. His back muscling has changed drastically as well. It took forever and a lot of hard work, but now instead of over-using his loin and refusing to use the entire length...He now has long muscling that runs the full length of his back. I just love ponying him with no saddle, just so I can watch the muscles play along the full length of his back. I feel like it is my greatest achievement with him. LOL.

Of course, I say he is starting to have some athleticism and then I show you this... 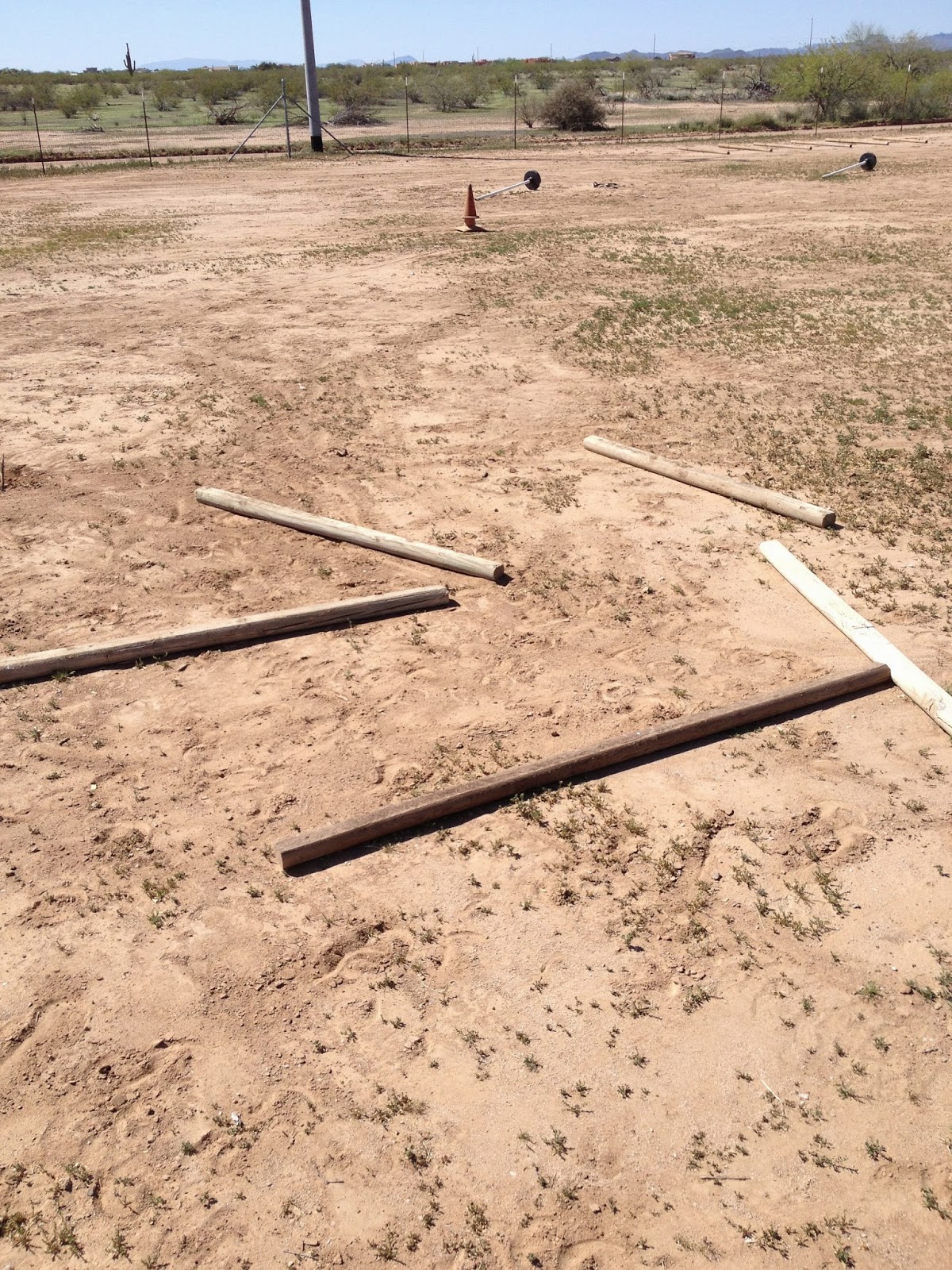 This is what is left of my trail 'L' after working Frosty on it. OMG...He is such a klutz with his feet. LMAO!!...And I run barrels on this horse, with as much speed as I can get out of him? I might need my head examined. He has no clue where his feet are! Hahahaha

I sent that picture to Cindy D because I knew she would get a kick out of it. She texts me back, 'One step at a time. I'm sure you know that. lol'. I text her back...'That IS one step at a time!'. Oiy Vey!! Well, there is always something you need to work on with a horse. They are never, ever really anything but a work in progress. We will work on this! ;-)
Posted by BrownEyed Cowgirl at 12:22 AM

Ok, remind me (again lol) of what your basic game plan was to rehab Frosty. Because that before pic sure as heck reminds me of Applejack. No matter how "in shape" he is he just doesn't lose that "I'm a pregnant mare" belly.

Looking good! You've done an awesome job on him.

It's a wonderment, figuring out horses!

Cdn-For a long time, I had Frosty on a reduced hay diet. His fiber came from beet pulp shreds and a high-fiber pelleted feed. I used ADM's UltraFiber, but I suspect hay pellets would also work. I also fed him a high-fat (flaxseed based) supplement, anywhere from a 1/3 of a cup, up to a full cup, depending on his energy level. And exercise, exercise, exercise. If I accomplish nothing else with horses in a day...Moon and Frosty get exercised. A lot of time I'll ride one and pony the other. No less than 5 days a week, with lots of long-trotting and loping. I just get out and cover some country. These last few months, we have also been doing trot-over ground pole work. That has been the greatest boon to getting Frosty to really stretch forward and through his whole back and use his abdominal muscles.

And the light bulb comes on for me.

After I rode Killian and Trax the other day my hips joints ached for 2 days. In fact they are still just a tiny bit sore, and I couldn't figure out why.

It's Killian. He is wide like Frosty used to be.

He does look fabulous now, you have done a great job with him. If you ever need anyone to babysit, he can come hang out with me for a while! LOL

He sure does look a lot better! And Im sure he feels better too. I feel like Jessie is the same, so fat that the other day my trainer asked if she was pregnant :( and she gets rode lots and hard. But I know that having her on a round bale is bad for her but way easier than feeding in winter...but its spring now so she will be cut back a lot! Im also thinking of putting her on the adequin shots gonna make an appointment with a vet who is also a massage/chiro and get her to do the whole work over and get her opinion. I dont notice hock problems but I worry as I know she uses them a lot and I dont want trouble and maybe its why she isnt stopping as hard as she can (although I think thats still me)