Probably one of my biggest frustrations during a run still is that point when I get right up to the 2nd barrel...

And for the life of me, I can't quite figure out what to do next.

LOL. I know, it sounds crazy. But it has been driving me nuts for like 2 years now. Most of the time I get 'it' wrong...whatever 'it' is...and only if I'm lucky do we eek by that 2nd barrel. Sometimes I get 'it' right, but I have never actually been able to put my finger on what exactly I did correctly.

At first it was obvious things that were causing the problem...Like sitting up and pulling and then not driving deep enough into the pocket, etc. etc.

Well, it's finally come down to I know what to do all the way up to that spot and if I can get through it without knocking the barrel over, I got the rest of it... 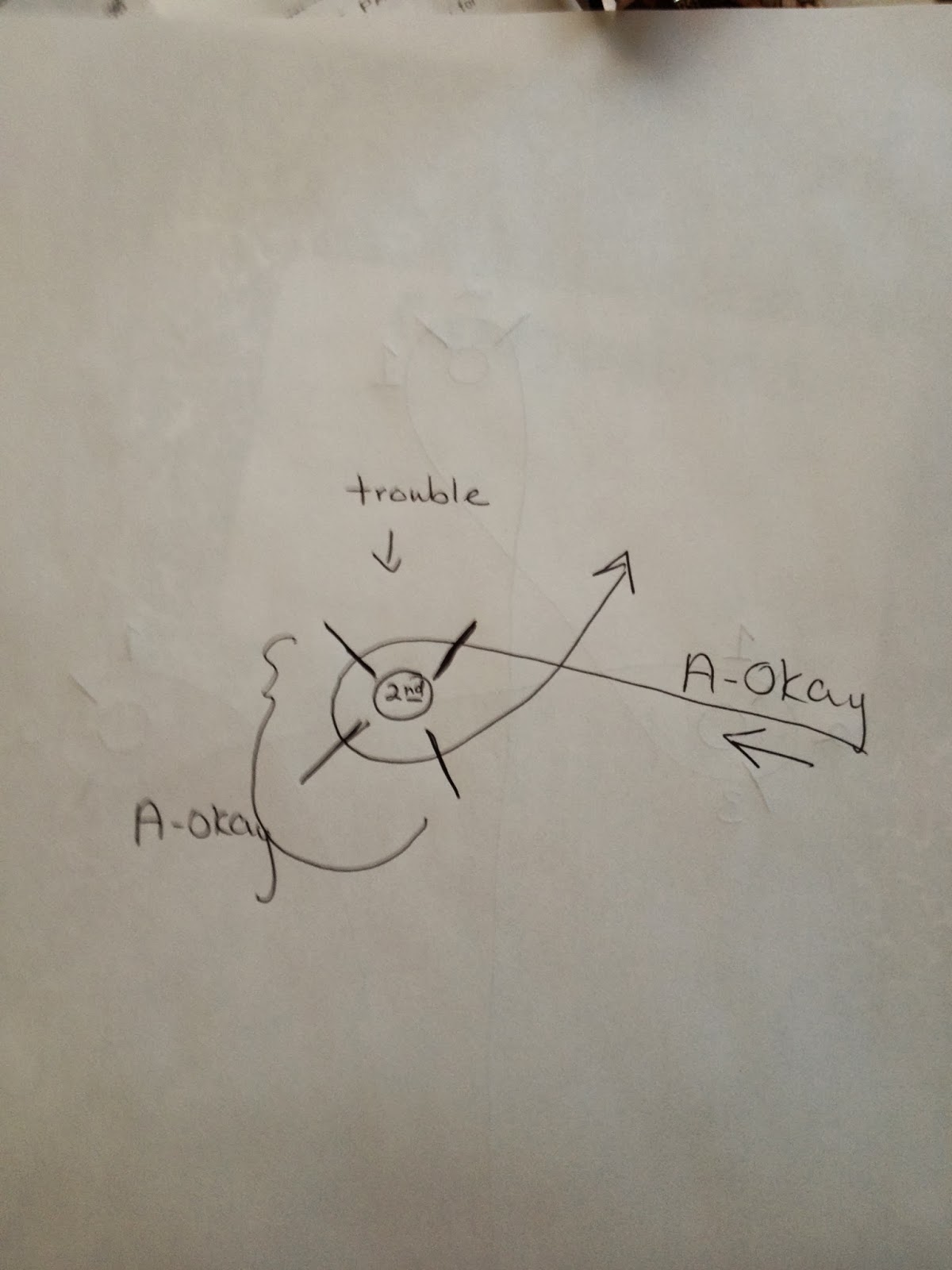 If you follow the spokes of the turn, counter-clockwise, the direction of the run...I am good right up to that 1st spoke. Then I have absolutely NO IDEA of what to do with myself between the 1st and 2nd spoke and in fact, for quite some time, the only place we tick a barrel...and it is always with my knee now, not Moon's shoulder any more...is right at that 2nd spoke.

If we can get by that 2nd spoke with only a brush of that barrel, the rest of the turn is A-Okay.

The pieces of the puzzle, after confounding me for so long now, are finally starting to fall into place.

After looking at those rodeo pictures from Gila Bend, I realized, I HAD to get more forward on Moon so I wasn't falling back and pulling on him in the turn. But I had just gotten myself to break the habit of getting too far forward and lifting myself out of the saddle.

The pendulum of things you do when you are trying to figure something out inevitably swing from one extreme to the other. I went from too far forward to to flat in the saddle. I wasn't sure what to do.

But I was looking at pictures of A's run at the same rodeo...and that girl's riding just makes me drool. She is so cool and confident in her horse. It always looks like Mags is going to wipe out the 2nd barrel...and he NEVER does....Ever... 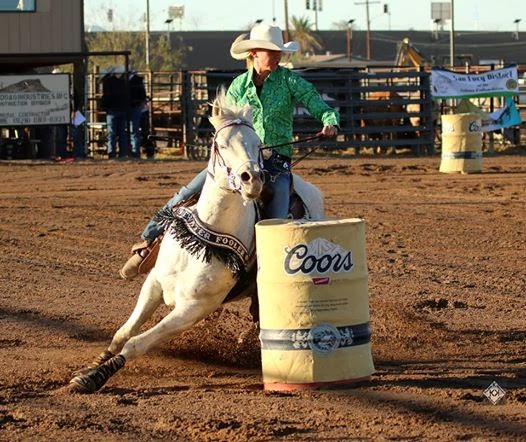 So I asked A, 'How to you do that?'. She is so humble, she just shrugged. 'I don't know, I just trust Mags and look where I want him to go.'

I have been studying A's form for quite some time now because the girl is just always in the perfect position. ALWAYS!!!

So the other night when I was practicing Moon, I was actually trying to emulate her riding style. She's such a free rider and always balanced on her horse. And emulating her, coupled with knowing I was too stiff in my lower back is how I came to the realization that if I just got soft and relaxed in my lower back that I could stay forward on Moon without jumping in front of him like I was prone to do. 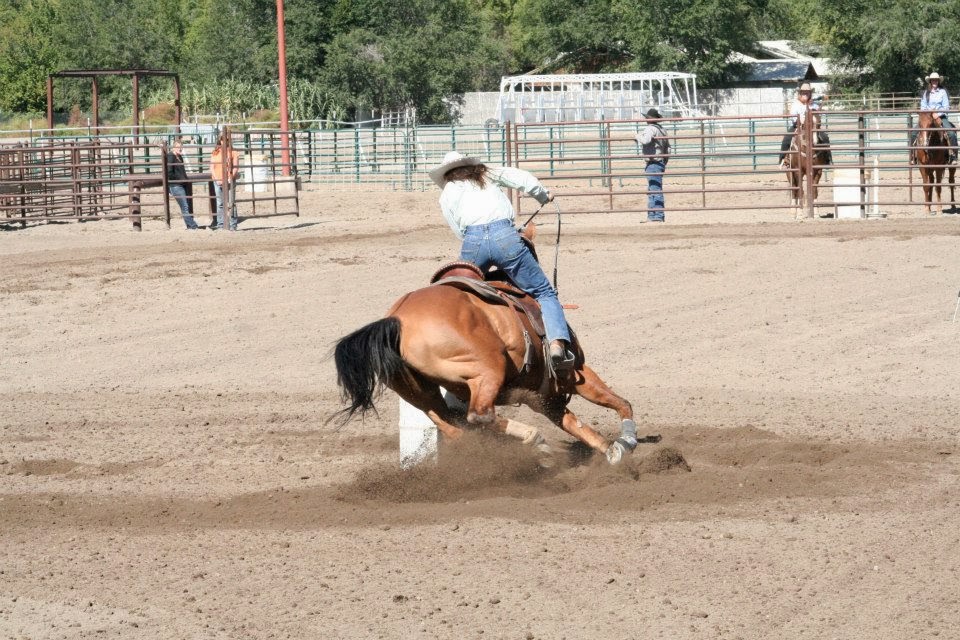 Boy, I sure don't miss that crap!!

But we are still brushing and tagging that 2nd barrel...and sometimes the 3rd. We brushed both of them at Buckeye. I pretty much knew WHY, I just didn't know how to fix it until after that run.

When I was practicing Moon, I was thinking about keeping my lower back soft and just letting him roll through the turn and I wasn't looking down. I don't know if this happens to other people, but sometimes I get little pictures that pop in my head and all of the sudden things make sense. In an instant I saw the picture of my Buckeye run, with me glancing down at Moon's shoulder to see if he had cleared the barrel yet and in the same instant I got a picture of letting my eyes slide along the fenceline of the arena where I was practicing.

I came home and looked at this picture of A and I got it!!

I'm riding to the first spoke in the turn, don't really know where to look, so I let my eyes drop, then IF we clear the barrel, I rotate my head around to finish the appropriate 'look'.

The appropriate thing to do is keep my chin up and simply start rotating my head for the turn. Literally let my eyes slide down the fenceline. All this time I have simply been focused on looking to make sure, are we there yet?...And with a horse that is as turny as Moon...that's all it takes to shut him down and roll him into the barrel.

I know. WHAT the hell was so hard about figuring that out?

My problem is that I am very much a mechanics person. Some people just go out and learn to make a run on feel alone, whereas I am more of a 1,2,3,...A,B,C. kind of person. All of the 'feel' I have ever been able to develop when it comes to riding and/or training?...It all came from having to break things down and learn the mechanics of how a horse moves and what the desired affect was. As I have gotten older, that tendency has gotten worse. I was never much of a 'free-wheeler' even when I was younger...I wasn't allowed to be. My mother was brutal about correctness and I developed into a very tight, correct rider. I mean, don't get me wrong...I like being a correct rider and I know I was lucky to grow up in a family that strived to be good...But if it wasn't for my dad, allowing us kids to tear around on whatever horses and ponies he constantly had going through his place, horses would not have been near as much fun. There always has to be a balance.

Now, I could never look as far in as A is doing in this picture. I will have to adjust how much I rotate my head to suit Moon's super turny style. Not that Mags isn't turny. But he's never been shut down like Moon has in his turns. I'll have to look more forward, just a slight rotation of the head and then let it swivel around to pick up the 1st barrel, then swivel some more to pick up the 3rd barrel. But I finally feel like I have the last missing piece of the puzzle. I know it works on Moon, he's done it for me before, I just didn't realize what I was doing to make it happen.


Posted by BrownEyed Cowgirl at 5:13 PM

I agree with A. If you stare at the barrel, you're likely to knock it down. It's like a jumper looking at the ground before a jump. I had a trainer always yell out, "Is that where you're going to land?" And sure enough as I looked where I wanted and trusted the horse would go with me, problem was solved. Don't save it for the rodeos, practice at home. Trust that Moon knows what he's doing and look after you've run home to see if he knocked a barrel. There's no point of staring at it while it goes down. ^.^ You guys have done so much and worked really hard to get here. Eyes up! Trust the pony! <3

As we both know I do not run barrels, so I've got nuthin real helpful to input except that my friend in WY Ryane, who rides reining horses and does cow work, when I watch her make her reining circles I noticed once that her head and eyes are always tilted to that exact point where she is headed next. I asked her about it and she told me that she rides each point in the pattern before she ever gets there with her horse, sees it exactly in her mind how it will be, and so by time they reach that point it is already done. I'm not sure if I explained it right but it is the basic gist.

I hope this does the trick for you!

Madeline-I don't want to sound like I am poo-pooing your supportive comment, but I think you missed the point of the post. I've been told for a couple of years now (and it's a favorite comment amongst barrel racers) to 'just look' and 'trust your horse'. It's NOT helpful information. And unless you know what you are supposed to be practicing...You can't practice with purpose.

The problem I have is an exceptionally common one amongst barrel racers. Probably THE most common problem you will see. I've posted many times on running into that section of the turn and then wondering 'Oh crap, now what?'. If you don't know what to do and nobody seems to be able to explain it beyond 'just look' and 'trust your horse'...Then what?

The point of my post was, I finally figured out how to handle that section of the run. Until I put the pieces together, I did not know, and nobody could explain to me how to get from Look A (which is straight between your horse's ears) to Look C (which is when the horse is on the backside of the turn and you look toward the 1st barrel). Look B eluded me because in fact...There is NO reference point for you to look at. You just have to let your eyes slide (which allows your head to rotate) to the appropriate angle your horse needs to keep him free flowing through the turn and then progress to Look C.

Maybe it's one of those things that seems so incredibly obvious that people just assume you know it, but the truth is, if you aren't getting it...It's not. It's a stumbling block.

And I just kicked it out of the way.

This sounds sort of like the explanation Jim gave me at the ADT about the cones courses and Why certain balls fall more often than others. I hope this works for you, because we all know how much time, effort, blood, sweat, tears and swearing has gone into you guys getting this far.

I know what you mean about people saying- just trust your horse. It's like telling someone to just feel for it. Which we all should at some point, but when you don't know what you're feeling for, its tough to know how it should feel until the horse does it So incredibly right that there's no mistaking it. Been there, done that. Some days I still have a hard time just feeling it.

I hear that, I am glad you finally figured it out, reminds me of a clinic I was at last year where the clinician said I dont know what you just did but keep doing it...so not helpful cause I have no idea what i did either. Sometimes it is the small things like that that make a big difference, sure worth trying it out

I love your breakdown of the mechanics. Also, when you drop your eyes your shoulder tends to drop, so keeping the chin level helps keep the shoulders level, which keeps the reins level...

the relaxing idea makes sense to me. In dressage my best and most accurate rides are when my seat and legs are relaxed with the horse and not jumping 3 moves ahead.