Moving on from the horsie love of my life...

To his little sister...Who had a temper tantrum today... 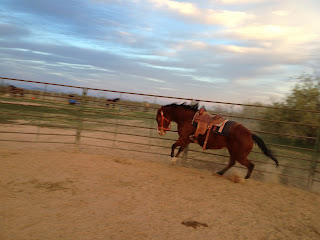 And I do mean a long-term tantrum!...She spent 4 hours in the round pen, sulking. I kept going in and moving her around, just so she didn't get to stand there and stew in her own juices, but by the time the sun was going down and she was still acting pissy and thought 'Whoa' was optional...

I went and got a rope.

See, this is where I am lucky...I know my horses because I've dealt with their mothers and their grandmothers. I've rode their aunts and uncles, brothers and sisters. And I'm telling ya...Beretta was having a 'Jane' moment (That is her maternal grand-dam). Hahaha. Yup...I dealt with this bullheaded, sulled up, 'I'm not coming out of this' attitude from several of Beretta's aunties and uncles and it came from their mother, the Leo-bred mare. Awesome horses. But once they get bound up in a mental state, they can stubbornly cling to it. It's as if they get themselves there and can't figure out how to stop it, so they just focus on being pissed off. Focus is good right? LOL. Only when headed in the right direction!!

Now, you might be asking, What on earth could possibly set sweet Beretta off on such a tangent?

Oh, it was the saddle blanket I used.

No joke!! This is the blanket I use for sacking out and saddling colts with because it's light and floppy and it was handy when I saddled her...and Beretta hates it.

For no other reason than it has little strings on the back end that 'tickle' her hips.

Yea...I forgot...Or I would have grabbed a pad. But once she got that mad about it and set into her tantrum, I thought, 'Forget you, you little heifer. You can just get over it.'.

Oh she was mad...and she stayed mad.

That's why I got the rope.

It was my intention to just neck rope her and use the rope to remind her what 'Whoa' was...But I s.u.c.k. at roping horses. So mostly I was just throwing a big old loop out there and whacking her with it. LOL.

I did get a front foot roped...Don't ask...I dunno...I think she just stepped in it. LMAO.

That got her attention and she finally decided that being pissed off at the little strings that were touching her hips was less important than figuring out how to get me to stop throwing that rope at her. Temper tantrum over. She walked up to me, whistled through her big nostrils (she does have abnormally large nostrils) and dropped her head. She looked very relieved to have figured out how to get back to her normal self.

And that is just how these 'Jane' horses are. Sweet as can be. Red-headed to the core. ;-) 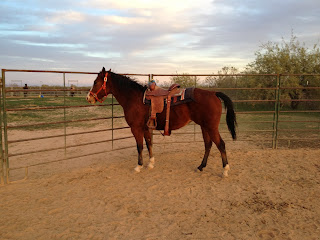 It was unfortunate I forgot about that blanket bothering her, because I really don't like Beretta to have to do a lot of circling, much less bucking and tearing around like that. I certainly don't want her to hurt that bad leg of hers. And that is really my only concern about pissing her off. Normally I would not care much if the blanket was a problem, but I do have to be a little extra careful with Miss B.. I do have every intention of riding this mare this year, even though she is being bred to an awesome stallion. I want to get to 'know' Beretta, even if I can't compete on her.

And I'd like to see her in a really good condition, because right now, she looks rather 'unfortunate'. She is a massively thick mare for her size, but she is so bulky in the shoulder that she looks unbalanced and to be honest...kinda ugly... 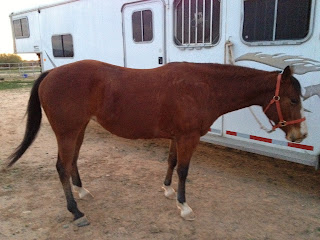 She was a little tired and spraddle-legged after her afternoon adventure. I know her hips were hurting. I'll start putting the Back On Track blanket on her tomorrow and then take her for a ponying session vs. working her in the round pen again. She just can't physically take going round and round, so much like I have had to with The Big Bay, I will just have to work around her physical limitations and keep after it slow and steady. I'm gonna start calling myself, The Turtle Trainer. Everything I do is slow. LOL
Posted by BrownEyed Cowgirl at 9:09 PM

Ha ha My Boy hates those too I actually cut them off a saddle pad once . He has super sensitive skin. I love how you described knowing all the families of horses. Be sure to stop by my blog and check out my yard sale. :)

Well, I've always been a believer in "the slower you go, the faster you'll get there" method of working with young horses. My Eagle horse does not like the saddle strings tickling his butt either, but I purposely leave them there because sometimes you just have to get past the little, annoying things in life. I know I sure do!

Turtle Trainer is not a bad thing. Slow and right beats fast and wrong, all the time. Once you have that solid foundation in place, you can easily build from there. Preachin' to the choir, I know, I know.... Hahaha

Had my share of temper tantrums as you've seen. Still feeling the effects of that one and may for a while.

I like slow. Slow is good. Although I may be too slow sometimes! Lol! I have one saddle pad with the strings and have only used it on my Paint and on Chance one time. But I prefer pads without strings.

It's amazing how things like that set them off. Good to know your horse (and their history).