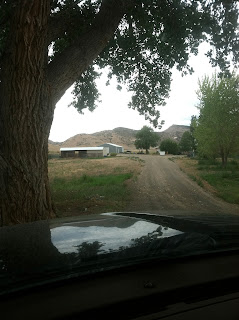 OMG...My butt is physically sore and I'm going to have to do a thousand lifts to un-flatten it. LOL

I turned out of the last rodeo in Longmont....Moon and I just did not have another 500 miles and another rodeo run in us. After Salida/Poncha Springs...We were done.

Am still waiting for official conformation that we ended up with a 4th place check there. When I left, I was tied with another gal for 3rd. I know we got knocked one hole by another friend, but heard we may have gotten knocked out of the money. They only pay 4 places and being tied for 4th means they will split that money between us, not pay each one of us what 4th place should have won.

Let me tell you what...I've heard people sneer at the association rodeos and call them 'ammies'....but I'm here to tell you...These are some tough beotches. Most of them have horses that would/could easily be top-notch Pro horses...they just don't have the desire or ability to go full on Pro. Most of them have other obligations that keep them close to home (job, kids, etc.) and some of them just like being big fish in little ponds. Either way...winning money at the association rodeos is tough.

After Sidney, NE, we were up in Henderson, CO...Had a good run there and ended up in the 'crying hole'...one hole out of the money. That afternoon we headed south to Springfield...for an evening run. The ground was questionable when we got there...but a monsoonal downpour 15 minutes before the rodeo started turned the arena into a sloppy mess. I was up in the slack after the rodeo, so I got to watch the girls run in the performance and it was not good. Most of the horses really struggled with the 1st barrel and a lot of them simply opted to not make the turn. I almost pulled out, but decided it wouldn't kill Moon to make a SLOWWWWW run. So that is what we did. Gently galloped through the slop. It was a stellar 20.2 seconds. LOL.

The next night we were up in Las Animas, which was only a 1 1/2 hour haul. We got up there early in the day and scored a premo parking spot. The rodeo ponies actually got full on shade... 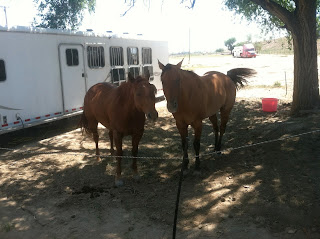 Which was really nice because it was hot as hades that day.

I'm tellin' ya...Everybody thinks it is the runs that wear horses out and that is generally not the case. It's the miles and the accommodations you provide for them. Most of the trip, my guys lived in as big a pen as I could build for them off of the side of my trailer. They got individual stalls/pens in Durango, Henderson and Salida...but if there wasn't any place to put them that was big enough for them to move around and/or lay down to sleep...I built them a pen. Parking far away from all the activity is also important. There is usually lots of activity going on around the arenas until late into the night and the lights are often left on for hours afterward. Ponies need sleep too. A lot of people will leave their generators running all night...and there are some that are so quiet (The Honda brand) that you can barely hear them run...but mine is a little louder than that and I carry it in the back of the trailer, so I always shut mine down at night so the ponies have peace and quiet.

We had a decent enough run in Las Animas that night, just a couple of holes out of the money...but it felt like Moon really got stuck behind the barrels in all of his turns. We didn't get outrun...we got out-turned that night. Moon has been running into his pockets well enough...He is getting awfully ratey though...and he just didn't have any snap coming out and then the dirty bugger set up before the eye again and it was all I could do to get him past it. I laid my bat down somewhere along the way and darned if I could find a tack store to replace it. Feed stores galor...but no tack stores. I can't believe that I didn't just grab an extra rein or chunk of rope out of the trailer and make me a quick bat. I was mad at myself that the thought didn't cross my mind before I made my run.  Funny thing is, it's not like I have really get after Moon during a run, just a well-timed pop makes all the difference in the world. My personal preference is a popper bat. It makes a loud noise, but doesn't sting like a rope can.

The next day we headed for Salida. I had already decided that was going to be our last run. I was only 200 miles from home. Going to Longmont was going to add another 500 miles and 2 days to our trip and Moon and I were baked. Done! Finite'! It was time to go home.

Our last run was decent enough. I was finally able to pick up a bat at a store and once Moon realized I had one again, he was all business. First was incredible...He snapped in and out of there so fast I didn't even have time to go to the horn until he was running out of the turn. LOL. He started to rate pretty hard at 2nd, but I have been giving him a little wider pocket and trying to remember to let him lean into the turn like he likes to, so when I felt him rating up, I just popped him on the shoulder and he got around the barrel.... 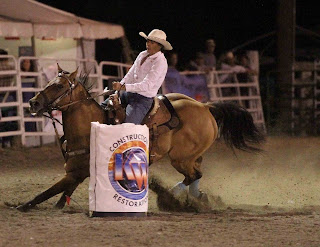 Yep....I was as nervous as I look in this picture. LOL. You can see we are about a 1/2 a stride short and  in my head I was screaming...'Don't look down! Don't look down.'...Looking down at this point has been the kiss of death to Moon and I so many times. I didn't care where I looked...as long as I didn't look DOWN!! Hahaha...Whatever it takes right?...

Third was a little wonky. For whatever reason, I wasn't quite sure where to place him. I could feel him wanting to rate wayyy early, so at the last instant, I moved him out because I knew he was going to drop that shoulder. A friend watching said it looked a little hairy from behind...Moon was running, but fading into the pocket, then all of the sudden he rated hard and jumped away from the barrel a couple of feet. He was rating so hard, that the dirt was flying and she couldn't see if we made it around the barrel until we were running for home.  (Hahahaha)... I displaced Moon just enough that he had to take an extra stride around 3rd and got stuck coming out...but he didn't get to shoulder the barrel. But hey...That makes 4 clean runs in a row!! We might finally be getting the hang of it. LMAO!!!

Truthfully though...I know my timing still isn't great around the 2nd barrel, but it's good enough that if I just DO NOT look down AT the barrel...we can clear it. Most of the time we are good at 3rd...if just depends on how I 'feel' when we come out of 2nd. Now that we are clearing the 2nd barrel, I have to concentrate doubly hard on 3rd...so I don't F**k up that turn. Thankfully, Moon is easier to 'read/feel' on that barrel, so as long as I keep thinking and don't lock up, we are golden.

I'm not going to lie...This was a rough trip. It's the longest trip, with the most runs in a row that Moon and I have ever done. Talk about a roller coaster ride...but what an exhilarating experience. Moreso than ever, I am in awe of what an incredible horse Moon is. I think he needed this trip as much as I did. Once we settled into it...we just started cranking out some pretty consistent runs. Not quite in the money...but clean and consistent and I was finally able to start feeling where we were losing time and helping to make up for it.

Let me tell you...It was a very expensive learning experience. I owe a HUGE debt of gratitude to my husband. He works so hard, long hours and sometimes weeks in a row without days off...And he never complains. Unlike so many people in my life that don't understand why things just don't come together for Moon and I, my husband is always 110% supportive and just keeps telling me, 'It will come honey.'.

Meh...Maybe it will and maybe it won't come together for Moon and I...but because of Moon and because of my husband, I will be ready for the next horse and it will seem like a piece of cake.
Posted by BrownEyed Cowgirl at 12:52 PM

You have a lot more stamina than I do! Glad the two of you are getting it all together!

I agree about the hauling being the hardest part. That and the Hurry up and Wait! And Wait! And Wait!!!! Sometimes you are better off skipping the last one and rolling home. As welcome a sight as the driveway is, it can also be a welcome sight in the rear view mirror.

Consistent, clean runs. Get it together and get it right and then just turn up the heat. Your husband is right. It will come together.

It's awesome that you have such a good support system in your honey man :)

I don't think I could ever rodeo seriously... I like home too much ;)

It must be nice to be home after hauling around for days and days! I hope you get a bit of a chance to rest and take it easy!

Sounds like your runs are coming along cleaner and more consistent - you guys will get in the money at some point - I just know it! :-)

Sounds like your honey is an awesome guy - it is great that he supports you and encourages you!

I don't know that I could do the big hauls that lots of people do - I was just helping out at a QH show close to home and some people were on week 2 of 5 hauling themselves around to shows all over the place - one guy was from the east coast - it would have taken 2-3 days to drive to where I live!

Fabulous that you're getting clean runs! You are running with some serious competitors and staying right up there on their tails. That is a huge accomplishment, and you should be pretty puffed up with pride!

The hauling is tough for horses. I make it a regular practice to get in the horse trailer and have someone drive me around. Good way to find out about banging doors, squeaking gates, missing rubber strips, and assess how the trailer really rides. (Trailer salesmen do look at me oddly when I ask for a ride in their trailers, but two trailers of the same brand sometimes haul and corner differently.) Comfy travel and good rest does make a huge difference for man or beast.

I looked at those numbers of miles traveled and groaned. Reminds me of my nationals trip so I can relate to how flat the butt gets. LOL

Sounds like you and Moon did awesome. That's very cool.

Ya you are lucky to have a supportive hubby, I do too...kinda he will support me but I am not even sure he know what cutting really is, lol.

But wow 4 clean runs in a row thats so awesome! And so close, you will be there in no time. And very true next horse will be easy :)