I Could Blame The Pig

I could probably blame Bugs' fit on the pig...but to be honest, he pulled back once before the pig ever showed up, so, meh...He's just that way.

Mercy had asked me the night before if I could wait to ride one of my horses until after she got home from school, so I said, 'Sure.' I specifically picked Bugs because he does not walk as fast as Moon and Frosty do. Those two wear poor Charmer out. Charmer (Mercy's horse) may be old, but he is one heckava horse yet and no way is he letting some young whipper-snappers out walk him. But its too much and I don't like making him have to keep up and then be sore the next day.

So Mercy and I saddle up and head to the desert and Mikey heads out to pick up a pig. Specifically a Vietnamese Pot-bellied pig that was found roaming around by a friend of hers.

Now, you guys know Mikey. That is just the way she rolls. Part of me is wanting to ask, 'What the heck do you want that pig for?' Most of me knows the answer. 'Just because!'.

Now me?...When I was growing up, we always had a butcher pig or two around, so our horses were quite used to them. But I know full well the effect seeing a pig for the first time can have on a horse. I watched my dad rope a pig one time and even though the horse he was riding was used to seeing the pig...when that pig came up the rope, squealing and charging...That horse L.O.S.T. it. He blew up, he tried to run off and he darned neared killed my dad. I don't think poor old Nevada was ever the same after that. Of course, none of us had any sympathy for my dad. As his age he should have known better than to rope a pig. But watching the wreck was funny as hell!!!

So anyway, Mercy and I get back from our ride and I see Mikey out there and every horse on the place is on high alert. Oohhh...She let the pig out of the trailer and it was roaming around the yard. I told Mercy to get ahold of Charmer and be prepared in case he noticed the pig. I gathered up my reins and got prepared in case Bugs saw it too. Bugs was actually more focused on Moon, who was high trotting around his pen, head up and tail flagging. Wished I had video of that...Moon looked quite pretty. LOL 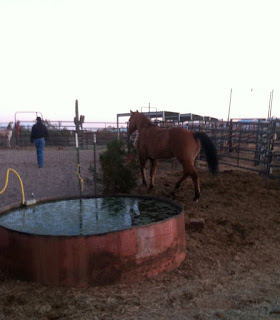 Mikey comes to help Mercy get in the yard, I tie Bugs behind the trailer and go to help wrangle the pig into the dog kennel. Moon is spazzing out, but instead of running away, he kept leaning over the fence. The pig, who is just wandering around comes strolling by Moon's fence and Moon goes into attack mode. OMG...Both Mikey and I were yelling at him and running to get the pig away from the fence. I'm pretty sure Moon would have come right over it and he was intent on KILLING that poor little pig. He was striking and stomping. His ears were pinned and his teeth were bared. I had the oddest thought cross my mind in that moment, 'Moon would have been a really nasty stud.'

We get the pig moved away from Moon's fenceline and he heads for the fenceline where Mikey's horses are. Apparently this pig really likes horses because that is the only place he wants to be...is next to wherever there is a horse. Mikey's horses were enthralled, but not aggressive like Moon was...

As you can see, Dolly and the pony wanted nothing to do with that pig...They stayed at the back of the pen the whole time.

Mikey gets some grain and gets the little pig to eating some... 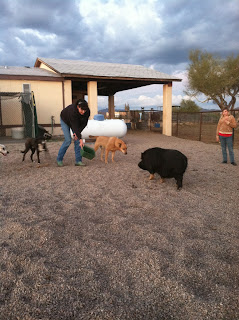 It took all three of us to ease little piggy into the kennel, but thanks to having worked at a pig farm in North Dakota...I do know how to move a pig. LOL. Pigs do not have good eyesight, so you have to move them kind of slow. We got the pig close enough to the kennel that we could encircle him and then we just crouched down and spread our arms. When the pig would take a step toward the kennel, we would move in. When he would turn to face us, we would wiggle our fingers and talk to him. I'm sure we looked hilarious from behind-all crouched down, arms spread and giving the pig some 'spirit fingers'. Mikey and I are trying not to laugh to loudly and Mercy was like, 'I don't know about this.' Oh my hell!!! But it worked. He finally eased into the dog kennel and started snarfing up grain.

I swear, we had no sooner shut the gate on that dog kennel and Mikey's phone rings...The pig's owner called to claim him. And THAT is how it goes at Mikey's house. ROFLMAO!!

Later, Mikey says, 'Well darn it, I wished the pig would have stayed around for a couple of days. He was a great training tool for the horses.' Personally....I was glad to see him go. Moon NEVER took his eyes off of where that pig disappeared to (in the kennel)... 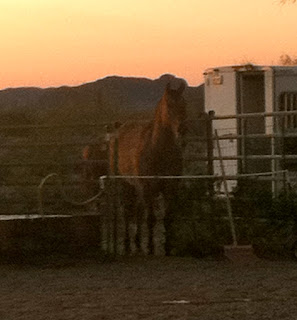 (Picture is a little grainy because I had to lighten it so you could see Moon. It was almost dark by then.)

I told Mikey, 'Well thank god it's gone. I would have had to go to town and buy a case of Ulcergard for Moon. The way he was acting, he would have been exhausted by Friday and in no shape to make a rodeo run.'

Of course, you would think that would end the excitement for the night, but NO! Immediately after is when Bugs had his fit and then Mikey takes off in the desert (in the dark...but armed!!) after a feral dog that has been running with the coyotes. He's most likely the reason so many pets have gone missing around here this last year and Mikey and Wade are pretty determined to eliminate him.

And so ends another day hanging with the Fearless Farrier crew. It all seems so normal...and then all hell breaks loose. LOL.
Posted by BrownEyed Cowgirl at 11:09 AM

Oh my goodness. Never a dull moment around there!! At least the pig's owner was found.
My show horse when I was in my teens, was terrified of pigs. When she was a 2 year old she was hauled up from California and it was in the middle of the night when they arrived. They put her in a pen... well that pen was full of pigs. So she spent the night in a pig pen and was traumatized. When I showed at the county fair, the horse barns were next to the pig barn and we had to lead our horses past the pig barn to get the the arena. It was horrible.
I am pretty sure my horses would not be able to handle a pig. I have not had them around one before. And I sure don't want to find out anytime soon!

HOLY CRAP!!!! That was freaking hilarious! I can just imagine the "piggy spirit fingers" you are right, too bad you didn't get a pic of that.

One time I took Trax on a long ride down the main road by our house. I went the opposite direction, than what I usually go. I knew there was a house that had pigs right by the road but I did not know that they had just purchased 20 piglets. You should have seen the look on his face when they ALL came running out oinking and barking at once. The next thing I knew we were in the middle of the road he was blowing and puffing like a steam engine. The look on his face was clearly saying, "What the heck are those things?!? They got no hair! That just ain't right, I'm outta here!" Luckily I was able to get him to the other side of the road before a truck came around the bend and killed us. I seriously laughed the rest of the day over his reaction to those pigs.

I'm glad you are reporting on what kind of hell is breaking loose at their place. I miss hearing Mikey stories, because she's got such a crazy life with everything happening all at once. That piggy looks adorable. I love the way they twirl their tails. I remember asking a teenage boy at a fair if there were any pigs around my kids and I could pet. He got this horrified look on his face and said, "You don't want to pet a pig. They're mean animals."

He was probably thinking, "Stupid city slickers. Don't they know that pigs are for eating?"

I'm just glad I haven't run into any javelina yet. Still, if I ever meet a pot-bellied pig, it will take all the willpower I can muster to not hug and squish it.

LOL! Good times!! I can only imagine what Lilly would do if she saw a pig... I have a fairly good idea, and it's not pretty! LOL

Just another average day with the Fearless Farrier crew! O the stories Mercy is going to have when she grows up.... wonder if anyone will believe her!

Good that you are seeing it all first hand and sharing! I miss Mikeys blog!
Moon is a tough dude!