Three Days On The Road-Run #2

The next day, I made it up to Norwood early in the afternoon. Just in time to get parked before it started pouring rain...again.

I had heard that it had rained hard at this rodeo the night before and the girls had to run in deep mud. I guess I was kinda hoping that it wouldn't rain again and the ground would have dried up a little.

Oh well...at least this time...everyone would be running in mud, so that at least levels the playing field.

This was Norwood's arena...AFTER they had bladed it and made some attempt to try to get it to dry... 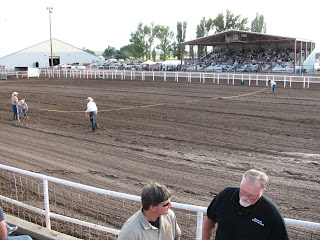 They did the best they could...but it was fetlock deep, sucking mud. I took Moon out there for a couple of quick sprints in it to get him a bit more used to slop hitting him in the belly and splashing his legs. Just walking him through it was work though. Each step was accompanied by a big sucking noise.

Again...not much you can do about it...either you make your run or you don't. There for awhile, I was actually contemplating running Spooks instead of Moon. As deep and sucking as that mud was, I was a little worried that big, old-long-strided Moon could/would pull something. I decided to wait until the very last minute to make the decision.

I was very happy that my hubby was home from working out of state and he jumped on his bike and rode up to spend the night with me. How he managed that ride without getting rained on was beyond me...I seemed to have had the misfortune to have driven through every single rainstorm for the past couple of days.

We watched the beginning of the rodeo and I just kept judging the ground condition as each event went on. By the time the mixed team roping started...I had to make the call and I decided to run Moon. The ground was getting less deep and less sticky.

I warmed Moon up in the sliding gag bit and was planning on running him in it, but he got to flipping the shanks around and it was irritating me, so I put his regular competition bit back on. This fairgrounds has a nice race track around it and I breezed Moon out pretty good once he got stretched out. He was acting pretty hot, but a nice breeze got his mind off of acting silly and he settled right down.

With plenty of time to spare, this time I got off and hand-walked him for awhile. This was a pretty slow moving rodeo...but I actually felt sorry for the people who had to work on foot in that mud. They were literally having to dig the little mutton busters out of the mud. The few that tried to walk back on their own ended up losing boots in the mud. LOL

With one more set of ropers to go, I eased Moon up and let him set amongst the ropers. I could feel his heart pounding and he was shaking...but he stood. As he watched the ropers go, he settled in, stopped shaking and his heartbeat became regular again. This scoring thing seems to be something that Moon really needs before a run...Well that and a little help from the OxyBoost. The scoring barrel horses during the team roping is something my mom learned from June Holeman.

When it was time, Moon was ready for his run. He did one spin out and then lined up for the gate. I started talking to him and telling him what a good boy he was and all kinds of other non-sense. He eased through the gate, found that first barrel and away we went... (Please forgive my husband's foul language at the end...He was a little excited ;-) PS. You will probably have to make it full screen to see it better...

Now...It's always best to run your own race...but in adverse conditions...it never hurts to listen when a friend advises you of the ground conditions. Another friend from my area ran right before me and as she was coming out and I was going in, she told me the ground was sticky, 'don't sit too soon'...since I watched her whack 3rd barrel because her horse rated too hard, I went with that thought when I started my run.

Ahahahaha...I waited until Moon's shoulder was AT first barrel and then sat...he was turning...but he went flying out the backside of the barrel....Oops...Guess it wasn't as sticky for Moon. :-/. He kept running though. You can see pretty clearly that little early rate thing he gives me at 2nd, that very often results in us hitting a barrel, but I am getting better at riding him through it and around the barrel. He faded off a little going to 3rd, but I wasn't going to fight with him in the mud. I just put all my weight in the outside stirrup and lifted as hard as I could to keep him from whacking the 3rd barrel...It worked.

The funny thing was...It was an incredibly slow time, under normal circumstances...an 18.73. But considering the mud...We were sitting 2nd. Up to that point the fastest time was an 18.70 from the night before. I don't think I have ever been so nervous as I was after that run. There were only 6 girls to go and was sure hoping we could hold onto a money spot.

The very next lady to run went in there and made this big, loopy run on a long-legged palomino horse. It sure didn't look like he was getting much done but he never really got bogged down in the mud either...He ran an 18.2. I was thinking, oh crap...our time really wasn't that good and we are going to get knocked out of the placing. I started walking Moon out, but stayed close so I could hear the times.

Another runner went and she had an 18.6...that meant I was in the last hole for money...Noooo...wait...They added 5 for a tipped barrel. Back to 3rd place. Next couple of girls ran in the nineteens. Two girls to go and I am just praying I can hang onto at least a 4th place check.

Whooo-hooooo....Moon got 3rd place overall and a CHECK!!!

Ohhhh....Myyyy...Gosshhhhh....I was sure ready for that. If we hadn't place in these last two rodeos I was going to just go back to working on the association runs and see if we couldn't improve a little more. It's darned expensive to go to these pro rodeos...and I can't justify just going and going if I am not in the money at all (More on that in another post ;-).

The hubby and I had been planning on going to the local honky-tonk after the rodeo, but by the time I got horses taken care of...I was pooped. This time, I did have to get up early the next morning to get to the next run...


Posted by BrownEyed Cowgirl at 6:36 PM

Congrats!!! Looked like a good run to me especially considering the mud! That is way exciting and I am so happy for you guys!!

Is there a non-pro rodeo circuit you could run?

Yeah! Congratulations! Can't wait to see what is next.

Way too cool! Even if there was some mud...

It's about time the money started coming in for you guys. Glad it is happening and can't wait to hear about the next run.

Yay for your hubs for making it there on the bike and getting a video too!

Loved hubby's comment, haha! I used to run a horse that would only settle down and stop trying to kill me when I got mad enough to swear at him. A dear friend just loved that horse, but was horrified that I'd call him such names...I gave him to her, and explained the cussing. She swore she'd never do that, haha! Next thing I hear is 'you rotten sob !@#$%^&*!!!!' and she just grinned at me sheepishly. Yup, some horses are like that!

Wow so much mud, but looks good and congrats on winning 3rd and a FAT check!!!!

Wow so much mud, but looks good and congrats on winning 3rd and a FAT check!!!!