Okay...so I have neglected to talk about the horses for some time now, and I apologize for that...but...
We have been on a holding pattern around here. Because of the unusually dry and mild winter we have had... 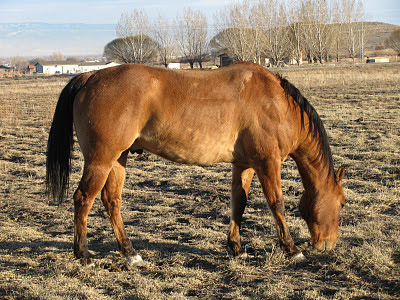 It has taken quite a bit of time and observation, but I can say with confidence that I now believe that ALL of the issues I was having with Moon were...
Ulcers!
*The continued loin pain
*The repeated stopping and almost acting like he had to urinate
*The raised, flagging, wringing tail
*The off stride
*The uncomfortableness associated with hauling
*The gate issues at the last few barrel races
*The nasty attitude and excessive rage toward the other horses
I'm fairly confident that if Moon had not jammed his back, I would have been much quicker to just assume it was an ulcer issue and switched him to a better ulcer product than what I was using. Buuuttt...the way it all played out...
Yea...life sucks like that sometimes.
Once I realized what the problem was, I switched Moon's feed and ordered some U-Guard. He is much improved.
Things will be handled much differently this coming year. I have lots of changes in mind.
Okay...sooooo....Anyone interested in a new blog???
This is someone I know in real life, who just started a new blog. She is a pro-level barrel racer and an absolute hoot. So stop on by and help me give her a little encouragement to keep on with her blog. If some of the stories she has told on FB were any indication of what life was like on the rodeo road...it'll be an interesting and often hilarious read!
Chasinthedream
Posted by BrownEyed Cowgirl at 11:14 PM

Not sure if you've tried it/heard of it... OxyMax. Its supposedly the only ulcer product that treats the foregut and hindgut.

Now, heading off to check out that blog :)

I hope the ulcer treatment helps ol' Moon. He (and you!) could use a break in the health dept.! :-)

Off to check out that blog - thanks for the recommendation!

God, ulcers makes perfect sense. If he was an endurance horse I'd have guessed them already, but for some reason it didn't occur to me. Even though he's in a high-stress sport spending hours in the trailer. :headdesk:

Cdn-I have been reading up on the Oxy-Gen products, particularly their Ulcer products. I need to get a hold of one of their reps and discuss what they think the best option would be for Moon. I believe he was suffering from high ulcers. That is one of the things that Sue talked about being a real problem for horses being hauled a lot and of course the stress of competition. That really explains a lot since the 1st signs WERE at competitions.

From what I have read on some forums is that some horses on the OxyMax will still show symptoms at competitions and still need the paste. I am thinking that I may be able to keep him on the less expensive U-Guard for daily feeding and invest in the OxyMax paste treatment prior to hauling and competition.

Things are going to be a bit different for Moon this year though. I realize he absolutely hates going to the local 4D runs. He is a lot more at ease at the rodeos. He prefers the wham, bam, make my run and I'm done style. Soooo....it will be pretty much rodeos only for him this summer. That was always my goal for him anyway and I think it is just time to quite messing around with him at the local level.

Sounds like you got a good plan for him, might as well do what he wants to do. I have not had much to do with ulcers, but makes me wonder about my Bailey horse if thats her problem even if shes not a competitor, she is a worrier.

Checked out the blog, looks like it should be interesting :)

Ohhh yeahhhh that would match about everything huh? We deal with that alot in the horse show world. I don't know why I didn't think of it either...

Hope you have it figured out, for Moon's sake.
Added the new blog to my blogroll.

Like you said, the back issues kind of threw everything off. It seemed like all the issues were related to that, so the ulcers were overlooked. I'm glad to hear he's improving, though, and hope he keeps feeling better!

The stomach problems must be distracting. I hope he will be better soon..and hooray for the new blog that you have shared.

You had mentioned the ulcers before and the U-guard. I have used them on my TB mare to see if it would help with her cribbing. No such luck.

Kat usually stretches out like he has to pee, but he holds it. If he would just drop and drain it... which he did at the show and was MUCH better behaved afterwards! then things would be different for him too.

I am planning our schedule of events for this year. Plenty of 'down time' at home in between, so hopefully there won't be any issues that crop up and inhibit our progress... HOPEFULLY!

Never had to deal with ulcers before but I hope this is it and can get a fix...also - how's the 'heading to the right' issue resolving itself?

I wish we had your weather. We're cold here :(

Yeah! Glad you found the problem! Off to see the new blog