Crap, I forgot to add the photos last night...I had to do a photo of the photo because I don't have a digital copy, so they aren't that great, but you get the idea. ;-)

One of the things I realized after my 1st run and told L, I never should have entered in the first 100 horses to run on the first day. Obviously, we had planned to be at the arena hours before we actually arrived, the night before and figured we would have plenty of time to watch the Xtreme 15 Race. I never bothered to enter Moon in any of the time-only's because I don't particularly worry about him spooking at anything (not that we would have made those anyway). Him seeing the arena before hand is not a big priority. It is for myself.

Seeing the arena beforehand and being able to watch some of the runs gives me a chance to get the feel for the arena, positioning and ground conditions. L had run at this arena before so was not running in blind like I was on the first day. I mean, I had taken the time to actually look into the arena, but there is no way to really watch a full run from the warm-up pen.

After L and I had run and taken care of horses on the first day, we went back up and watched most of the 200 plus runs yet to go. After watching about 50 runs, I turned to L and told her I was ready to run. She got a pretty good laugh out of that, but said that she felt bad she hadn't thought about the extra time I might take me to get mentally prepared to run when she suggested we enter the first 100. I didn't think of it either. Mostly we had just planned on getting our runs over with before the heat of the day. Another lesson learned.

On Sunday, I was better prepared mentally and after we all came to the conclusion that running Moon would be okay, L told me I needed to put that worry out of my head and get prepared to make my run. Luckily, this time, she ran well before me, got her mare put away and was in the stands ready to give me instructions.

One thing I have always hated is people who just scream at someone through their whole run. It's not cheering or hearing people holler, 'Yea, Go On' or hollering 'Sit' or 'Look' that bothers me...it's the incessant screaming of, 'Kick, kick, kick...Go, go, go...Sit, Look, Kick, kick, kick' through the whole run that drives me nuts. All you hear when you are running is a jumble of screams that usually make no sense at whatever point you are at. L is really good at pinpointing when to yell a specific instruction and just generally cheering at the right point. I cheer for L whenever I can as well because her little mare really responds to people cheering for her, the little show-off. LOL

Even though Moon had had a problem going in the gate the day before, I sort of prepared myself for him to not really want to go in this run. That was the one little niggling reservation I had left. I told myself if Moon didn't want to go in the gate that meant he was probably still hurting and I was not going to push him in the run. I would just let him coast, even if that meant slow loping the pattern.

What I almost wasn't prepared for was Moon walking through the side gate and charging through my hands TOWARD the barrels. I had just started to gather up my reins when Moon saw those barrels. He didn't try to leave, instead he gathered into a full bore charge, shooting straight toward the 1st barrel. I got my reins gathered up and the only thought in my head was, 'He wants this, ride the hell of it.'

I did too. I don't think I was pushing Moon very hard to 1st, but he was running, I just told myself to sit down about 2 strides before the barrel and let him come around. He did and never lost a step... 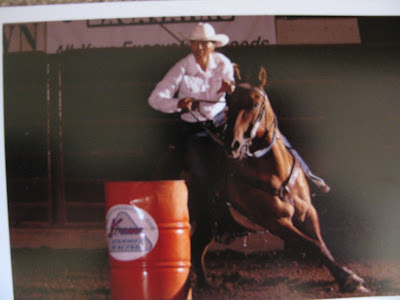 One problem I have been having is letting go of the horn too early and switching hands before Moon even really gets out of his 1st turn. I know I started to do this again, but only made it one stride before remembering to get both hands back on the reins to help keep Moon balanced all the way into his 2nd pocket. It worked. Moon almost wanted to rate a bit before the barrel, but I just drove him that one extra stride up into the turn and then let go of the outside rein... 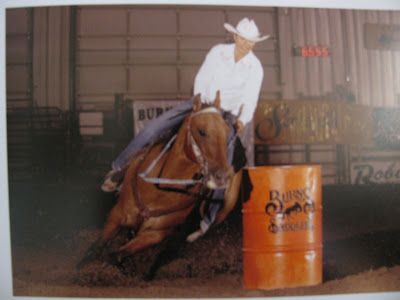 I knew I missed my last look spot on this turn because I remember looking at the edge of the barrel and telling myself, "Don't drop your shoulder or he is going to take that barrel out coming out of it.' He did roll right back around and I felt my leg brush the barrel, but it didn't even rock. (Whew)

Moon whipped around that second barrel and took off like a shot. I don't think I 2-handed him to 3rd (that was a bit of a blur). If Moon comes out of his 2nd barrel good, he doesn't really need help to 3rd. Just point him toward the pocket and let him run. I sat down a bit late at 3rd, which didn't affect Moon, but it did me a little bit. I wasn't quite sat down when he rolled around the barrel and I know I dropped my hand and shoulder. My chin dropped and I remember looking at the top of the barrel. My leg tinged the barrel and it rocked. I was saying to myself, 'Oh crap, oh crap, look up, look up.' I did and we made it out of there.

A HUGE, VAST improvement over the day before...don't get me wrong on that...but that run felt so darned good and I know Moon is so capable of clocking that I was a tad miffed our time had been that slow. As a matter of fact, we have had several really good runs this year and yet can't seem to make the times I thought we should make. I can't figure it out.

I sure enough wanted to find out where we lost all that time at and this barrel race had the perfect solution...

Even more yet to come...
Posted by BrownEyed Cowgirl at 6:15 AM

wow sounds like moon and you had an awesome run congrats

Sounds like a great run! glad you got in a good one and he seems better

What you did sure seems to have worked! I love the way you describe the runs, it's almost like watching a slo-mo replay. I'm guessing the split second lost would be coming out of the first barrel.

Wow he sure must have been feeling better to run like that!

glad you had a better second run! This series of posts is so interesting - I feel like I'm learning right along with you guys. I guess that would make me an armchair barrel racer! lol

Very cool that your friend L was there to help and cheer you on. Having good support must make a big difference!

Wow, what a weekend! Congratulations on your run, it's just getting faster and faster.

Awesome run! Can't wait to hear the end of the story!

Having support sure does help. It also really helps to have someone who will kick me in the butt and tell me to ride my horse. LOL

I think the treatments really did help. Moon hasn't felt that eager for awhile. It has not been much fun for me having the worry that he is harboring pain. He seems fine at home, we go somewhere and it starts up again. Pretty sure that makes it not much fun for Moon either. :( I believe Moon really does like to run barrels. I work hard to keep my horses enjoying their job and sure don't want them thinking that it is going to hurt every time they have to go run. Competing and doing well mean a lot to me, but not at the expense of my horse(s). Not ever having had a horse with a continuing issue like this before, it's been difficult to know exactly what is the right thing to do and I have been just trying as many things as I can to find and fix the root of the problem. We'll get it figured out. After all, there's only so many things that can be going on back there right?

>>Competing and doing well mean a lot to me, but not at the expense of my horse(s). <<


AMEN to that! Which is why I am trying to get Kat checked out by the vet before I really ramp up the training level and prepare for the marathon course and CDE competions. I want to know if there are ANY underlying issues Before we get rolling!

I was also wondering WTH that thing was by his head in the first pic. It's your hand! lol

Yea...That's my 'naughty' hand that doesn't want to stay on the saddle horn. LOL

All I could think of while you were saying how close you came to hitting those barrels (and tinging 3rd) is "OUCH those are metal barrels!"

I LOVE running in & out. Probably because mentally *I* need a lot of stopping distance lol

Stopping question - if its not a run out do you teach your horses to stop square at the gate or circle off?
I'm guessing that this event had interval timing...

LOL-I've been pretty lucky with not tagging myself badly on a metal barrel. Usually when Moon hits 2nd, it's his shoulder that nails it. You would think he would remember that wouldn't you? I felt the ting on 3rd, but it didn't end up leaving a bruise or anything.

Stopping depends on the horse. Spooks and Frosty have really nice good Whoas. I like to stop them straight. Moon has an atrocious stop, so we circle. He has tried to cheat me a few times and the last run in Cedaredge, he ducked off as soon as I looked over. I will have to work on stopping him straight a few times, which probably is going to hurt...ME.

And Yup...You guessed it. I am totally fascinated by the interval timing report. Never had an opportunity to have one done before. Very excited to see if this helps improve our times.